Lilies of the Field

Lilies of the Field (1963), based on the same-named novel by William Edmund Barrett that was published the year before, is an excellent, small-scale humanist drama. Shot on a low budget and short shooting schedule (two weeks) by director Ralph Nelson, the film stars Sidney Poitier, who for his efforts became the first African-American to win the Academy Award for Best Actor, following Hattie McDaniel's Supporting Actress win for Gone with the Wind. It was also one of the most successful films ever made relative to its budget: it cost just $245,000 yet grossed as much as $7 million.

Wisely, James Poe's screenplay does not attempt to expand the scope of the original novel. It runs a brisk 94 minutes and other than Poitier the cast is composed of performers unknown at the time to mainstream audiences, greatly increasing the story's believability. 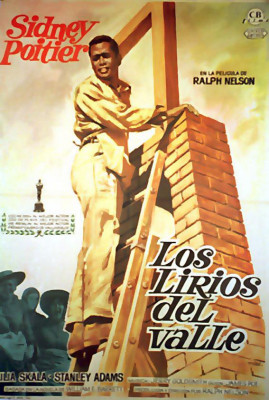 Homer Smith (Poitier) is a carefree, itinerant handyman touring the American West, living out of his station wagon. When his radiator overheats, he stops at a small farm in the Arizona desert looking for water. There he finds a group of women, Catholic nuns from East Germany, Austria, and Hungary who speak little English. Mother Maria (Lilia Skala) believing "Schmidt" has been sent by God, hires him to patch their leaky roof, but when he goes to collect his day's wages, she continually stalls for time: insisting he join them for their meager evening meal, that he teach the nuns English, stay the night, etc., and the following morning finds more small jobs for him to do.

At first, Homer finds the nuns a bit peculiar if amusing, but eventually he begins to realize that Mother Maria has no intention of paying him nor letting him leave, for she has bigger fish for him to fry: she wants Homer to build them a chapel for the local, mostly poor Hispanic community, currently receiving mass out of the back of a trailer. Homer resists but Mother Maria, very pushy and insistent, convinces him to stay though one big problem stands in the way: not enough adobe bricks, lumber or anything else with which to build the dream chapel.

Homer takes a part-time job at a construction company owned by Ashton (director Ralph Nelson, appearing uncredited), racist in the beginning (he calls him "boy") but soon impressed by Homer's work ethic and skill with heavy equipment. Homer uses that income to buy the nuns decent food to eat - they'd been subsiding on the potatoes, eggs, and milk from the farm - but Mother Maria pointedly thanks God for this bounty, not Homer. Homer soon becomes obsessed with building that chapel, but frustrated by the dearth of building materials. Will he stay long enough to finish the job?

Lilies of the Field plays as well as it does because it strenuously avoids the kind of sickly-sweet sentimentality that would seem unavoidable with this sort of story. This is achieved mainly through the relationship between Homer and Mother Maria, she cajoling, pushing, and ordering Homer about to complete work her nuns can't do, either because they're not physically able and/or lack the necessary skills. For her, the ends justify the means: soliciting work she has no intention to pay for, chastising and bullying Homer into submission. Her background, leading her nuns out of East Germany just as the Berlin Wall was going up, is mentioned several times but never detailed because no explanation is required. That's because it's clear her force of personality got them to the safety, by whatever means necessary. As Homer settles in, albeit always ready to bolt at a moment's notice, buying the nuns groceries they otherwise never could have afforded, Mother Maria stubbornly refuses to express any gratitude, at least to Homer. Yet it's also clear that her unflinching sternness is a survival tactic. It got her out of East Germany and now it's going to get that chapel built.

Poitier is excellent throughout though it would be several more years before he both completely shed that symbolic nobleness and grew into a genuinely great actor of both comedy and drama. Poitier and Nelson reteamed for the unjustly forgotten The Wilby Conspiracy (1975), a picture exemplifying Poitier's talents at full flower in a film at once harrowing and hilarious, not to mention refreshingly blunt in its politics.

Skala, born in Austria to Catholic and Jewish parents, fled Nazi Germany and was an acclaimed architect as well as an actress. Her film and TV credits are spotty and eccentric. After being nominated for an Oscar here she was snapped up by Stanley Kramer for Ship of Fools (1965) and had memorable roles late in life in Testament (1983) and House of Games (1987) but she also appeared in such unlikely parts as Lisa Douglas's mother, "The Countess," on Green Acres. She died in 1994 at the age of 98.

Previously released as a (sold out) Twilight Time release, Kino's Blu-ray of Lilies of the Field appears to utilize the same crisp black-and-white transfer, the film presented in 1.66:1 widescreen. Shot by veteran DP Ernest Haller, the film is visually quite attractive for such a quickly-shot film. The DTS-HD Master Audio (2.0 mono) is above average and optional English subtitles are offered on this region "A" encoded disc.

Other than a trailer, the supplements are completely different from Twilight Time's release. Gone is that label's commentary track, isolated score, and audio commentary, the latter replaced with a new one by film historian David Del Valle.

I had avoided Lilies of the Field for decades, wrongly expecting a cloying melodrama. Though it teeters a bit in that direction a couple of times, mostly it's an engrossing, character-driven humanist tale, one Highly Recommended.