La piscine (aka The Swimming Pool)

First released to DVD as part of a five-film Alain Delon set by Lionsgate, Criterion's new Blu-ray of La Piscine (1969, called The Swimming Pool on DVD) is a beauty, a gorgeous restoration of director Jacques Deray's outstanding psychological drama-thriller, with the disc chockful of intriguing extra features.

The film was just wrapping production near St. Tropez along the Côte d'Azur when on October 1, 1968, one of Delon's bodyguards was found murdered. Delon's movements were investigated and he was held for questioning, though he was never charged with the still-unsolved crime. Nevertheless, the scandal was the talk of Europe for many months and never entirely went away, cementing Delon's dangerous image and forever blurring his offscreen life to film roles like Purple Noon (Plein Soleil, 1960) and this one. 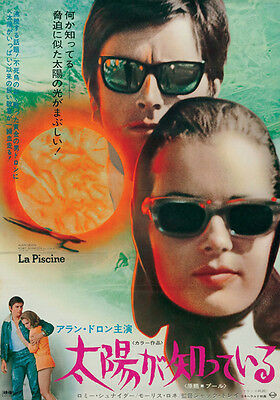 La piscine reunites Delon with his Purple Noon co-star, Maurice Ronet, and Delon's real-life former lover and frequent onscreen partner, Romy Schneider. Here Delon plays Jean-Paul, a failed writer-turned unhappy advertising agency employee, a recovering alcoholic who had once attempted suicide but who now seems blissfully happy vacationing at a villa on the French Rivera with Marianne (Schneider), with whom he has lived with for two-and-a-half years but never married. Theirs is an intensely sexual relationship, with much lovemaking in and around the unusually large swimming pool. So happy are they that they almost never go into town or socialize with others.

When I last saw the film on DVD some 13 years ago, I liked the film but found it a bit too understated and leisurely in its pacing, but that vanishes with added clarity of this 4K restoration: the subtleties of the performances come through much better in high-definition. In high-def, one can better study the faces of the four main characters, with Penelope, for instance, clearly disturbed by her father's subtle digs at Jean-Paul, his flirtations with Marianne, and his uncomfortable physicality and comments regarding her, his barely-adult daughter. Outwardly, Jean-Paul and Harry chat about ordinary matters, like Harry's extravagant purchase of a Maserati, but there's an undercurrent of genuine resentment felt by both men. For her part, Marianne seems unfazed by Harry's touchy-feelyness but doesn't exactly spurn his advances, either.

Is she oblivious to the tension she and Harry generate? Is she passive-aggressively trying to punish Jean-Paul? Against much initial objection, Delon insisted on Romy Schneider's casting (Angie Dickinson was a contender for the part), Schneider up to that point was still regarded as something of a lightweight actress tied to her seminal early role as Sissi (1955) and its two sequels, filmed made in her native Austria when she was still a teenager. La Piscine helped establish her as one of France's greatest film actresses; more challenging roles, especially in films directed by Claude Sautet, soon followed.

In La Piscine, Schneider not only underscores her adulthood with its frank sexual content, but also Schneider as an actress specializing in parts where she uses her raw sexual appeal as an empowering tool. Possibly aided also her Austrian roots, Schneider could, as here, play characters physically passionate but also coolly ambivalent, ones able to honestly assess the value of each relationship. All four leads are superb, but Schneider's is the one that viewers invariably pay the most attention to.

As noted in the extra features, La piscine has a fascinating visual style, described by one of the writers as claustrophobic, even though most of it takes place outdoors. Interestingly, Deray shoots these exteriors mostly in wide shots, while nearly all the interiors of the villa are in tight, cramped medium and close shots, so much so that one never gets a sense of the layout of the villa, or spatial relationships from one room to another.

The picture is very much everyone's idea back in the late-1960s of what a sophisticated French art house-type movie was supposed to be. Delon and Schneider are very sexy together in scenes of poolside love-making, there's some nudity, and it subtly touches on heretofore taboo issues that were only beginning to be depicted in American movies: adultery, rough sex, creepy incestuous longings. Characters bask in their French Riviera villa among cool cars eat then-exotic Chinese food (appallingly served with Uncle Ben's Instant Rice, however) and surrounded by swingin' '60s furniture people pay a fortune for these days.

Remastered in 4K from the original camera negative, Criterion's Blu-ray of La piscine, in 1.66:1 widescreen, looks about as perfect as a late-‘60s color film shot in that format could ever get. The image is razor-sharp and the color bright and spot-on. The mono audio, from the original 35mm magnetic tracks, is likewise flawless. Optional English subtitles are provided on this region "A" encoded disc.

The supplements are bountiful and very worthwhile. Unusual for the period, La piscine was shot twice: once in French and a second time in English, taking advantage of the speaking abilities of the four leads (though Ronet's is heavily-accented). That version, The Swimming Pool - "First Love Never Dies", is not a shot-for-shot retaking of the original French version and offers some interesting if slight differences. Best of all, it's only in slightly less pristine condition than the French version.

Also included is an excellent, half-hour retrospective, Fifty Years Later (2019), directed by Deray's widow, Agnès Vincent-Deray and featuring Delon, Birkin, screenwriter Jean-Claude Carrière, and novelist Jean-Emmanuel Conil. It's enlightening and amusing, though a bit of a jolt to see Birkin and especially Delon suddenly so old, with Delon looking rather frail following his stroke, though his mind is sharp. Somewhat contradictorily he states that he can't watch the famed film since the premature deaths of Schneider, Ronet, and Deray. He eerily recalls Schneider's son playfully seated on a swinging chair prominent in the film. The son later died in a horrific accident that hastened his mother's death.)

Also included is a video essay by Nick Rees-Roberts on the film's legacy. It comes off as a bit pretentious but is undeniably and admirably researched and informative. About 15 minutes of black-and-white and color behind the scenes footage captures Delon and Schneider reuniting at an airport at the start of production, an extended conversation between Ronet and Deray, and a somewhat tabloidy interview in German with Schneider. English and French trailers are included, along with an alternate ending used in Spain and other markets that completely ruin the ambiguity of the final scene. (Confusingly, there's also footage with a camera assistant's slate, its appearance unexplained.) Finally, a booklet essay by film critic Jessica Kiang sheds additional light on the film.

A classic of late-'60s French cinema, La piscine holds up very well today and both Criterion's presentation and its hoard of extra features make this one of the best Blu-ray releases of 2021. A DVD Talk Collectors Series title.