No Time for Love 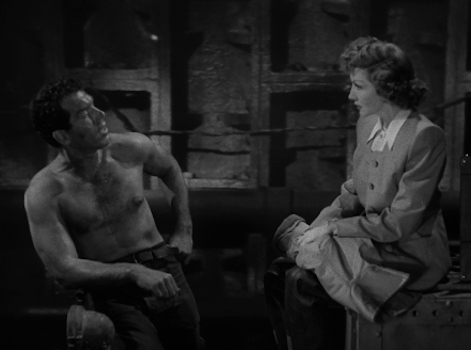 No Time for Love (1943) is the most polished and enjoyable of the three Claudette Colbert-Fred MacMurray romantic comedies that Kino Lorber has released on Blu-ray this summer. (The others are a pair from eight years earlier: The Gilded Lily and The Bride Comes Home.) Screenwriter Claude Binyon returns once again, but director Mitchell Leisen (Arise, My Love, Midnight) is a notable step up, offering a stylish eye and snappy sense of pacing.

The story this time around has Colbert as New York photojournalist Katherine Grant, wealthy and successful, despite a tendency to lose sight of the humanity of her assignments in favor of interesting geometric shapes. Kate's orderly sensibility is thrown for a loop when she is assigned to photograph a crew of "sandhogs" building a subterranean tunnel. MacMurray, shirtless and full of sass, is James Ryan, a sandhog who ends up suspended from his job when Kate photographs him getting into a fistfight with his coworkers.

The photo wasn't supposed to be published, of course. Kate's boss -- and boyfriend -- Henry Fulton (Paul McGrath) swiped the dramatic shot from the developing bath to sell papers. Kate feels so bad about Ryan's lay-off that she offers him a job as her photo assistant to mitigate the loss of wages. Intrigued by this kooky upper-crust dame, Ryan agrees.

Kate finds herself fixated on Ryan -- dramatized delightfully at one point in a loopy, proto-Spellbound dream sequence in which MacMurray becomes a superhero -- and figures the best way to become unfixated is to spend more time with him. Of course, they both just end up realizing that, despite themselves, they're pretty fond of each other.

There's a fair amount of culture clash humor, with Kate's high-class friends marveling over the "primal" Ryan, while Kate tries to talk sense into some of Ryan's worker pals -- only to have the men collapse into wild brawling. Ilka Chase and Richard Haydn are both great high-toned confidantes for Colbert's befuddled heroine; Chase plays her quirky sister while Haydn plays a piano-playing moocher with a Brad Pitt-like eating habit.

Director Mitchell Leisen is sometimes dragged for being a former art director who never stopped thinking about sets first. One is tempted to see Kate's photographic preference for attractive inanimate objects as a knowing commentary on this perception of Leisen. As a director, Leisen never lets down the characters or story in No Time For Love. But one must admit that the tunnel construction site featured throughout the film is one humdinger of a set. I wonder if James Bond designer Ken Adam got some ideas for how to construct a villain's lair from the detailed work on this tunnel.

As always, Colbert and MacMurray have a shared magnetism that makes their scenes together a real delight. No Time for Love is a terrible title, but it does allow me to say: If you like classic romantic comedies, make time for No Time for Love. Thank you. 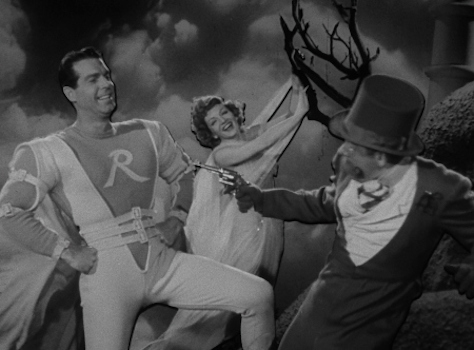 The Video:
Maybe because it's almost a decade newer, this AVC-encoded 1080p 1.37:1 presentation looks notably better than the other two Colbert-MacMurray releases Kino Lorber put out this summer. Still some mild speckles and damage, but depth and clarity is more consistent and stronger overall. A very satisfying transfer.

The Audio:
No complaints from the DTS-HD MA 2.0 mono soundtrack. Dialogue is always clear and understandable. Music and effects are well-balanced and effective. No major noise or damage. An English subtitles track is provided; I noted a few minor errors -- the transcriber has never heard of Abie's Irish Rose, I guess -- but nothing that is egregious or majorly confusing.

- Another first rate discussion from Pinkerton, combining history and analysis with wit and style.

Final Thoughts:
One of the best pairings of Claudette Colbert and Fred MacMurray. Highly Recommended. 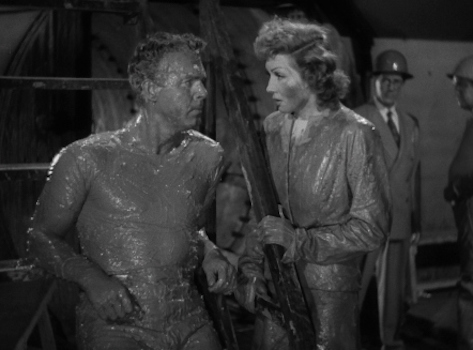