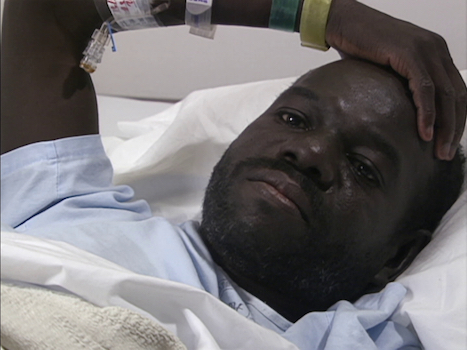 One of the many artists we lost to the AIDS epidemic, Marlon Riggs was a documentary filmmaker whose work incorporated performance art, poetry, music, and dance. A black gay man, Riggs's work engaged with issues of identity and perception, in the realms of race, sexuality, and gender. Criterion has issued a vital new set containing all of his directorial work from 1987 to 1995 (his 1981 thesis film is slotted in as a supplement rather than part of the main program), titled The Signifyin' Works of Marlon Riggs.

The first film in the set is the hour-long Ethnic Notions (1987), which traces the portrayal of black people in American pop culture from the colonial days to right around World War II. The belated banishment of Aunt Jemima and Uncle Ben aside, modern pop culture tends to not only shun obviously racist caricatures, but to ignore their prior existence. (Unless, of course, that painful history is part of a creator's point, as in Bamboozled or a few episodes in Tales from the Hood 1 and 2.) In that way, Ethnic Notions can be both intensely eye-opening and terribly depressing. Riggs's film explores such stereotypes as the Sambo, Jim Crow, the Zip Coon, the Mammy, the Pickaninny, and the Uncle, showing the way these harmful images sprung up in advertising and performances at different times in reaction to the progress -- and attempts at progress -- that black people made in American society. The film also explores the tradition of blackface and the way that working black actors were forced to take roles that fed into demeaning stereotypes meant to subjugate their people.

The Signifyin' Works set is organized in chronological order, but the later film Color Adjustment (1992) -- found on disc 2 -- is essentially a direct sequel to Ethnic Notions, continuing this study of representation into the television era. While Ethnic Notions sticks to academic talking heads to explore the history and ramifications of these images, Color Adjustment talks to some of the performers and producers who helped fabricate them. This includes Diahann Carroll, who at one point admits she thought that the infamously stereotypical Amos 'n' Andy sitcom was, well, sometimes kinda funny. (Riggs picks a few sharply written clips to prove she's not wrong.) This revelation demonstrates Riggs's willingness to problematize all of these representations without then turning to cut-and-dry condemnation.

Producers like Hal Kanter, Sheldon Leonard, and Norman Lear discuss attempts to create positive or honest images of black characters on TV -- only to realize later the problematic nature of their well-intentioned choices. For example, the serious subtext of the family show Good Times is pushed aside once Jimmie Walker's buffoon-ish turn becomes the most commercial aspect of the show.

Both of these docs are more straightforward than Riggs's other work in the set, but Riggs does craft one particularly canny sequence in Color Adjustment that demonstrates the filmmaker's ornery sense of humor. In discussing the short-lived Nat "King" Cole Show, Riggs shows a series of white TV producers talking about how they loved Cole, his voice, his smile, and how "gentlemanly" he was. It doesn't take too long for the viewer to get the sense that Cole is being touted as a "good" black performer -- in other words, unthreatening to white producers as much as white audiences. Riggs lets these men essentially tell on themselves but he is subtle enough about it that inattentive viewers could just take the interviews at face value. 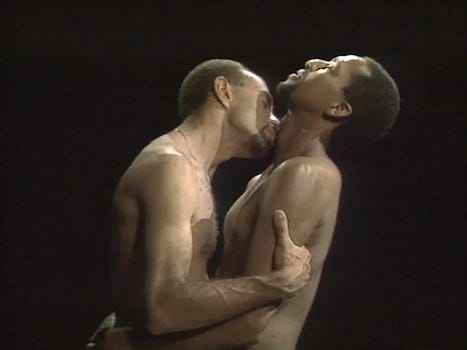 Riggs gets more personal in Tongues Untied (1989), the masterpiece in this excellent collection. Combining testimony, poetry, and dramatic monologues, among other creative approaches, Tongues Untied examines the complicated identity and struggle for justice for black gay men. Being gay does not guarantee acceptance among the white gay community: even within this purportedly safe space, men like Riggs, poet Essex Hemphill, and playwright Reginald T. Jackson found themselves "other"ed. Their stories and their art form the backbone of Tongues Untied, but Riggs's approach is kaleidoscopic, incorporating a segment on voguing (as also glimpsed in the doc Paris Is Burning), a doo wop song about men loving men, and a comic sketch about the various flavors of finger snaps that can be used as a rhetorical device (does Damon Wayans owe his whole "Men On Films" snaps shtick from In Living Color to this doc?).

Tongues Untied is oddly infamous. Not for its insight or creativity, sadly: the film became the center of controversy when it aired on public television, for daring to show black gay men kiss and talk about their desires. The usual conservative suspects -- Jesse Helms, Pat Buchanan, and the like -- pointed to Tongues Untied as evidence that public television and the National Endowment of the Arts should be defunded. How sad.

The next two short films in the set, Affirmations (1990) and Anthem (1991), play like codas to Tongues Untied and reuse certain scattered bits of footage. Affirmations begins with Reginald T. Jackson in raconteur mode, discussing his first time sleeping with a man, and then shifts to footage of protest marches and overlapping audio testimonies of prejudice and pain. It's a simple agit-doc rooted in emotional honesty. Anthem is more of a montage-manifesto set to house music. Like Tongues Untied, it combines dance, poetry, and passion, but with a more in-your-face attitude. One amusing and erotic bit has poet Essex Hemphill talking about cock rings as a kind of lovers' sacrament.

While AIDS is part of the discussion in Riggs's previous films, it comes to the fore in "Non, Je Ne Regrette Rien" (No Regret) (1993). Riggs shares the anecdotes and opinions of five HIV-positive gay black men, including poet and performance artist Assoto Saint and AIDS activist Reggie Williams. They discuss the unjust stigma related to AIDS and how it creates the need to "come out" again, about having contracted the disease. Their anger and honesty is still affecting after all these years.

The final film in the set, Black Is... Black Ain't (1995), was completed after Riggs's death, and it incorporates footage of the director discussing his waning health from his hospital bed and leaving instructions for his producers and editors on how to finish certain sequences. His story is inevitably sewn into the fabric of the film, contrasting personal histories with the history of American black people. The subject of identity resurfaces again and again, as Riggs demonstrates the way that the black community tries to define itself in ways that often exclude major swaths of people. Skin tone and "good hair" and money and education are just some of the factors that are Riggs pinpoints as arbitrary weapons wielded to determine "true" blackness. Riggs explores how religion's deep roots in black culture is used to stigmatize and alienate queer people in the community.

Black Is... Black Ain't is the most ambitious film in the set, and the diverse subject matter of its many story threads can make it seem a little unfocused at times. But the discussion -- from talking heads like Angela Davis and Cornel West -- is always thoughtful and provocative. The threads left untied and questions left unanswered seem like an integral part of Riggs's approach anyway.

The Signifyin' Works of Marlon Riggs is a long-overdue elevation of this filmmaker's work to the mainstream cinephile canon. 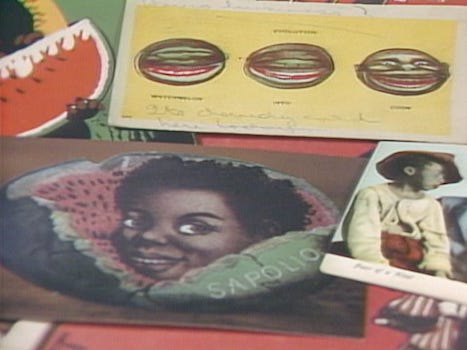 The Blu-ray
The Signifyin' Works of Marlon Riggs is presented on 2 Blu-ray discs, housed in a digipak, with the discs on overlapping hubs. The digipak has a sturdy cardboard slipcover and features a 46-page booklet inside, containing program notes and an essay by K. Austin Collins.

The Video:
The films are all presented in AVC-encoded 1080i 1.33:1 presentations that are upscales from original SD sources. These presentations are all decidedly dated, with inborn analog limitations but no major dropouts or instability.

The Audio:
The short films Affirmations and Anthem are both presented in LPCM 1.0 mono mixes, while the rest of the films feature LPCM 2.0 stereo soundtracks. Riggs frequently overlaps elements on the soundtrack, including music, voice-over, and field-recorded discussions. The effect is well-preserved in this presentation. One subtitle option for these films: English SDH.

(HD, 23:02) - An introduction to the Criterion Channel's presentation of these films. It's a Zoom conversation between professor and Riggs's friend Vivian Kleiman, young filmmaker Shikeith, and Criterion curator Ashley Clark. Like many of the discussions that follow, it explores Riggs's life, his approach to filmmaking, and his lasting impact.

Final Thoughts:
Marlon Riggs blended the personal and the political with the rigor of a journalist and soulfulness of a poet. His work is absolutely essential viewing. DVD Talk Collector Series. 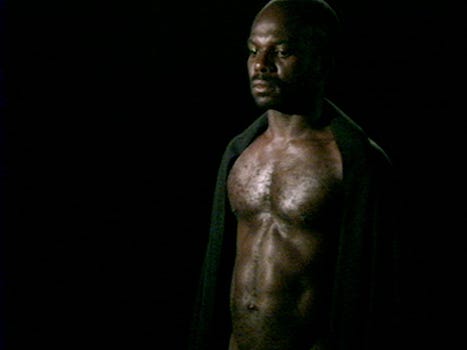