Some years back my friend Stephen Bowie, a television historian, interviewed prolific character actor Jason Wingreen, then about ninety. Wingreen had appeared in hundreds of television shows, including Twilight Zone, Star Trek, and Seinfeld, but was probably most familiar the bartender, a semi-regular role, on All in the Family and its follow-up, Archie Bunker's Place. Wingreen seemed happy enough to discuss his long career with Stephen, but he was very insistent, almost obsessive, that Stephen absolutely not share his contact information with anyone else. Why? An acting job from long ago that couldn't have taken up more than an hour of his time was as the voice of Boba Fett in The Empire Strikes Back (1980). Though he wasn't even credited in the film and spoke maybe a dozen words, Wingreen was worried Star Wars fans would find him and besiege him with requests for autographs and who knows what else.

Elstree 1976 (2016), in part, explores that strange facet of fandom and celebrity. A fascinating documentary, its focus is ten or so actors who appeared in the original Star Wars. One of these is David Prowse, who gained a certain fame as man inside (but not the voice of) Darth Vader, but who also appeared in other famous movies, including Stanley Kubrick's A Clockwork Orange. Another is Jeremy Bulloch, who never had much to do beneath the helmet of bounty hunter Boba Fett, but was a familiar established actor, far more prominent in movies like the Cliff Richard musical Summer Holiday (1963). (As Boba Fett, Bulloch wasn't in the first Star Wars at all, so he feels a bit out of place in this crowd.)

The others, more interesting in their way, had smaller, sometimes tiny credited parts, or were glorified extras filling out crowd scenes. The thing is, though, Star Wars is so engrained in the public consciousness, when clips from Star Wars identify Elstree 1976's interview subjects, freeze-framing the image and zeroing in on their often-fleeting roles, there's a tendency on the part of the viewer to respond, "Oh, he's that guy!" 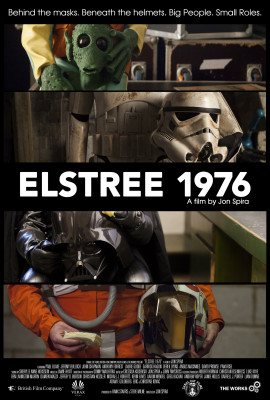 As young aspiring actors (and Pam Rose, an actress-model), they regarded their work at Elstree Studios in the late spring and early summer of 1976 as just another job. Some thought it a trifle, a made-for-TV movie, though one, Angus MacInnes, who played Gold Leader, one of the rebel pilots attacking the Death Star, was impressed by the worn look of the spaceship sets, and instinctively knew they were in the midst of something special. Many had encounters with George Lucas, who offered little in the way of direction and seemed so unlike most directors, one of the actors featured in Elstree 1976 thought he was a member of the crew and actually had Lucas fetch him a cup of coffee.

Though most were immortalized as plastic action figures, Star Wars did little to advance their careers. Some of the actors' faces were hidden behind helmets or rubber masks or mounds of makeup and in some cases their regional British accents were dubbed with American ones. Some fell on hard times only to find income appearing at science fiction conventions, signing autographs, though those playing uncredited bit and extra roles faced discrimination from some of the credited actors, who felt they had no business being there, encroaching on their turf.

The strange hierarchy within this unique world drawn from Central Casting is one of the strangely beguiling qualities of Elstree 1976. Actors who'd done Shakespeare on the London stage have mixed feelings about being chiefly remembered for a tiny part in a movie made 45 years ago. Some find comfort interacting with the mostly not-crazy fans while others struggle to put that life-defining experience behind them with other creative pursuits.

In the late-1990s a friend directing a documentary about Hammer Films asked me to drive David Prowse from his hotel to the location where Prowse was to be interviewed, for no reason other than I had the biggest automobile to shuttle the 6'6" former bodybuilder. Prowse was, on a personal level, quite warm and friendly but also bitter about certain aspects of his career, especially a falling out he had with Lucas after the completion but before the premiere of The Empire Strikes Back, a mutual resentment that apparently lingered until Prowse's death last year.*

Nevertheless, Prowse expressed to me his strong desire to reprise his character when Darth Vader undoubtedly returned at the end of the new Star Wars trilogy being made at the time. Like a lot of extremely tall men, Prowse even then, in his 60s, walked with extreme difficulty and struggled to get in and out of my car. "This guy thinks he'll be able to play Darth Vader again?" I wondered. But he was an actor and this was his baby. No wonder he hoped against all hope.

One sees similar indefatigable determination in much of Elstree 1976's cast. As one says, "I've got a really good feeling about this year, that good things are about to happen."

Shot digitally in high-def for 1.78:1 widescreen, Elstree 1976 is up to contemporary video standards, some behind-the-scenes clips from Star Wars (and what sure seems like recreations) look great, as do the smattering of film clips from that and other films. The 5.1 audio is likewise fine.

No supplements are noted on the packaging but they're fairly extensive and include 45 minutes' worth of extended interviews, a tour of Elstree Studios as it is today, and an audio commentary track by director Jon Spira.

Elstree 1976 would make good companion viewing with several other similarly-themed documentaries, including Life After Flash (2017), about Flash Gordon star Sam J. Jones; and, oddly enough, the touching Life After Tomorrow (2006), about the cutthroat world of child actors cast in and eventually cast from the musical Annie. Elstree 1976 is one of the best examples of this type of documentary, and Highly Recommended.

*Prowse's bitterness was not limited to Star Wars and George Lucas. He's the only talent I've encountered who absolutely loathed Christopher Reeve, whom Prowse trained for Superman (1978).