Chariots Of The Gods (also includes Mysteries of the Gods)

Cinema-wise, the 1970s was a strange time. When Rocky (1976) was a brand-new movie, audiences and critics alike embraced it, understandably, but what a lot of people don't remember is the praise heaped on star Sylvester Stallone. Look up some of those early reviews and you'll be surprised to learn that many critics thought Stallone was the next big thing in motion picture acting, a successor to Marlon Brando, no less.

Similarly, the granddaddy of speculative, pseudoscience documentaries, Chariots of the Gods (1970), received shockingly good reviews. It was even nominated for an Academy Award as Best Documentary feature and, as VCI's new Blu-ray's back cover text notes - twice! - it has since been recognized by the Academy as one of the Top 100 Documentaries of All Time. It was also a huge commercial success: it couldn't have cost more than $500,000 to make, yet grossed nearly $26 million (sources are unclear if that's for the U.S. and Canada or worldwide), was the sixth-highest grossing movie that year, incredible for a documentary even now, and ranks among the most profitable movies (relative to its cost) ever made.

Its success spawned an entire subgenre of speculative documentaries that included The Outer Space Connection (1975), In Search of Noah's Ark (1977), Beyond and Back (1978), In Search of Historic Jesus (1979) and, of course, the long-running syndicated television series In Search Of....

Partly because Chariots of the Gods was the first of its kind, partly because it was directed by Harald Reinl with music by Peter Thomas, both whom had done exemplary work in West German krimi films, I expected the picture to be entertaining and more polished than the cheaper, Sunn Classics-type movies that followed.

Instead, I found Chariots of the Gods awful to the point of being nearly unwatchable. It's a contender for the worst movie ever nominated for an Academy Award. 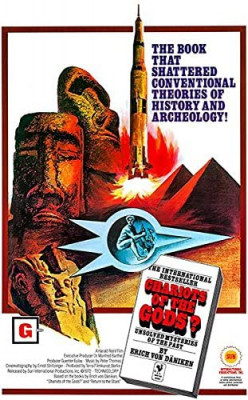 The film is an adaptation of Erich von Däniken's book Erinnerungen an die Zukunft: Ungelöste Rätsel der Vergangenheit, published in West Germany in 1968 and quickly translated into myriad languages, including an English edition by Michael Heron as Chariots of the Gods? Unsolved Mysteries of the Past. Though rejected by numerous publishers and apparently heavily rewritten by its editor, screenwriter-film producer Wilhelm "Utz" Utermann, the book became a runaway bestseller, with 70 million copies sold around the world by 2017.

The basic thesis of the book and the movie is that "ancient astronauts," beings from outer space, came to earth and provided technologies enabling ancient civilizations the means to build such structures as the Egyptian and Mayan pyramids and the Moai of Easter Island. In turn, these alien visitors came to be regarded as gods, immortalized in tomb paintings and statuary.

The globe-trotting film offers whirlwind visits to many such places, its narration a laundry list of the characteristics of pseudoscience. Most prominent among these, repeated again and again throughout the film, presents artifacts such as Japanese Dogu figurines and Mayan cave/tomb paintings and statues, while claiming they obviously depict figures wearing space helmets, are clearly sitting in space capsules, or plainly wearing spacesuits. Clearly, insists the confident narrator, no other explanation is possible. Can you prove it didn't happen?

Emphasized again and again is the inexplicable construction of various pyramids, great stone walls and statues, the narrator tiresomely rattling off the approximate weight in tons of each massive, single stone. While theories vary about construction techniques of these ancient objects, built using highly sophisticated technologies lost and rediscovered through the centuries, Chariots of the Gods cherry-picks its theories albeit with great certainty of their validity.

Unlike the later In Search Of TV show, which presented multiple theories to each week's "investigation," allowing skeptics as well as propagators of more controversial theories to appear on-camera, Chariots of the Gods consists almost entirely of monotonous narration with maybe 90-seconds worth of on-camera "experts." Lacking authoritative voices or even questionable "experts" to state their observations and make their claims, Chariots of the Gods relies solely on images and narration to make its case and, as presented, is utterly lacking in anything approaching credibility.

As the first of its kind, the film is less like the speculative documentaries that followed and more like the mondo-type exploitation documentaries that preceded it. It has the same quick cutting of those movies, jumping from one exotic location to the next, in the manner of the Prosperi-Jacopetti films, and even Peter Thomas's musical score sounds less like his krimi film music than Riz Ortolani's mondo themes. But Chariots of the Gods isn't nearly as entertaining or effective as the best of those pictures are. Reinl's storytelling is too scattershot, and Thomas's music rarely matches the mood of what's onscreen.

The film's only saving grace is its pretty, travelogue-like cinematography, its crisp images capturing places around the world as they existed in 1969 when most of it was shot, places that in some cases look much different today.

VCI's Blu-ray of Chariots of the Gods offers a new 2K scan of the original negative, though the English main titles seem derived from a secondary source, and the quality of the 1.66:1 widescreen image varies widely as stock footage is integrated with footage shot specifically for the film. Not clear from the packaging is that the film is offered only in English, not German, with optional English subtitles. This may be from an international soundtrack prepared in Germany as the narrators, one of whom sounds a bit like actor Robert Vaughn, all have slight accents. The LPCM (mono) audio is adequate. Region-free.

Included as a bonus feature is an entire second film, Mysteries of the Gods (1976), which is more of the same drivel, presented in the same manner. As with the main feature, it utilizes some kind of international English language track, rather than the William Shatner-narrated (!) version originally released in the U.S. The video transfer here is much less pristine, but perfectly watchable for those masochistic enough to want to try.

I was expecting Chariots of the Gods to be highly suspect if not ludicrous yet entertaining, but it fails utterly on that later point. Strictly for suckers, you're not missing out if you choose to Skip It.