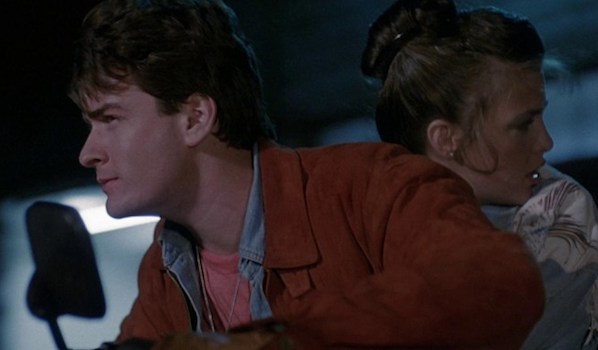 The 1986 flick The Wraith is a supernatural action mishmash whose cult following is one of those I-guess-you-had-to-be-there things. The film is weird, but it's not quite weird enough to be visionary. The film is bad, but it's not quite bad enough to be a laugh riot. The filmmakers and actors are constantly making unexpected choices, but these often just lead to viewer befuddlement. It's prime fodder for something like the How Did This Get Made? podcast, so it's fitting they did an exemplary episode on the film in 2017.

In a nutshell, the film concerns the arrival in a suburban Arizona town of Jake Kesey, a motorcycle-riding teen with unusual scars, played by a checked-out Charlie Sheen. Around the same time, a mysterious racer in a souped-up Dodge Turbo Interceptor shows up in town and begins wordlessly challenging the members of a local gang to street races. The gang members are racing to take his pink slip, and he's racing to take... THEIR LIVES!. No one can see the racer's face, because he wears a helmet and full-body suit that resembles a low-budget cross between Star Wars Storm Trooper gear and the live-action version of The Guyver.

Gee, I wonder if this weird racer and the new kid in town are somehow related?

The Wraith is a revenge story that writer-director Mike Marvin states in the Blu-ray supplements exists on a pop culture continuum between High Plains Drifter and The Crow. If only. Our hero barely makes an impression, largely because he's mostly played by a stand-in in a suit. The evil hot rod gang is more cartoon goofy than comic book menacing (the film never nails a consistent tone anyway). And the revenge mission has no internal logic for viewers to latch onto. At one point, The Wraith enters the bad guys' barn-turned-car-garage and shoots the place up with a shotgun. Uh, why not just shoot the gang then? I mean, the dude isn't Pennywise savoring their fear or something.

The cast is mostly better than the material. Future Notebook director Nick Cassavetes makes an effectively creepy impression as the psychopathic head of the hot rodders, Packard. Packard has an unhealthy obsession with sweet girl-next-door Keri (Sherilyn Fenn), who was the girlfriend of a boy who was... MYSTERIOUSLY KILLED. Hmmmmmm... Randy Quaid plays a shit-kicking police lieutenant who is trying to figure out the motivation for the recent spate of weird vehicular homicides. HMMMMMMM... Meanwhile, Clint Howard stands out from Packard's motley crew -- which includes colorfully scummy dudes with names like Gutterboy and Skank -- as a nerdy gearhead with a Jack Nance hairdo.

By the way: Lionsgate's Blu-ray bears a PG-13 rating, but the disc features the better-known uncut video version with some brief flashes of nudity. There's some online chatter about how the film has always had this nudity and has always been rated PG-13, but my first viewing of The Wraith was of an original 35mm print at a repertory theater a few years ago -- and no nudity. I don't know the history of when this footage was reinstated, but it was a mild surprise to me on this second viewing. 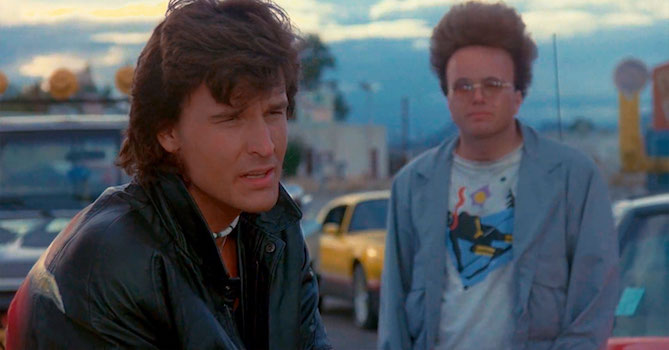 The Blu-ray
The Wraith is spine number 20 in Lionsgate's Vestron Video Collector's Series. It comes with a shiny cardboard slipcover and a code for a digital copy.

The Video:
The AVC-encoded 1080p 1.78:1 presentation is probably not brand-new, but it offers a satisfying amount of detail and depth. Colors are pretty strong, and grain is typically natural-looking.

The Audio:
The DTS-HD MA 2.0 stereo mix is a little quiet, but it's well-designed. Dialogue and effects come through boldly. The music is a mixture of score and surprisingly name-brand rock tunes from the likes of Ozzy Osbourne, Robert Palmer, Billy Idol, and more. Subtitles: English, English SDH, Spanish.

Special Features:
One of the audio commentaries, as well as three of the featurettes, appeared on Lionsgate's 2010 DVD.

Final Thoughts:
I have to admit that Lionsgate, through their revival of the Vestron Video label, have created a nice Blu-ray package for fans of The Wraith. Lotta good supplements, and solid A/V quality. Problem is, I don't find much fun in this silly flick. I expect mileage may vary (haha, like on the road!), but I say just Rent It. 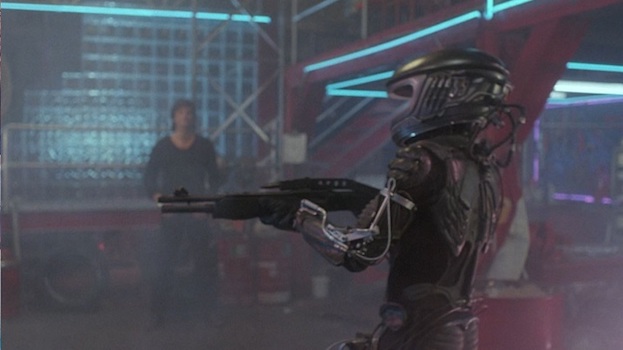