F.P.1 Doesn't Answer (F.P.1 antwortet nicht, 1932) is one of those films long sought by film buffs intrigued by its (albeit sleight) sci-fi premise, and because it features actor Peter Lorre, shortly before the Nazis came to power and he fled for other parts of Europe before eventually landing in Hollywood. 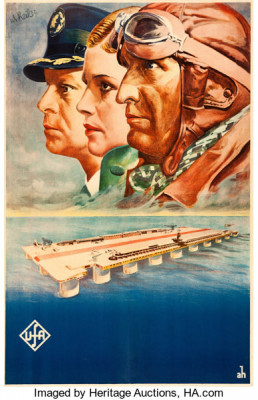 The German version stars Hans Albers as Ellissen, a wealthy pilot obsessed with breaking world speed records. Ellissen stages a phony burglary at the offices of shipbuilders Lennartz-Werke, the ruse intended to spark interest in a permanent "flying platform" in the middle of the Atlantic, allowing for safer transcontinental flights, a project conceived by Ellissen's lifelong friend, architect Droste (Paul Hartmann). Claire (Sybille Scmitz) learns of Ellissen's plans but goes along with it because a) she's attracted to the dashing Ellissen and, b) is part-owner of Lennartz-Werke, and privately endorses the project.

The massive platform, resembling a stationary aircraft carrier, is successfully built, though Droste, overseeing the operation like a ship's captain, is convinced saboteurs have infiltrated the platform, planning to destroy it before the first planes can land there. Meanwhile, Ellissen has abandoned Claire for a foolhardy, around-the-world flight that ends in disaster, souring Ellissen's love of flying and leaving him broke and despondent. Claire, meanwhile, has fallen in love with Droste, and when over the radio she hears gunshots in the radio room, must convince reluctant flyer Ellissen to take her to the platform to save her lover and F.P.1 itself, not sabotaged and sinking.

While not in the same league as Fritz Lang's Metropolis, F.P.1 is quite entertaining and impressively tense in its third act, especially after the crew of the floating platform is gassed using the rig's ceiling-based sprinkler system, eerily if unintentionally reminding postwar viewers of the Nazis' Final Solution. The F.P.1 itself doesn't look all that different from a modern aircraft carrier, but the miniature special effects are very good for their time, supported by enormous, full-size sets of the platform's exteriors and interiors.

Lorre's supporting part is that of Johnny, a plucky photojournalist determined to get a story, but Lorre plays him with a naturalism that hasn't dated as badly as Albers very German, theatrical one, though on those terms he's quite good, too. Sybille Schmitz's heroine is also engaging, she doing the heavy lifting successfully selling the clichéd love triangle. One of German cinema's most tragic actresses, her sad life story was later fictionalized for Fassbinder's Veronika Voss (1982). Co-written by Kurt (later Curt) Siodmak, the curmudgeonly brother of more successful director Robert Siodmak, the film somewhat resembles Ishiro Honda's sci-fi epic Gorath (1962), celebrating flyers (of the rocket type in that film) and the can-do vision of realizing seemingly impossible innovations. It's probably Siodmak's best screenplay, better even than his celebrated The Wolf Man (1941).

Kino Lorber's presentation of the black-and-white, 1.33:1 standard F.P.1 Doesn't Answer is nearly perfect, one of the best-looking early ‘30s titles out on Blu-ray. The alternate English language version looks almost as good. Both the mono audio and English subtitling are well above average for this Region "A" encoded disc.