The Indian Doctor (2010-13) is a thoroughly mild though not unpleasant British-made television dramedy. Some fans of the show liken its fish-out-of-water premise and ensemble of eccentric characters to the more popular and longer-running Doc Martin, but the series isn't much like that program, which has a fascinating, funny central character and appealing supporting ones.

Rather, The Indian Doctor plays like something create by AI technology, generally hitting the requisite buttons, combining elements that worked on past shows with politically-correct storylines yet lacking utterly in originality, depth, and chance-taking. 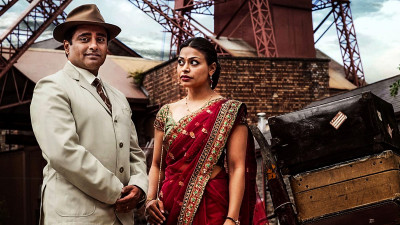 Set during the mid-1960s in the small Welsh mining village of Trefelin, the series opens with the arrival of the new local doctor, Indian immigrant Prem Sharma (Sanjeev Bhaskar) and his wife, Kamini (Ayesha Dharkar). Prem eagerly looks forward to the assignment but Kamini, rather like Eva Gabor on Green Acres, is appalled by the primitive home/surgery and unsophisticated, working poor environment, and for most of the first season aggressively tries to persuade Prem to abandon the village for the lights and glamour of greater London.

Naturally, much of the village is wary of the Sharmas and their exotic appearance, religion, and culture. One of the few interesting touches here is that most assume the Sharmas left behind a life of poverty far worse even than Trefelin, unaware they were quite wealthy and lived in a palatial home with dozens of servants.

Other characters are introduced. Prem's receptionist is Gina (Naomi Everson), a pretty young girl in love with Tom (Alexander), a delivery boy wanting to move to London to pursue his dream of becoming a pop star. Tom lives with his father, bedridden and dying of emphysema from his years down in the mines, and doesn't get along with his step-mother, sweet-natured barmaid Megan Evans (Mali Harries). Union rep Owen Griffiths (Ifan Huw Dafydd) is an alcoholic and chronic gambler and thus not much of a single father for his young boy, Dan (Jacob Oakley), who's always getting into trouble but eventually befriends Kamini. A nearby shop keeper, Sian Davies (Erica Eirian), is nosy and judgmental.

The first season revolves around safety and health violations at the mine recorded in the missing diary of Prem's predecessor, which ruthless English colliery manager Richard Sharpe (Mark Williams) is anxious to find and destroy during his pending promotion to regional manager, especially since his sexually-starved wife, upwardly-mobile Sylvia (Beth Robert) is likewise dying to leave the village and have children with her impotent bully of a husband.

Star Sanjeev Bhaskar is very likable as Prem, but the writing on the series is superficial and predictable. In the first episode a farmer implores Prem to rush over to his remote farm because "Gladys" (or whatever the name was) was in in the pangs of labor. As the farmer and Prem rush to the scene, I thought to myself, "Gladys is going to turn to be either a sheep or a cow" and, sure enough, I was right.

Neither the period setting nor clash of cultures add much to The Indian Doctor, not as comedy, nor as drama. There's a bit of confusion and mild racism toward Prem and his lady wife at the beginning, but it's all on a surface level, with some bemused reactions and disapproving glances, but nothing in the form of strong human emotion. The period setting seems to have been inspired by the successful Inspector George Gently; like that detective series, each new season of The Indian Doctor moves a year forward in time, reflecting changes during that tumultuous decade, but here it's all window dressing.

The Indian Doctor's three season run consists of just five hour-long shows per season, and feels a little cash-strapped. The season one finale, for instance, revolves around a local town festival, yet in the show it occupies a comparatively tiny space occupied by no more than 30 or so extras and cast members.

The program's cast changes suggest more troubled history. Williams and Robert disappear without a trace after season 1, as does Evans. Mark Heap, playing the village's new minister, the Rev. Herbert Todd, introduces new conflict during season 2 but then he's gone before the start of season 3, as is Everson's receptionist.

The most interesting thing about the show's first season is the relationship between Prem and Megan, who after the death of Megan's husband, become close while investigating the problems at the mine. With Prem continually badgered by his wife to leave the village for London, and with the couple unable to talk about the sudden death of their own child back in India, Prem and Megan find solace and purpose helping one another. The first season hints at the possibility they have romantic feelings toward one another, but during season two (from what this reviewer has so far seen) the writers seem to be veering away from this interesting character development, probably concerned it's a dramatic dead-end rather than wanting to avoid interracial romance, though it still plays like a copout.

Kino Lorber's presentation of The Indian Doctor: Complete Series, filmed in 1.78:1 high-definition, is mostly very good, up to contemporary television standards. Curiously, the first episode but none of those that followed is presented with greatly desaturated color. It's not clear if this was a conscious decision to enhance the period look (and maybe reflect the dire working conditions of the coal miners, as if smoke from the mines lingered in the air) or simply a mistake in the mastering process. It's possible the first show was done separately as a pilot (the actors look slightly different in that first episode compared to those that followed) and the desaturated videography was abandoned, but it is rather strange. The DTS-HD Master stereo surround in fine, and optional English subtitles are provided for this Region "A" release, with one disc per five-episode season.

Pleasant enough but predictable and, curiously unambitious, The Indian Doctor is reasonably entertaining as TV comfort food, but not much more. Mildly Recommended.