Notoriously bad, the 1978 film of The Hound of the Baskervilles, directed and co-written by Paul Morrissey with stars Peter Cook and Dudley Moore also co-writing, is a great mess of a movie. Made during a period rife with genre spoofs of the Mel Brooks variety as well as new Sherlock Holmes movies both straight and spoofy, audiences understandably were expecting a more conventional parody of the Arthur Conan Doyle-imagined world of Holmes and Watson, but the movie is more a crazed free-for-all of barely-connected set pieces, comedy closer to the absurdist sketch humor of Cook-Moore shows and specials like Not Only...But Also (1964-1970).

The film is actually a bit better than its reputation and, fitfully, quite funny here and there, but mostly it's an incredible waste of great talent, supporting players drawn from nearly every facet of 20th century British humor, from music halls to ‘70s television. Watching all this disparate comic talent - Terry-Thomas, Kenneth Williams, Prunella Scales, Max Wall, Spike Milligan, etc. - sometimes succeeding at being funny but mostly flailing about is fascinating like a car wreck but also sad at times and even quite embarrassing.

Late in the film there is a special effects-filled sequence superfluously, incongruously spoofing The Exorcist with Joan Greenwood vomiting puke a la Linda Blair. To see this great actress of British comedy greats like Kind Hearts and Coronets and The Man in the White Suit degrade herself for the cheapest of cheap laughs is depressing, not funny. One can't help but feel sorry for her. Aptly, the final shot of the film is of Dudley Moore being pelted with rotting vegetables. 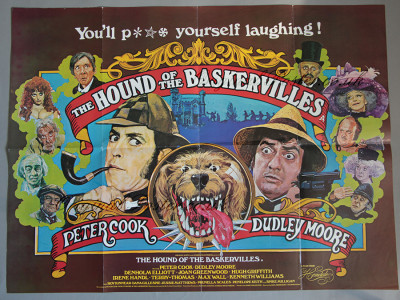 Despite its myriad digressions the film manages to follow the story's basic plot. Sherlock Holmes (Cook) and Dr. Watson (Moore) are visited by a Dr. Mortimer (Terry-Thomas), asking them to investigate the strange, supernatural accounts of a demonic hound stalking the moors and mire near the Baskerville estate, where heir Sir Henry Baskerville (Kenneth Williams) is to assume ownership.

Great talent is everywhere, little of it used well. Prunella Scales (Fawlty Towers), Penelope Keith (The Good Life, To the Manor Born) and others turn up in minor, forgettable parts. Spike Milligan has a funny cameo as a policeman, but others like Kinnear and Griffith are wasted playing absurdly broad caricatures far removed from their usual areas of comic excellence.

Griffith's performance in undeniably animated, alarmingly so, but he looks ill and would die (essentially from alcoholism) soon after. Worse is poor Terry-Thomas, seven years after being diagnosed with Parkinson's disease, his left-hand tremors visibly, his face unusually placid, and his voice weak. That he comes off as well as he does is admirable and perhaps even courageous, yet the film is so terrible it all seems for naught.

Morrissey, Cook, and Moore appear utterly disinterested in the literary Holmes and Watson, or those characters as depicted in earlier movies. Moore affects a high-pitched screech throughout, with a vaguely Scottish accent, playing Watson as merely stupid and incompetent while Cook's Holmes bears no resemblance to the consulting detective of the stories at all. Instead, they preoccupy the film with unrelated, tangential, original characters for sketch-type humor, such as Holmes' phony medium mother (also played by Moore).

One scene exemplifying this particularly involves Moore playing yet another character, Mr. Spiggot, a one-legged man applying for a job as a "runner" for Holmes. Were this sequence extracted from the film and dropped into one of their sketch shows it might have worked. The routine is quite funny (and, certainly, it plays like it was something they might have already done before in some form), but it has nothing whatsoever to do with Hound of the Baskervilles, Holmes & Watson or anything else.

The movie gets worse and worse as it goes: Stapleton's dogs copiously urinating all over Watson, the appalling Exorcist scene coming late in the film, the climax with most of the cast trapped waist-deep in quagmire, a symbolic comeuppance for this sorry enterprise.

A Code Red release via Kino Lorber, The Hound of the Baskervilles uses an older but perfectly acceptable master provided by MGM. Filmed in 2.35:1 Technovision, the image is slightly grainy and soft at once but generally sharp with decent color. The DTS-HD Master Audio 2.0 mono is likewise acceptable, and optional English subtitles are provided for this Region "A" encoded disc.

The lone supplement is a British trailer for the film, along with trailers for other Code Red titles.

For British comedy fans, this Hound of the Baskervilles makes for fascinating if dispiriting viewing, seeing so many varied talents thrown together for such a badly conceived venture. It's actually pretty funny here and there, but a general dreadfulness dominates. Rent It.