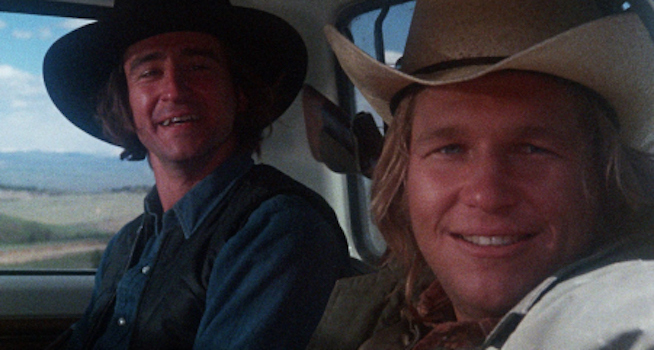 From writer Thomas McGuane (The Missouri Breaks) and director Frank Perry (Doc) comes the 1975 comedy Rancho Deluxe. It's a loosely plotted character study, set fittingly close to the Crazy Mountains in Montana, outfitted with elements of a heist flick, and top-lined by a delightful ensemble cast.

Jeff Bridges and Sam Waterston star as Jack and Cecil, two irreverent young dudes who have seemingly stumbled into penny-ante cattle rustling almost as a way to keep from getting bored. The target of their rustling is John Brown (Clifton James), a beauty parlor magnate from New York state who has fashioned himself into a Montana cattle baron. (It's almost an echo of James's career, since he was a New York actor who became best known for playing down-home sheriffs in flicks like Live and Let Die and Superman II.)

Brown's bored younger wife Cora (Elizabeth Ashley) seems to welcome the disturbance the rustlers bring to their life, but the old man hates it and becomes determined to sniff out the culprits. He hires stock detective Henry Beige (Slim Pickens), who is so clearly infirm that Jack and Cecil should be little concerned. Meanwhile, Brown's two ranch hands Curt and Burt, played by the dream team of Harry Dean Stanton and Richard Bright, fumble over each other in the hopes of catching the eye of detective Beige's sweet-as-pie niece and nurse Laura (Charlene Dallas).

The film is full of wonderful, carefully realized moments. Character actor supreme Joe Spinell gets a touching sequence as Cecil's Native American dad, who clearly loves his son but fervently lectures him about the pitfalls of creature comforts like new boats and pickup trucks. Bridges and Stanton share a note-perfect scene, where Stanton's character Curt quietly reveals he knows the truth about who's doing the cattle rustling, all played in the reflection off the screen of a Pong arcade game. Later, Jack and Cecil score with two sisters, Betty and Mary Fargo (Patti D'Arbanville and Maggie Wellman), which leads to a comically awkward stand-off with the gals' perturbed papa -- and their whole extended family.

The back half of the film mostly concerns the planning of a large-scale caper that will be the final "eff you" to John Brown. Even as McGuane's script dutifully sets up each character to play their part in the final act, the film consistently seems much more interested in the people and the malaise-soaked atmosphere than in the machinations of a crime story. This is a decidedly '70s film, and all of its shaggy trappings are what make it such a treat. The fact that McGuane's old drinking buddy Jimmy Buffett provides the film's song score, along with some on-camera country-rockin' in a cowboy bar, is the perfect encapsulation of the film's proto-slacker ethos.

They don't make 'em like this anymore, but Rancho Deluxe mostly makes you glad they once did. 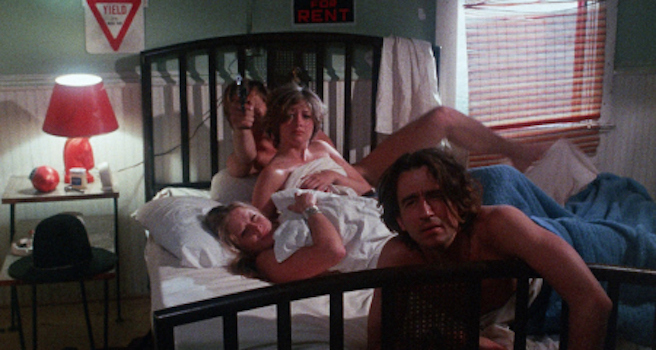 The Blu-ray
Rancho Deluxe comes with reversible cover art and a booklet featuring color photos and an essay by Gavin Smith. Like all Fun City Editions titles so far, the initial run is offered with a limited edition slipcover on the Vinegar Syndrome site.

The Video:
Sourced from a new 2K restoration of a 35mm interpositive, this AVC-encoded 1080p 1.85:1 presentation is another gorgeous upgrade from the folks at Fun City. The clarity and grain of the original image -- shot by the legendary William A. Fraker -- is nicely translated here. Colors are richly saturated without looking unnaturally or inappropriately vivid. Some great images of the Montana landscape, as well as plenty cozy, kitschy '70s interiors.

Final Thoughts:
The gleaming new transfer for this low-key '70s charmer might be reason enough to recommend it, but the generous supplements seal the deal. Fun City Editions prove once again that they love the movies they release, and we cinephiles get to reap the benefits. Highly Recommended. 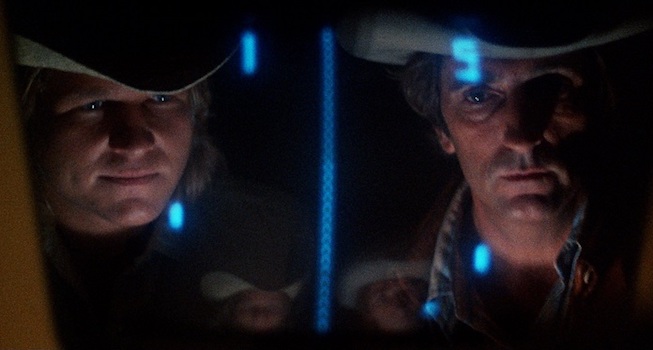