The Incredible Shrinking Man (1957) is an anomaly among ‘50s-type sci-fi pictures, let alone the steady stream of such pictures Universal-International had been producing, 2-3 per year, since 1953. Through a strange series of circumstances, it transcends the usual science fiction film of its period, unique as it is in many ways, and it still impresses.

The vast majority of U-I's sci-fi output had been overseen by actor-turned-producer William Alland, including It Came from Outer Space (1953), Creature from the Black Lagoon (1954), and Tarantula (1955), but The Incredible Shrinking Man was the product of Albert Zugsmith, possibly the sleaziest, most tasteless producer ever entrusted with big-studio features. By the ‘60s he found his métier directing semi-pornographic exploitation like Psychedelic Sexualis and Movie Star, American Style or; LSD, I Hate You (both 1966) but, even in his studio films, Zugsmith was drawn to disreputable subject matter -- even when by some miracle a good movie resulted.

That included Douglas Sirk's Written on the Wind (1956), a movie about a playboy driven to alcoholism by a low-sperm count; and Orson Welles's Touch of Evil (1958) a noir rife with murder, corruption, drug use, etc. No doubt Zugsmith was drawn to fantasist Richard Matheson's novel The Shrinking Man for similar reasons. As its protagonist, Scott Carey, inexplicably begins shrinking, Matheson's novel dealt with its hero struggling with parallel diminished masculinity, unable to sexually satisfy his wife. As he gets smaller and smaller, he's even accosted by a child molester.

The movie, of course, could only vaguely hint at some of these issues, but hint it does. Though U-I undoubtedly viewed the project as just another sci-fi programmer on its treadmill, from its unique jazzy title cue (including a trumpet solo that progressively gets higher as the silhouetted figure of Carey shrinks) to its unprecedented existential ending, arguably even more enigmatic than the end of Kubrick's 2001, The Incredible Shrinking Man is certainly different. 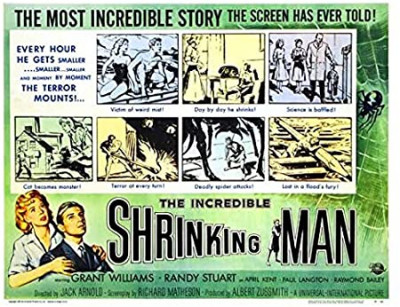 Scott Carey (Grant Williams) is on a boating vacation with his wife, Louise (Randy Stuart), when a strange mist overtakes him while Louise is below deck. Months later, he's losing weight and height, a medical impossibility. Exhaustive tests confirm his worst fears: Scott Carey is indeed shrinking. Soon he's the size of a child, unable to work, and tyrannical toward the equally distraught but faithful Louise. An antidote is found, and for a while Carey struggles with coming to terms with his childlike body and the constant media attention but finds some comfort after befriending a circus dwarf, Clarice (April Kent). (The film vaguely hints at an affair.)

But then Carey begins shrinking again, and soon is but inches tall, small enough to live in a dollhouse. Attacked by the family cat, Carey falls into the family basement and, presumed dead, must fend for himself in its hostile, almost alien environment, complete with a monster spider guarding the only food source, a stale, half-eaten piece of cake.

The simplicity of Shrinking Man's narrative is part of its appeal. Grant Williams and Randy Stuart have the only substantial roles, with Kent's dwarf and Paul Langton's brother-in-law in much smaller supporting roles. Matheson, who also wrote the screenplay, wanted to retain the novel's flashback structure, but he was overruled and an uncredited Richard Alan Simmons was brought in to make the story straightforwardly linear, a change Matheson objected to for decades before grudgingly admitting that Simmons actually improved the script in some respects. Regardless, the movie is about a man who shrinks, and in telling the movie audience almost nothing about Scott or Louise other than they deeply love one another, Carey becomes an "everyman" that audiences identify with in this resolutely uncluttered story.

Universal's ‘50s sci-fi films starred actors eventually closely associated with the genre: Richard Carlson, Richard Denning, John Agar. Zugsmith and/or Arnold had wanted actor Dan O'Herlihy, no doubt because O'Herlihy had been nominated for an Oscar playing a similarly isolated character in Robinson Crusoe. When O'Herlihy turned the part down, Universal contract player Grant Williams, also in the Zugsmith-produced Written on the Wind, was cast.

Williams brings an odd, partly accidental effectiveness to the role, because he was pretty much an enigma himself. Like Universal stars Rock Hudson and George Nader, Williams was gay but apparently far deeper in the closet than either Hudson or Nader. Williams was delicately handsome but with a strange agelessness and, in 1957, a boyish quality. Yet by 1983, when after years away from the spotlight Williams appeared briefly on the game show Family Feud, in a reunion with his Hawaiian Eye TV co-stars, 51-year-old Williams had appeared alarmingly aged, 20 years older than he actually was. He died two years later. Further adding to the strange chemistry inadvertently helping the tone of the film was that Randy Stuart, playing his wife, was almost seven years older than Williams. Once he starts shrinking, she looks as much like his mother as his wife.

The threats to Carey's masculinity as he literally experiences "shrinkage" could only be vaguely hinted at due to the Production Code, but it manifests in Carey's growing tyranny toward Louise. Late in the film is an expressive, wordless scene where Carey scares off a little bird, by this point far bigger than he is, an assertion of power, however dwindling it might be.

Matheson's most famous stories are full of paranoia and fear of loss of control, that everyone is against us (I Am Legend) or that we are utterly insignificant (as here), a meaningless grain of sand against the limitless universe. On one hand Shrinking Man is a story of survival, trying to stay alive against increasingly impossible odds, but it's really more about finding meaning and validation in basic existence, in this case in an environment in which Carey is literally stripped of everything that would seem to define him as a person.

On a technical level, the special effects are impressive by 1957. U-I at the time favored optical effects over practical miniatures, so there are endless composite shots coupled with increasingly oversized sets and props.

Licensed from Universal, Criterion's The Incredible Shrinking Man looks very good with a few caveats. Their notes indicate the original camera negative was sourced, but in every home video release I've seen, including an earlier Blu-ray release by another label, many early scenes, much of the first-third of the film (mostly during Carey's medical exams and rising tension at home) are unusually grainy, straight cuts with no apparently process work. I have no explanation for this. Maybe parts of the original negative wore out from over-printing, or maybe Universal deliberately printed these scenes that way in an attempt to even out the look with the many later composite effects shots. In any case, a big chunk of the film looks bad relative to other late-‘50s 1.85:1 black-and-white studio films. (By way of comparison, take a look at the Film Detective's new Frankenstein's Daughter, made one year later. It's a far, far worse movie made on a puny budget yet, appearance-wise, it's light-years ahead of The Incredible Shrinking Man. The strong mono audio was remastered from the original 35mm magnetic track. Optional English subtitles are provided for this Region "A" encoded disc.

Supplements abound, beginning with Tom Weaver's aforementioned audio commentary track, assisted by movie music authority David Schecter. One of the very best in a crowded field, Weaver strikes the perfect balance of history, context, trivia, and personal insight, and like almost no one else does so with very humorous observations about the film. Another great extra is a conversation with filmmaker Joe Dante and writer-comedian Dana Gould. I had recently rewatched Dante's insightful comments on Roger Corman's similarly ambitious X (1963) and he has equally fascinating and informed things to say about this, while Gould is no slouch, he making excellent comparisons between the novel and the film. (I particularly liked -- and agree with -- Dante's comments about how each studio's "house style" is generally far easier to recognize than those of journeymen directors.)

Also included is a featurette with Craig Barton and Ben Burtt about the film's special effects; Auteur on the Campus: Jack Arnold at Universal (Director's Cut); a 2016 interview with Matheson's novelist son, Richard Christian Matheson; a 1983 interview with Arnold; a Universal-8 condensed version of the film; a great feature on unused and shortened musical cues; a trailer featuring narration by Orson Welles, and finally an essay by critic Geoffrey O'Brien.

Not long before his death, Bill Warren, author of the seminal Keep Watching the Skies!, the definitive study of ‘50s-type sci-fi films, bemoaned the lack of a deluxe home video version of The Incredible Shrinking Man. Too late for Bill but not the rest of us, that oversight has been rectified. A DVD Talk Collectors Series title.

*Annoyingly, Weaver is billed as a "genre historian" rather than, say, "cinema historian," demonstrating that, even now, science fiction cinema is somehow less reputable field of study. I mean, after all, aren't experts on film noir, movie musicals, Westerns, slapstick comedies, etc. all "genre historians?" Why do they get a pass?