A disappointing waste of talent, including director Robert Aldrich, writer Dalton Trumbo, and actors Rock Hudson, Kirk Douglas, Dorothy Malone, Joseph Cotten, and Carol Lynley, The Last Sunset is justly forgotten. Made by Douglas's company for Universal in the wake of Spartacus (1960), likewise written by Trumbo, this has the air of an ambitious, A-list Western that began unraveling at the planning stages, and that by the time filming was underway the key creative people involved just wanted to get it done and move on to something else.

Aldrich, a sloppy director even on many of his good films, exhibits little imagination. As producer-star, Douglas liked hiring hungry directors he could control; he and Aldrich didn't get along, apparently. Trumbo, like Aldrich, was preoccupied with other pending projects, and his lack of focus on The Last Sunset also contributes to its failings. 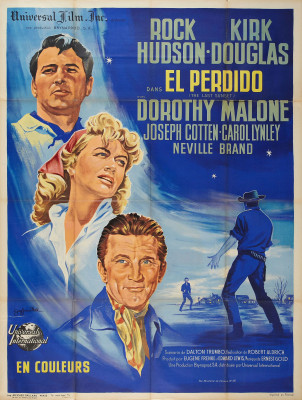 Wanted for murder, Brendan O'Malley (Douglas, not exactly Irish) flees across the Texas border into Mexico, with lawman Dana Stribling (Hudson) hot on his tail. O'Malley arrives at the plateau cattle ranch of his long-ago former lover, Belle (Malone), she now married to a much older, ex-Confederate officer from Virginia, John Breckenridge (Cotten), with a 16-year daughter, Melissa (Lynley). Ranch foreman Milton Wing (Regis Toomey) minds things while Breckenridge is away, along with a gaggle of Mexican hands.

O'Malley clearly wants to rekindle his romance with Belle, but his unpredictable propensity for violence frightens her. (In one scene for no good reason he nearly strangles the family dog.) When Stribling shows up, O'Malley knows his arrest warrant isn't legally binding in Mexico. Breckenridge needs hands to drive his herd across the Texas border; unbelievably, both agree to be hired on, delaying their inevitable showdown until the end of the cattle drive (and the last minutes of the film).

Attempts to liven up the cattle drive with a trio of bad guys (Jack Elam, Neville Brand, and Rad Fulton) goes nowhere, and when Breckenridge is killed off early in the story, O'Malley and Stribling vie for Belle's affections, while Melissa, for her part is infatuated with O'Malley. When she ditches her tomboy look for more "womanly" attire, including a yellow dress once worn by Belle, O'Malley sets his sights on Melissa, a dead ringer for Belle when she was her age, though he doesn't seem aware of this.

While The Last Sunset has the sheen of a big-budget Western, Aldrich's direction is mighty sloppy at times. Quite sluggish at 112 minutes, it still plays like scenes that might have explained character motivations better may have been trimmed. Toomey's ranch foreman character suffers particularly. Why isn't he leading the cattle drive instead of Stribling, a lawman with little experience as a cowhand, aided by O'Malley, identified by Stribling as an outlaw and a murderer to Breckenridge? Why is Toomey's voice dubbed by another actor? The cattle drive itself is notably lifeless; Red River it ain't. The production acquired an impressive number of cattle, but they seem far too many in number for the dozen or so leading it.

Worse, spatial relationships and continuity go out the window, and during several action scenes it's unclear what's happening to whom where. A prime example is the inevitable climatic showdown between Douglas and Hudson. Just before that is a scene between Douglas and Lynley, the camera showing the movie audience that the sun is just about to set, while Douglas tells her he'll return as soon as drifts beyond the horizon. Nevertheless, moments later, the big gunfight between Douglas and Hudson looks like it was shot at high noon. It's sunny and bright, with shadows of the actors falling barely to the tips of their toes. (Aldrich's editing of the gunfight is genuinely terrible, too, cut together as if by a film student who'd never seen a Western.)

When O'Malley redirects his attentions toward Melissa, Belle appears worried but does nothing, quite inexplicable given the nature of the story's predictable plot twist. Nor does O'Malley seem overly concerned that in driving Breckenridge's cattle to Texas he's merely forestalling a showdown with Stribling and arrest/hanging even if he were to survive.

The plot twist (I won't reveal here), presumably in Howard Rigsby's original novel, Sundown at Crazy House, was likely the impetus for the film, and probably the reason director Sergio Leone reportedly admired this otherwise drab picture, he far more successfully integrating dark secrets into Once Upon a Time in the West. One imagines 1961 family audiences gobsmacked by Sundown's big revelation, but the handling of it, both by Trumbo and Aldrich, is extraordinarily clumsy and awkward.

The film has some good points. I don't recall Malone playing the mother of a teenager before this, she having started out playing teenagers and very young adults herself at the beginning of her long career. At 36 she was beginning to show her middle age but also a growing maturity in her acting. Lynley is well cast as the daughter, resembling Malone enough to be believable, and subtly maturing outwardly over the course of the story while still carrying the childlike innocence of inexperience.

Though Hudson is top-billed it's Douglas, clearly, that's the main character. Hudson is workmanlike but unmemorable due to the poor writing rather than his acting. (Hudson was very underrated as an actor generally. By the 1960s he was capable of excellent work.) Douglas has a couple of good scenes scattered about intermittently: one good moment has O'Malley gently showing Melissa how to care for an orphaned calf.

Licensed from Universal, Kino's The Last Sunset sports a new 2K restoration of the 1.85:1 widescreen color film. Opticals such as dissolves are more than a little grainy, but straight cuts generally look good, especially close-ups, and the color is accurate. The DTS-HD Master Audio 2.0 mono is likewise fine, and optional English subtitles are provided for this Region "A" encoded disc.

Other than a trailer, the main extra feature is an audio commentary by critic Nick Pinkerton.

Overlong, dramatically murky and haphazardly directed, The Last Sunset is a big disappointment. Not terrible, but far from good. Rent It.