You'd be hard pressed to find a film comedy funnier than W.C. Fields' The Bank Dick (1940), the third of four starring features he made at Universal. After a long career as a headliner in Vaudeville and on Broadway, venues in which he was one of its highest-paid stars, Fields finally became a major film star in the 1930s following several silent era attempts, first in two-reel comedies for Mack Sennett, short subjects distributed by Paramount Pictures, then as a kind of guest star in several Paramount features (International House, Six of a Kind, etc.) before graduating to starring vehicles of his own. Fields's inexpensive, hilarious comedies were quite popular, but in the mid-‘30s he became gravely ill for more than a year and nearly died.

He never fully recovered, but eventually he became an even greater sensation on radio as arch-nemesis to ventriloquist dummy Charlie McCarthy on The Chase and Sanborn Hour, the medium's top-rated show. This led to new film work at Universal, the first of which, You Can't Cheat an Honest Man (1939), bringing the Fields-McCarthy feud to the big screen. Both it and The Bank Dick were big hits, though Fields's next two pictures, My Little Chickadee (1940), which teamed him for the first and last time with Mae West, and the gleefully anarchic Never Give a Sucker an Even Break (1941), Fields's last starring film, were much less successful. After that, the increasingly frail comedian made only guest appearances in movies until shortly before his death at the age of 66, on Christmas Day in 1946.

Of the Universal titles, fans and scholars are pretty much in agreement that My Little Chickadee is the weakest of the four, despite many fine moments, and that The Bank Dick, the only film in which Fields more or less had complete creative control and unburdened by co-leads (Edgar Bergen/Charlie McCarthy, West, and Gloria Jean in You Can't Cheat, Chickadee, Sucker, respectively) is the best, though all have many hilarious set pieces and minute but side-splitting bits of business.

Uniquely funny, Fields had not one but two distinct personae, though with some overlap: playing a third-rate grifter, as in You Can't Cheat an Honest Man; and as a henpecked family man, trying to make good in a hostile home environment, usually in a small, working-class town populated by unpleasant, gossipy and judgmental types when they're not self-centered nitwits. In both characterizations the Fields character often has an adult, marriageable-age daughter who adores him despite his flaws, she being the only person who truly understands him.

The Bank Dick falls into this latter category, though this time Fields must contend with, by far, the nastiest, most unpleasant (even rock-throwing) family he ever faced. And this time even his daughter is a birdbrain. 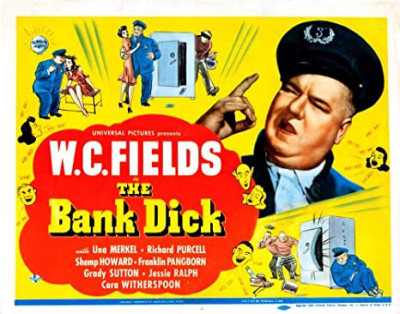 However, what plot there is digresses far afield in its first act. A Hollywood crew is in town shooting a film and when its director, A. Pismo Clam (Jack Norton), arrives at the set dead drunk, desperate producer Mackley Q. Greene (Dick Purcell) enlists Sousé to replace Clam. Greene being inspired by Sousé's tall tales of having directed the likes of Chaplin and Keaton during the silent days.

Back to the story. During a lunch break the bank is held up, and it appears that Sousé has captured one of the robbers though, in fact, they merely collided. Nevertheless, the grateful bank president (Pierre Watkin) offers Sousé a job as an armed guard, a "bank dick." (He does, however, garnish Sousé's wages to cover past-due mortgage payments, so that gratitude is rather limited.) Soon after, however, con man J. Frothingham Waterbury (Russell Hicks) sells Sousé a scheme that leads to Sousé convincing Og to steal an advance from the bank to invest $500 in a worthless "beefsteak mine" -- just, as it turns out, when bank examiner J. Pinkerton Snoopington (Franklin Pangborn) arrives to audit the books.

Though helmed by comedy veteran Edward F. Cline, a longtime collaborator*, that Fields is the true auteur of The Bank Dick is obvious. Bits of business and snippets of dialogue from earlier films and even earlier stage appearances are recycled, the script is disjointed (to say the least) and, typical of Fields the script (credited to his frequent nom de plume, "Mahatma Kane Jeeves") is rife with outrageously absurd character names. And the big laughs come every 20 or 30 seconds.

Fields made one big concession that paid off in spades, in allowing a madcap, Keystone Kops-like car chase finale, with the star never on location for any of that filming, Fields limited to making humorous quips while seated in front of process screen. But the big chase at the end, no matter it really reflects none of Fields's comedy style, was a huge hit with audiences, so much so that Universal began sticking similar slapstick chase finales into most of their comedies, whether there was a good reason or not for them being there. Rare, for instance, is a Universal-produced Abbott & Costello film without one.

But what really sticks in the memory is the endlessly quotable, hilarious dialogue and some of the visual gags. Of the latter type, one huge laugh occurs after Sousé gets Snoopington dead drunk, to stall for time, and from a hotel lobby we see Sousé escort the bombed bank examiner upstairs to his room. Moments later Fields rushes back downstairs, through the lobby and out the door, moments later returning with Snoopington, who fell to the sidewalk from his window.

Key to the hilarity of the dialogue is the delivery, and not just by Fields. When Sousé's youngest daughter suggests throwing a rock at her father, she's admonished by her mother. What makes the line work is the way it's read, two sentences combined into a single, unbroken one: "Respect your father, darling What kind of rock?"

As with most Universal ‘40s titles on Blu-ray, The Bank Dick looks nearly flawless, the black-and-white, standard frame image showing nary a sign of age-related wears. The DTS-HD Master Audio mono is also excellent, and supported by optional English subtitles on this Region "A" encoded disc.

A trailer is included, but the real prize here is an outstanding audio commentary track by filmmaker/historian Michael Schlesinger, who knows films like The Bank Dick upside-down and sideways. In a pleasingly conversational and sometimes quite humorous style he provides scads of interesting information while observantly putting the film and Fields into context. It's a terrific track, one of the year's best.

Of his generation of screen clowns, Fields, born in 1880, was among the oldest, yet his best films play just as hilarious today as they did when they were new. A bona fide comedy classic, this is a DVD Talk Collectors Series title.

*I'm guessing it was Cline, rather than Fields, who conceived one of the big laughs: Og sheepish staring at J. Pinkerton Snoopington from behind a bank vault door, a bit similar to one Laurel & Hardy did in Towed in a Hole.