That Counterpoint (1968) has fallen into almost total obscurity is puzzling. It was made during the most productive period of star Charlton Heston's career, a time when he headlined such big films as Major Dundee, The War Lord (both 1965), Khartoum (1966), Will Penny and Planet of the Apes (both 1968). Yet Counterpoint was, for years, difficult to see; some years back I resorted to a Spanish DVD that panned-and-scanned its original Techniscope compositions.

Very loosely based on the novel The General by writer Alan Sillitoe (Saturday Night and Sunday Morning, The Loneliness of the Long Distance Runner), the screenplay for Counterpoint is muddled and director Ralph Nelson was removed from the project during editing, which probably accounts for some of its problems, including an obviously-deleted subplot. However, the movie operates from an intriguing if unlikely premise, generates suspense, and has a couple of outstanding moments. 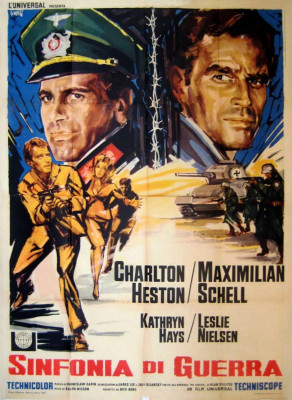 The story takes place in Belgium in late 1944, after the Allied invasion of the European continent, but with victory against Nazi Germany still six months away. Behind Allied lines, internationally famous classical conductor Lionel Evans (Heston) leads a symphony orchestra on a USO tour. (Amusingly, the soldiers would rather be entertained by Bob Hope or Betty Grable.) A German offensive interrupts one of their concerts, and as the Allies fall back, in the confusion the big bus carrying the symphony orchestra is captured by the Germans, the lot taken to a castle where Col. Arndt (Anton Diffring) is chomping at the bit to execute the entire orchestra.

Fortunately, the commanding officer there, General Schiller (Maximilian Schell), is a classical music lover and amateur musician himself intimately acquainted with Evans's reputation. Schiller orders a command performance but Evans refuses, apparently on the grounds that, as civilians, they are not technically prisoners but detainees. Should he acquiesce to Schiller's demands, Evans would be acknowledging their alleged status as prisoners of war, expediting the Germans' desire to have the entire orchestra murdered. (This aspect of the story is badly told; instead, Evans comes off simply as a stubborn, self-centered jerk.)

The orchestra is moved into a church within the castle, the musicians well aware they might be shot at any minute. Complicating matters is that two G.I.s, Lt. Long (Linden Chiles) and Sgt. Calloway (Peter Masterson), slipped onto the bus unnoticed, forcing Evans to masquerade them as players within the orchestra. Evans's adamant refusal to play for Schiller adds tension, with cellist Annabelle (Kathryn Hays), Evans's former lover, and concert master/first violinist Victor Rice (Leslie Nielsen), now married to Annabelle, left to convince Evans to change his mind.

One gets the sense that Counterpoint's writers, James Lee and Joel Oliansky, apparently working on different drafts, grappled with but never quite figured out how to flesh out the story's main characters. No actor did hardened cynicism better than Heston, but his classical conductor is so stubborn, conceited and autocratic that he borders on comic. "A symphony orchestra is not a democracy!" he bellows. "What's Victor conducting with, a baseball bat?" he growls in another scene. And when one terrified musician blurts out, "I don't want to die!" Evans, with no trace of empathy, asks, "Who does?" Most of Evans's actions eventually seem not motivated out of vanity-driven stubbornness but rather calculated efforts to stall for time, to protect his fellow musicians but, for most of the film, he comes off as extraordinarily uncaring and selfish.

Schell's general is poorly defined. With Anton Diffring's colonel sadistically eager to execute everyone, Schiller is under pressure to authorize the deed, but throughout the film appears personally ambivalent about their fate. The screenplay kinda hints that Schiller, an amateur musician himself with limited ability, enjoys taunting Evans, whom he simultaneously admires, but the character is murky throughout. Further, his dialogue is mostly terrible ("Give me a place to stand and I will move the earth!"), though Schell's sincere performance helps some.

Muddying the waters yet more is the pointless romantic triangle among Evans, Annabelle, and Victor, one that briefly evolves into a rectangle for a pointless scene where Schiller tries seducing Annabelle over dinner. That said, Heston, Schell, Hays, and Nielsen all give fine performances. In Heston's essential The Actor's Life: Journals 1956-1976 he mainly writes about the difficulties in learning to authentically mimic a conductor's gestures, which he does most impressively in the film, but Nielsen on the violin and Hays on the cello particularly play believably also. In filming the scenes of the orchestra, Nelson seems to have integrated actors like Cyril Delevanti and Parley Baer with real musicians (a few of whom wear 1960s eyeglasses, have contemporary hairstyles, etc.) but the overall effect is entirely believable.

Counterpoint was shot in late 1966 and into January 1967, but wasn't released until March 1968, by which point Heston had already completed Will Penny and Planet of the Apes, movies made after Counterpoint; all three were released almost simultaneously, much to Heston's annoyance. Evidence of the troubled production presents itself here and there, notably the apparent elimination of an entire subplot. During the climax, orchestra member Dorothy (Neva Patterson) refers to some kind of sexual encounter with Col. Arndt, a sacrifice she made in hopes he would spare her life, an episode never once even hinted at earlier in the picture.

For all its problems the basic fish-out-of-water war movie operates from an interesting premise and, at times, hints at the superior film it might have been. The best scene in the picture, for instance, has Arndt suspicious of Lt. Long, he masquerading as a trombonist in the orchestra during rehearsal. Hoping to expose him, Arndt stops the rehearsal cold, ordering non-musical Long to demonstrate his musical skills solo. Evans, predictably grouchy, barks at Arndt about interrupting his work, and other members of the orchestra loudly protest Arndt's demands on union grounds, to no avail. Finally, Long is forced to play the trombone, and what happens next is a really terrific moment, not entirely a surprise as it makes use of information carefully established in an earlier scene. Counterpoint could have used more scenes like this one.

Overall, the film does a good job generating and maintaining suspense. Overeager Arndt has a mass grave dug in the castle's courtyard, it looming ominously throughout much of the story, and efforts by the prisoners to escape are tense and reasonably exciting.

Both this and Heston's other Universal production from the period, The War Lord were undernourished, budget-wise, filmed on Universal's backlot rather than European locations. The sets, supplemented by Albert Whitlock matte paintings, almost convince, but the winter setting necessitated fake snow, which here alternates between detergent flakes and soapy foam, distracting in its obviousness.

Universal favored 2-perf Techniscope for many of its productions during the late-1960s/early-‘70s, but despite an increased graininess, Scorpion's (via Kino) Blu-ray of Counterpoint looks quite good, the image impressively sharp with good color throughout. The DTS-HD Master Audio mono is also excellent, and supported by optional English subtitles on this Region "A" encoded disc.

Supplements are limited to a trailer and a good audio commentary track by historians Steve Mitchell and Steven Jay Rubin, a track that integrates as significant amount of military history with the cinema background material.

Not great but definitely worth seeing for its unusual story, occasionally well-told, Counterpoint is Recommended.