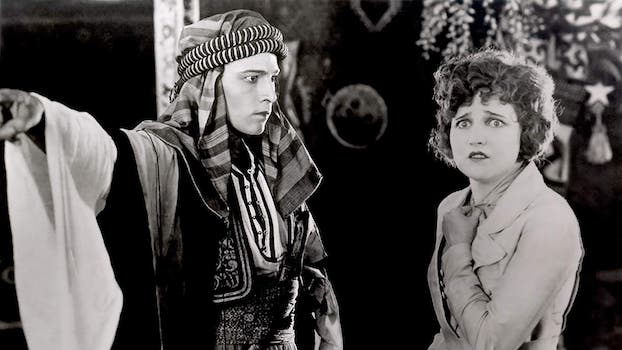 NOTE: The promo stills presented here do not represent the quality of the Blu-ray under review.

It's the one hundredth anniversary of the silent romance The Sheik, which made Rudolph Valentino an iconic heartthrob. (His legend only grew after his premature death five years later.) Although Kino released an edition of this film on Blu-ray a few years back, Paramount has staked a claim on the film's heritage by including it in their Paramount Presents line. It's easily the oldest release in the series.

Seen with modern eyes, The Sheik is a strange time capsule, fascinating for its production values and its conservative moral values. Based on a best-selling novel by E.M. Hull, the film is, by most accounts, a fairly run-of-the-mill romance for its time. A strong-willed English woman played by Agnes Ayres is kidnapped by a handsome Sheik (Valentino) in North Africa and kept captive. He is determined to make her obey him, and she hates him. However, we are supposed to assume that secretly she welcomes the Sheik's hyper-masculinity, and actually he's not such a bad guy. Inevitably, the viewer expects Stockholm Syndrome to kick in so they will fall in love.

Even without the rape scene which was apparently a feature of the original novel, the film's central dynamic is not exactly "romantic." It's queasy at best. Without mincing words, The Sheik is racist and misogynist. The film condescends about the "uncivilized" and "savage" ways of the Arab characters and spends much of its runtime threatening that a mean brown man will violently sully a white woman sexually. Initially it's the Sheik; later it's a bearded bandit played by Walter Long. Then there's the cherry on top. Rather than condone a white woman falling in love with an Arab man, the film cops out at the end and reveals that the Sheik is an orphaned European who was merely raised as an Arab.

Hollywood hasn't strayed so far from this kind of storytelling. In fact, I got a whiff of the initial scenes between Daenerys and Khal Drogo from the combative dynamic here. That is part of what makes The Sheik fascinating to watch: the ways in which it shows how our narratives have changed and how much fundamentally has stayed the same. For better and worse.

I think this is the way that new viewers are going to have to approach the film. It will have to be largely from the angle of historical curiosity. Don't get me wrong. Many silent films would be conventionally entertaining to a modern viewer, but The Sheik is a little too thin and out-of-sync with modern rhythms to achieve that. Even Valentino's performance -- which is admittedly striking -- feels too presentational and broad to connect on a meaningful or emotional level.

On the other hand, Adolphe Menjou (whose career would continue for another four decades) makes a relatively grounded and quite memorable supporting appearance as a French novelist who visits the Sheik and counsels him about his treatment of Agnes Ayres.

The production design and costuming is sumptuous and appealing -- if not quite reaching Intolerance levels of ambition. They certainly offer another good reason to give this flick a spin. 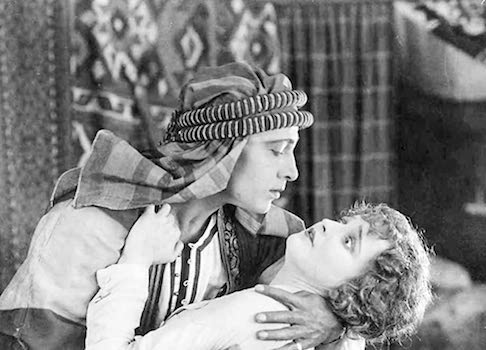 The Blu-ray
The Sheik is spine #25 in the Paramount Presents series. The standard keepcase has a glossy cardboard slipcover that opens to reveal the theatrical poster design. A Digital HD code is included.

The Video:
It's pretty tough to find consistent film elements for productions of this age, and this AVC-encoded 1080p 1.33:1 presentation is not as spotless as a modern production. For the most part, the image is quite strong, with good detail and clarity. There's pretty consistent dirt and damage, but the look is generally stable. Many of the title cards -- and a few stray shots -- look like they were taken from a very soft and blurry dupe. Tinting has been applied digitally.

The Audio:
A synth score by Roger Bellon is included in Dolby TrueHD 2.0. Sometimes it sounds like it should be accompanying a John Carpenter adventure rather than a classic romance, but I actually quite enjoyed the semi-irreverent treatment. Optional French subtitles can be deployed for the title cards.

Final Thoughts:
Silent film fans might enjoy The Sheik, but I expect they will find more value in appreciating its place in film history. Rudolph Valentino is a unique presence, but I don't know if I would categorize his performance here as "good" necessarily. In other words, I'm fascinated, even if I'm not in love. Recommended. 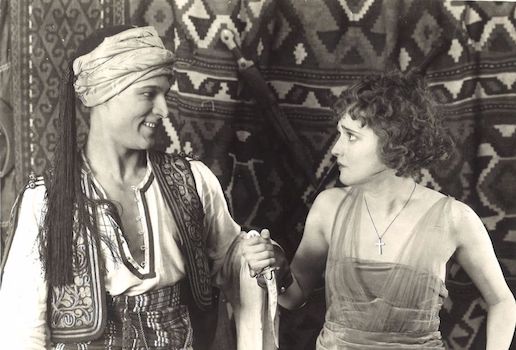