I'd wanted to see director John Huston's Freud (1962) for maybe 40 years, but I wasn't expecting a film as startlingly good as it turned out to be. I think I had anticipated something along the lines of Huston's Moulin Rouge (1952), his film about painter Toulouse-Lautrec. That was a sumptuous, visually innovative work marred by dreary and conventional biopic melodrama. Visually, Freud is equally innovative -- it must have been a big influence on David Lynch, with The Elephant Man practically a fraternal twin -- but turns out that Huston isn't all interested in telling the life story of Sigmund Freud. Rather, he's far more concerned with Freud's process of discovery (and self-discovery) into the darker reaches of the subconscious. In that sense the movie is less like Moulin Rouge than Huston's earlier documentary about post-traumatic syndrome among returning U.S. soldiers after the war, Let There Be Light (1946). In that film he presents disturbing, real cases matter-of-factly, if with much empathy. Here, Huston digs even deeper, visualizing the subconscious of the mentally ill, with Montgomery Clift's Freud acting almost like the lens of a microscope.

Freud (absurdly subtitled The Secret Passion in Universal's advertising, but not onscreen) doesn't make most lists of Huston Top 10 or 20 films, but it's way up there. Probably the film's failure and its relative obscurity today is because for so long it was a very difficult film to see at all. Apparently, it was unavailable in any home video format until a 2012 DVD release in the U.K., and this may be its first official release in the U.S. Apparently Universal cut the 140-minute version Huston prepared by 20 minutes for its general theatrical release, but Kino's Blu-ray, thankfully, is Huston's cut. 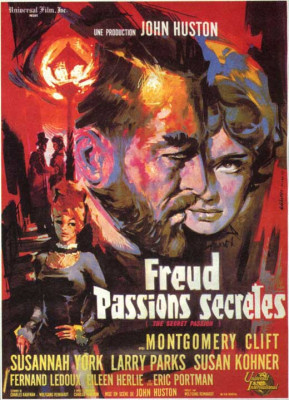 After some interesting narration spoken by Huston, abstract images under the opening titles, whose font coincidentally is identical to that of TV's The Twilight Zone (the similarities continue with Jerry Goldsmith's evocative, atonal score; Goldsmith wrote many experimental Twilight Zone scores also), the picture only vaguely sketches out Freud's personal life and professional career. His theories about the subconscious mind and advocacy of hypnosis are scoffed at by the medical establishment, represented by Dr. Meynert (Eric Portman, of several Powell & Pressburger classics), who mercilessly ridicules Freud. He marries Martha (Susan Kohner, in her last film role) in a traditional Jewish ceremony, but rather than the expected long-suffering wife loyally sticking by her husband, Mrs. Freud turns out to be highly intelligent and thoughtful, sometimes perceiving issues Freud, for various reasons, cannot. He finds a collaborator in Dr. Joseph Breuer (Larry Parks, emerging from ten years of the Blacklist) and they begin applying their theories on various patients.

Freud gradually deviates from Breuer's methods, finding better success at dream analysis than hypnosis, and worries his friend when Freud proposes that all psychological maladies are rooted in sexuality, even at a pre-pubescent level, Oedipal notions that disturb even Freud's greatest advocate. As Freud treats patients including Cecily Koertner (Susannah York), he begins to recognize his own psychoses and manifests symptoms through his sessions with others. They begin to haunt his own dreams, and he's overcome even in the daytime, unable to enter the graveyard where his father is buried, leading him to question his mother (Rosalie Crutchley, actually only months older than Clift) about his own past.

This was Montgomery Clift's penultimate film. Once rivaled only by Brando among his generation, by the time he made Freud Clift was a mess, abusing drugs and alcohol in the wake of a horrific 1956 car accident combined with the enormous pressures of hiding his homosexuality from the public. He was brilliant as a psychologically damaged victim of Nazism in Judgment at Nuremberg (1961), his previous film, but it was hard to tell how much of that was acting. Yet, in Freud, Clift is positively brilliant. It's not anything like what one usually sees in these types of films, the ahead-of-his-time genius passionately but mostly unsuccessfully trying to persuade the establishment to look to the future. Well, there is that, but it's presented in a completely different manner.

Appropriate for the father of psychoanalysis, Clift's Freud is primarily an observer. While the film has long scenes of Freud making presentations to peers, debating theories with Breuer, etc., what sticks with the viewer are scenes of Clift listening to his patients, asking intelligent and probing questions, then trying to make sense of what they say. I never regarded Clift as one of the great listeners in movies, but he's certainly one here.

Huston's film may have been something of a pet project, but it was one that went through a long, troubled process of its own, beginning with a much too long screenplay by, of all people, Jean-Paul Sartre, who submitted a five-hour screenplay. When Huston declared it too long to work as a commercial movie, Sartre sent him an eight-hour one. Elements of that attempt remained in the film, but even Huston's version originally ran more than three hours; when he cut it down to two hours and twenty minutes, Universal cut it further. In this cut, prolific English character actor Allan Cuthbertson appears in early scenes as a character called Wilkie, but I don't recall him having a single line of dialogue. Most of what was cut appears to be from the first third of the story. Additionally, Huston by some accounts treated his actors, at least Clift and York, rather sadistically, which he was known to do from time to time. Regardless, it's amazing how frank the final film is regarding sexuality, even in this form. A French or Swedish production wouldn't have thought twice, but for a Hollywood major in 1962 it's almost shocking.

Huston's subconscious/dream sequences are remarkable, especially for the time. Visualizing dreams in movie form is something of a fool's errand; if even Kurosawa couldn't really pull it off, no one can. But Huston comes awfully close. It also captures the European locations without ever resorting to picture-postcardisms; the look and feel of late 19th century Europe is remarkably authentic.

Licensed from Universal, Freud is presented in a new 2K master, in black-and-white and 1.85:1 widescreen, with the aforementioned 140-minute cut prepared by director Huston. The image is outstanding throughout, essentially flawless. The DTS-HD Master Audio mono is also fine, though I did find myself adjusting the volume as some of the dialogue track comes out a little harsh, perhaps a result of some of the location audio. (Several voices in the film were re-looped by Paul Frees). Optional English subtitles are included on this Region "A" encoded disc.

Supplements include a new audio commentary track by writer Tim Lucas, done in his usual exhaustive and insightful manner. A "Trailers from Hell" segment with Howard Rodman is derived from Universal's The Secret Passion release, which contrasts sharply with a separate trailer, one that consists almost entirely of John Huston addressing the movie audience directly, followed by arthouse-style quotes from rave reviews at the end. Intriguingly, Huston lacks the usual twinkle in his eyes and delivery, instead looking weary, almost defeated. Neither sells the film well.