The frequently hilarious - and hysterically anticommunist - Jet Pilot (1957) encapsulates in 112 glorious minutes all of producer Howard Hughes obsessions, from the latest feats of aircraft engineering to the engineering of co-star Janet Leigh's breasts. The ludicrous plot has American test pilot John Wayne passionately in lust with Soviet pilot Leigh (!) while simultaneously detesting everything she stands for. "I hate your insides and vice-versa," he says, woefully. Chockfull of anticommunist digs and pro-capitalist exaltations, Jet Pilot has long been regarded as high camp, a movie "so bad it's good."

But is it bad? Watching it again via Kino's new Blu-ray, I found myself wondering if maybe, just maybe, those laughs weren't intentional. Its writer-producer, Jules Furthman, was no slouch. Indeed, his screenplay credits include many classics, among them Mutiny on the Bounty (1935), Only Angels Have Wings (1939), To Have and Have Not (1944), The Big Sleep (1946), and Nightmare Alley (1947). He did eight films each for Jet Pilot director Josef Von Sternberg and Howard Hawks, prompting a question that kept rolling around my mind again and again while watching this film: If Hawks had directed, and Jet Pilot had been advertised as a comedy, maybe it'd be regarded as a deliberate comedy classic. Though executive producer Howard Hughes clearly had no sense of humor, and Sternberg might not have recognized the comic potential in Jet Pilot's script, it's clear to me that Furthman sure did, and that much of what makes the film so funny was absolutely intentional. 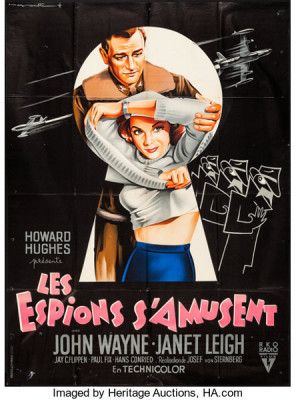 Russian - but American-accented - defector Lt. Anna Markadovna (Leigh) lands her Soviet jet fighter at a USAF base somewhere in Alaska, seeking asylum.* Air Force Colonel Jim Shannon (Wayne) is skeptical, but when he has her strip down so that she can be searched, his eyes nearly bug out marveling the "silly Siberian cupcake," as he describes her. When her breasts all but pop out of her jumpsuit, roaring jets overhead roar like wolf whistles. And no wonder, as Leigh is incredibly sexy in these scenes.

Anna's sincerity about defecting is called into question when she's not forthcoming with useful data about the Soviet's jet program, Shannon is assigned to seduce her, setting its Cold War Ninotchka plot into motion. That includes wooing her with a trip to Palm Springs and good ‘ol American steaks as thick as chiffon cake. Between sharing their love for flying and obvious physical attraction, the two seem to be falling in love, but their opposing ideologies remain stubbornly inviolate.

The film had the kind of backstory typical of Howard Hughes. As with a number of other films made during his disastrous reign as owner of RKO, notably His Kind of Woman and The Whip Hand, Hughes tinkered endlessly on the film for years. Most of Jet Pilot was shot in October 1949 through February 1950, but additional scenes were filmed as late as May 1953, and Hughes continued fiddling with it until its belated premiere in September 1957, nearly eight years after it began. By then the industry had switched to widescreen, Hughes all but destroyed RKO, and the film had to be distributed by Universal.

Hughes had envisioned something like a Cold War Hell's Angels, his 1930 success notable for its still-impressive aerial sequences. On big screens Jet Pilot definitely offers impressive aerial photography of military jet aircraft several cuts above the usual level of this sort of thing. While the fighters themselves had already become dated by the late-‘50s, the photography of these now-museum pieces is rather remarkable. Indeed, scenes of Shannon and Anna flying in separate aircraft, seducing one another with their aerial acrobatics, have an almost dance-like grace.

The story, of course, is ludicrous, becoming even more extreme when, in the third act, the action moves to an almost cartoony Soviet Union. Janet Leigh, at least, seems in on the joke, unlike Wayne, who plays the courtship stuff playfully but oozes with sincerity when talking up capitalism or expressing his hatred of commies.

Wayne was largely apolitical until after the war, when guilt from not having served during World War II (he put his career ahead of patriotism) led him to the political right and support for the Blacklist. He was neither as extreme or stupid as his good friend Ward Bond, and even Wayne regarded Jet Pilot as an embarrassment.

For Leigh, she wasn't above playing her sexuality to the hilt. Just 22 years old at the time, she must have been determined to make it in Hollywood; Jet Pilot was something like her seventh movie that year alone. As Randy Roberts and James S. Olson described her in their indispensable biography, John Wayne: American, "Throughout the film Janet Leigh wears bras that look as if they had been built out of reinforced concrete."

Licensed from Universal, Kino's Jet Pilot is generously offered in two formats: the 1.37:1 standard frame for which almost all of it was originally framed, and in cropped 1.85:1 widescreen, the format in which it was finally theatrically released. (The widescreen version has heavily window-boxed opening titles.) Photographed in Technicolor, both versions play quite well, and much of the photography is outstanding. The DTS-HD Master Audio (mono) is fine and optional English subtitles are included on this Region "A" encoded disc.

Other than the two versions of the film, the lone extra is a curious reissue trailer c.1979. The bulk of it is from the 1957 release trailer, but this features a different opening, one narrated by Percy Rodriguez, the prolific voice actor heard on myriad trailers of the ‘70s and ‘80s, most famously Jaws. He plays up the film's connection to Howard Hughes, whose mysterious final years were big news at the time.

Good or bad, Jet Pilot is undeniably entertaining, though whether its big belly-laughs were intentional is debatable. Highly Recommended.

*When it's first sighted on radar, Shannon jokes that the "bogey" might be a flying saucer. Given this scene was probably shot in late-1949, that would make it one of the first, if not the first mentions of this phenomenon in a Hollywood movie.