To Hell and Back

I don't have a whole lot to say about To Hell and Back (1955), the biopic-war movie based on the 1949 autobiography of Audie Murphy, the most decorated hero of the Second World War. The movie, of course, is unique in one aspect: Audie Murphy, a leading player in Hollywood movies from 1949, plays himself.

This adds an undeniable layer of verisimilitude, but the movie is hamstrung by Production Code restrictions and the political climate of the time. The film is largely bloodless, with none of the wartime "Hell" that later, more honest films like Platoon and Saving Private Ryan were able to bring to the screen. In life, Murphy suffered from what today we'd call extreme post-traumatic stress disorder, but there was no chance of any of that reaching the screen during the height of the Cold War.

And while produced on an impressively large scale by Universal-International, the film also has a strangely antiseptic quality apart from the absence of anything like realistically graphic wartime violence. Most of the film was shot near Yakima, Washington, in rural, northwestern forests and plains unconvincingly doubling for Sicily and mainland Italy and France. Other than a long sequence obviously filmed on Universal's backlot (masquerading as Naples), almost no buildings are seen. No buildings, no villages, no villagers, no nuthin' -- just a lot of wide, rolling plains and pine trees in the distance. In the second half of the story much battle action revolves around a single, half-destroyed farmhouse, the only significant structure ever glimpsed outside of "Naples." 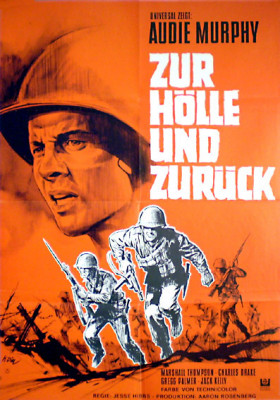 Biopics like The Jolson Story and U-I's own The Glenn Miller Story were all the rage in the early postwar years, so To Hell and Back fuses that genre with standard war movie fare. In 1937, after Murphy's sharecropper father deserts his large family, forcing 12-year-old Murphy, the eldest of nine siblings, to leave school and work for a local farmer. When his bedridden mother dies four years later and the kids are moved into foster care, the near-simultaneous attack on Pearl Harbor allows Murphy, barely 16, to join up.

The sincere but scrawny kid is rejected by the Marines, the Navy, and Army paratroopers but eventually enlists successfully in the 3rd Infantry Division, though even there he's nearly shipped back home due to seasickness and a violent reaction to inoculations. Quickly, however, Murphy's quiet sincerity and determination win over both his enlisted comrades-in-arms and impress his superior officers.

Another problem with To Hell and Back are issues common to most war films of this type. Though members of his squad are played by familiar actors -- Marshall Thompson, Charles Drake, Jack Kelly, Gregg Palmer, Paul Picerni and, later on, Denver Pyle and Brett Halsey -- during battle it's almost impossible to distinguish one from another as their faces are obscured by helmets and they're all dressed more or less in the same type of uniform. When one "dog face" is picked off, the audience strains to figure out which cast member bought the farm. And while the there's some effort to avoid genre stereotypes, the squad is nevertheless composed of stock character types: immigrant studying to become an American citizen, womanizer, older private anxious to return home to his family, Italian-American hoping to connect with relatives in Italy, etc., etc.

More than that, though, is that strange bubble-like quality to the big action scenes, battles with no villages or villages around. Adding to the effect is that the people they're fighting are never referred to as "krauts," "Nazis," or even, if I'm remembering correctly, as Germans. Instead, throughout the film they're only "the enemy," and rarely seen up close, even as dead bodies. Never does the politics of the war come up, such as the fact that Pvt. Valentino (Picerni), an Italian-American, is fighting Italian troops (also never seen), and the only acknowledgment of the civilian cost of war are a couple of brief scenes of the platoon interacting with impoverished children in Naples.

Audie Murphy, though pushing 30 while playing his younger self from age 16, does an admirable job recreating his own callow youth. Murphy's unassuming modesty certainly comes through, as does his bravery, though as a movie character "Audie Murphy, solider" is rather one-note, at least here. That said, there's still a genuinely great biographical film to be made about his life, particularly his troubled postwar years, when he slept with a loaded pistol under his pillow, suffered from depression and nightmares, became addicted to drugs, wrote poetry and songs, lobbied Congress for help for veterans suffering from PTSD, and tragically died in a plane crash in 1971, when he was just 45. And all that was on top of a respectable career as a movie star, occasionally in very good pictures.

Filmed in CinemaScope, To Hell and Back mostly looks excellent, though all process shots, notably scene dissolves, have the blurry graininess of early CinemaScope releases. Other than that, the image is impressively sharp. The DTS-HD Master Audio (2.0 stereo) is impressive with much use made of the surround channels, while optional English subtitles are provided on this Region "A" encoded disc.

Supplements include an overly-confident trailer (likening the film to the great war movies of the past) and a new audio commentary featuring filmmaker/historian Steve Mitchell and Combat Films: American Realism author Steven Jay Rubin.

Entertaining for what it is and a big hit in its day, To Hell and Back can't avoid seeming dated now and as a missed opportunity in portraying star Audie Murphy's life story, which would still make a terrific movie. Worthwhile, however, and Recommended.