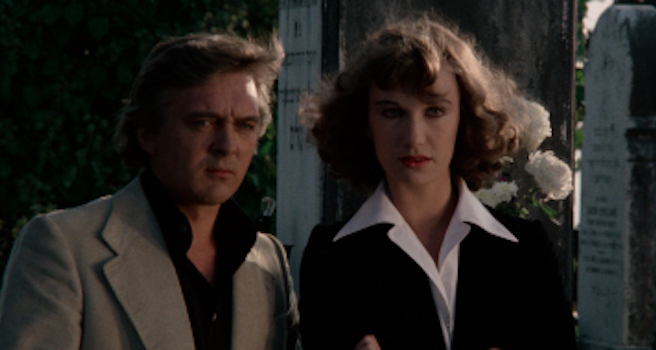 Deep Red (Profondo Rosso) is one of Dario Argento's best-known films, a signature giallo that has the seemingly perfect blend of simmering suspense, operatic camerawork, and gory kills. It has resurfaced many times in the home video disc era: DVD Talk reviewed it in 2000, in 2011 on Blu-ray and upgraded DVD, and in 2018 when Arrow sent us a check disc for their Blu-ray version. I'm not one to reinvent the wheel, so I'll defer to those great critical offerings and be brief with my personal assessment of the movie in this review of Arrow's 4K UHD reissue of their 2-disc set for the film.

David Hemmings is a jazz pianist and music teacher who witnesses the murder of a psychic neighbor (who somehow didn't see it coming... ba dum bum!). He teams up with reporter Daria Nicolodi to solve the crime while the other individuals who might have the key to the killer's identity are systematically slaughtered. It's a gory good time, scored by the seminal horror soundtrack band Goblin.

As on their most recent Blu-ray release, the 4K UHD offers the original cut of the film and the twenty-minutes-shorter unrated export cut. Call me a philistine, but I prefer the pacing of the export cut slightly -- maybe because it's the first version I saw years ago. The additional moments found in the original version mostly add to the procedural/mystery mood of the film, and yet, they don't really rob the film of all that much by their absence.

The 4K UHD Blu-ray
Deep Red is packaged with the 2 UHD discs in a standard-sized keepcase. The sleeve is reversible with new art by Obviously Creative and the U.S. poster designs as the options. A 58-page book featuring writing by Alan Jones, Mikel J. Koven, and Rachael Nisbet is included. A folded double-sided poster is included, featuring the new Obviously Creative design, backed with the original Italian Profondo Rosso poster design. And finally, six postcard-sized, double-sided lobby card reproductions. It is all housed in a slim cardboard box, with Obviously Creative's design on the front.

The Video:
I am quite impressed by this HEVC-encoded 2160p 2.35:1 presentation with Dolby Vision (HDR10 compatible). The film is full of reds that are bold without (haha) bleeding. The use of expressionist lighting and frequently stark contrast is translated here with remarkable nuance. There is increased texture and grain without looking too noisy. This is a top-shelf presentation.

The Audio:
The uncut version offers Italian DTS-HD MA mono, Italian DTS-HD MA 5.1 surround, and English(/Italian) DTS-HD MA mono audio options. Because there is no surviving English soundtrack for all the scenes in the uncut version, the English option here is a hybrid with Italian dialogue inserted back into the moments not featured in the English export cut. Personally I prefer the power and focus of the original mono mixes: the spreading out of the sound in the 5.1 remix dilutes the power of the sound design, rather than embellishing it. The export cut features English LPCM audio that seems to feature more of the actors' actual speaking voices rather than the hodgepodge of the Italian dub. All the Italian soundtracks offer optional English subtitles, while the English tracks come with English SDH options that are often phrased differently from the Italian translation.

- A newly recorded track for this 4K edition by Troy Howarth and Nathaniel Thompson is loose and chatty, but full of info. A Thomas Rostock track familiar from earlier Arrow releases feels more written but is also full of quality info.


Final Thoughts: For slasher and giallo fans who somehow haven't seen this classic, this is a no-brainer, an immediate must-own. For the long-time fan, for whom this 4K edition might be a double-, triple-, or quadruple-dip, I'm sad to say that there is so much cool new supplementary material in addition to outstanding video treatment that, yep, you're going to be opening up that wallet again. DVD Talk Collector Series.