Back in the 1970s, when Rod Serling's Twilight Zone was a substantial hit in syndication, like many others I watched its reruns obsessively. When Serling's Night Gallery joined Twilight Zone in syndication sometime later, initial excitement quickly turned to extreme disappointment, nearly heartbreak. Randomly select any 10 episodes of Zone and chances are you'll end up with a couple of great ones, six pretty good episodes, and maybe one or two stinkers. By comparison, you were lucky to get one or two good segments out of every ten Night Gallerys, with many downright embarrassing in their awfulness.

However, it turns out there was a reason Night Gallery seemed mostly terrible in syndication, and it wasn't Serling's fault or the fault of anyone else connected with the original show. Night Gallery was a one-hour series for its first two seasons, and a 30-minute show for its third and final year, episodes composed of multiple segments of varying length, as little as five or ten minutes, and as long as 40 minutes or thereabouts.

For syndication purposes Universal radically retooled Night Gallery in order to sell it as a 30-minute show throughout, with enough episodes to make it desirable to markets wanting to air it five times per week. Segments that ran long were ruinously cut for time, while those too short were painfully and unimaginatively expanded using outtakes and stock footage from old Universal movies and TV shows, all with the subtlety of using scissors and a sledge hammer to force mismatched jigsaw pieces together. Reportedly, four-tenths of the segments, 39 of 98, were severely altered for their syndicated versions. Further, 25 episodes from a completely unrelated, short-lived hour-long series, The Sixth Sense, lost 50% of its original running times and dumped into the package, Serling filming new intros for those prior to his death in 1975.

Kino's new Blu-ray, by contrast, presents the original pilot film/TV-movie and short first season of Night Gallery (1969-71) as they originally aired. By no means does this fix all the show's many problems, but it does play significantly better. It still doesn't hold up as well as Twilight Zone nor does it have that earlier series' high batting average. But, in its original form, combined with the startlingly good video transfers and worthwhile extra features, Night Gallery is once again a fun if sometimes frustrating show to watch. 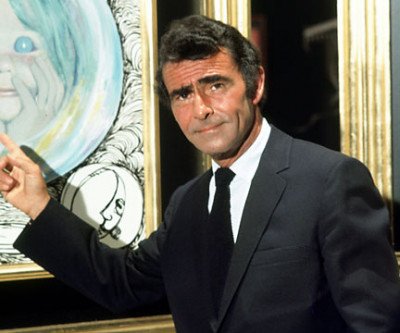 The series seems to have resulted from the popularity of horror anthology films like those produced by Britain's Amicus Productions as well as ongoing sales of horror fiction and comic books like Gold Key's Twilight Zone comics and similarly tame ones like Boris Karloff Tales of Mystery, comics popular long after the demise of both Twilight Zone and Boris Karloff.

The Blu-ray set opens with the TV-movie/pilot film, also called Night Gallery, which originally aired on November 8, 1969, and which exemplifies all the good and most of the not-so-good aspects of the series to follow. Its three segments, all written by Serling, are "The Cemetery," about a conniving nephew (Roddy McDowall) who, after murdering his invalid uncle (George Macready), is haunted by a family painting that appears to show the uncle's corpse leaving the graveyard and heading toward the family mansion; "Eyes" follows a wealthy, tyrannical blind woman (Joan Crawford), undergoing an unethical operation to restore her sight for a limited time; and "Escape Route" revolves around a Nazi fugitive (Richard Kiley) in South America trying to escape his past by willing himself into a serene museum painting.

The pilot famously marked the professional directorial debut of Steven Spielberg, then just shy of his 23th birthday. That would be remarkable all by itself but his segment, "Eyes," is also by far the best-directed of the three segments, notable for its imaginative camerawork and editing, innovations that greatly enhance the already well-written segment. The other two, directed by Boris Sagal and Barry Shear, better-than-average TV helmers, exhibit flashes of imagination here and there, but Spielberg's has far more camera set-ups, more visceral camera angles, and very imaginative, almost musical cutting.

When Night Gallery became a series 13 months later, the same format was adopted, albeit within a tighter, 60-minute format. It had several advantages over Twilight Zone: the segments had flexible running times, and because Night Gallery's first season was part of a larger, "wheel series" with three other programs (McCloud, San Francisco International Airport, and The Psychiatrist) only six one-hour episodes were produced that entire first year. (Perversely, however, these shows did not alternate with one another but shot their wads on consecutive weeks, with the Night Gallery shows airing in December 1970/January 1971.) Compare that to Twilight Zone's first season, which aired 36 half-hours, of which Serling wrote teleplays for 28 of them!

On the other hand, watching these (at last) uncut/unaltered shows, it's clear Night Gallery still had several problems going in, namely: 1) With rare exceptions, Serling was completely burned out as a dramatist; 2) Universal's sausage factory "house style" proved far inferior to Twilight Zone "mini-movie" look, aided by that program's access to MGM's facilities and backlots; 3) Good segments are frequently undermined by bad ones, and promising/moody segments often disappoint with tame or sloppily-realized payoffs.

Rod Serling had been one of early television's great writers, famous for shows like Patterns and Requiem for a Heavyweight. Seeking more independence via Twilight Zone, Serling worked like a dog those first several years, committing himself to show (and protecting its other writers) while also writing feature film screenplays, appearing on TV shows and in commercials, and even teaching university writing courses. Of the 28 Twilight Zone episodes Serling wrote that first season, all but one is very good to excellent, including some of his best-ever writing (as in "Walking Distance," possibly Zone's finest episode). In its fifth and last season Serling wrote 17 of 36 episodes, and roughly half of those are pretty bad, though he'd still rise to the challenge occasionally, penning a few memorable shows even then.

After Zone Serling never fully recovered. At the time of Night Gallery he was narrating, sometimes spoofing his persona in myriad TV commercials and hosted a game show, the original version of The Liars Club. He received a co-writing credit on the wildly successful film of Planet of the Apes (1968), but Serling's work on that appears mostly confined to the earliest drafts, c. 1963 or so when it was tied with director Blake Edwards at Warner Bros. Much of Serling's script was rewritten by Michael Wilson.

Universal's artless grindhouse style compares unfavorably to the more polished and cinematic Twilight Zone. The lighting is often harsh and unflattering, some of the sets, props, and special effects look cheap, even threadbare (e.g., in "The Nature of the Enemy"). Besides Zone acting veterans like Burgess Meredith and William Windom, the series employed Zone directors such as Douglas Heyes along with in-house Universal talent like Jeannot Szwarc and Spielberg (who came back for a regular segment), but also actors drafted into directing segments: Jeff Corey and John Astin here.

Ultimately, though, Night Gallery is a very mixed bag, one that even when a good segment comes along, a terrible one within the same episode is like a bad apple spoiling the barrel. Episode 2, for instance, opens with the okay "Room with a View," a two-character piece intriguingly featuring Joseph Wiseman opposite a young Diane Keaton; and "The Little Black Bag," a promising sci-fi/horror tale with strong leading performances by Burgess Meredith and Chill Wills. But what those segments achieve is thwarted by "The Nature of the Enemy," an awful shaggy-dog story with dreadful production values, special effects, and a ludicrous "twist" ending. It's easily among the worst writing Serling ever did.

And a few of the episodes stand out, most famously "They're Tearing Down Tim Riley's Bar" (by Serling, directed by Don Taylor), an episode criminally butchered for syndication but restored here. William Windom delivers what amounts to a signature performance, while Serling's teleplay hints at what Night Gallery should have been all along.

Licensed from Universal, Kino's Night Gallery packs the pilot and short first season plus extras onto just two Blu-ray discs. The 1.37:1 image throughout, 2K restorations of inter-positives, is excellent, with much greater detail visible, though I did notice some of the day-for-night photography wasn't timed correctly, with nighttime scenes appearing as broad daylight. The DTS-HD Master Audio (mono) is fine throughout and optional English subtitles are included on these Region "A" encoded discs.

Nine audio commentary tracks are included, featuring the likes of writers Gary Gerani, Jim Benson & Scott Skelton, Tim Lucas, Amanda Reyes, Kim Newman & Stephen Jones, Craig Beam, and filmmaker Constantine Nasr. The most valuable extra is "The Syndication Conundrum: A Look at the Show's Troubled Second Life in Reruns," which goes into considerable detail about changes made to episodes for syndication, and which is followed by a side-by-side comparison of the original and syndicated versions of "They're Tearing Down Tim Riley's Bar," presented in their entirety. A modest insert booklet is also included.

While this review may appear overly harsh, I mostly had a great time revisiting Night Gallery and seeing many segments as they originally aired for the very first time. The transfers and extra features make this package very desirable, and the set is Highly Recommended.