A respectable and mostly very accurate and suspenseful recreation of a real-life tragedy, 21 Hours at Munich dramatizes the taking of nine members of the Israeli Olympic Team by Palestinian terrorists belonging to the Black September group during the 1972 Summer Olympics. It originally aired as a TV-movie on the ABC network on November 7, 1976, followed by a theatrical release in European counties and elsewhere during 1977-78. It was shot with both screen shapes (4:3 and 1.66:1 or 1.85:1) in mind.

The movie, shot almost entirely in English, stars William Holden, Shirley Knight, and Franco Nero, with Anthony Quayle and Richard Basehart all playing real-life historical characters. Moreover, the entire picture was filmed in Munich using the actual locations, particularly the Connollystraße area of the Olympic Village, and Fürstenfeldbruck, a NATO airport where the crisis came to its violent end. 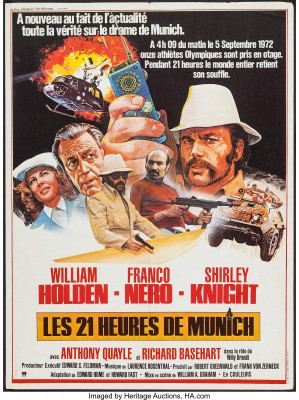 In the pre-dawn hours of September 5, 1972, two weeks into the Games, eight members of the Black September faction of the PLO scaled the low-security fence surrounding the village and, with virtually no security present, gained access to two apartments housing Israeli athletes. A couple managed to flee, several fought back using kitchen knives, and two were fatally shot, but nine hostages were successfully taken.

In the movie, William Holden plays Chief of Police Manfred Schreiber, more or less the main character, with Franco Nero playing "Issa" (real name: Luttif Afif), leader of the terrorists. Shirley Knight is Anneliese Graes, a chief detective who acted as a mediator between the German officials and Issa, while Anthony Quayle and Richard Basehart have much smaller roles as Israeli General Zvi Zamir and German Chancellor Willy Brandt, respectively. In larger parts but with lower billing are Hammer Films actor Noel Willman and George Marischka as Interior Ministers Bruno Merk and Hans-Dietrich Genscher.

The appeal of 21 Hours at Munich is mostly in its meticulous recreation of events. Impressively, even very tiny details of the hostage taking and subsequent negotiations are accurate, and the fact that these scenes all play out in the very places they occurred adds an eerie verisimilitude.

The picture is largely content to let these recreations play out, without any significant editorializing. West Germany, already sensitive to the lingering memories of the 1936 Summer Olympics under Hitler, hoped the Games in Munich would transform (West) Germany's image throughout the world, but the terrorist act, no matter that it was instigated by Palestinian terrorists, put the country in the awkward position that Jews might again be mass murdered on German soil. Complicating matters is that Israel and its Prime Minister, Golda Meir (Else Quecke), outright refuse to negotiate with the terrorists at all, and when they make plans to fly themselves and their hostages to Egypt, Prime Minister Sedki (Osman Raghab) refuses to let them enter his country. All this forces German officials into a very risky rescue attempt on their own.

The movie addresses this while somewhat downplaying or omitting the many failings of German efforts to rescue the hostages. Not mentioned in the film was that the West German constitution prevented intervention from the army, which was not allowed to operate within Germany during peacetime. This forced the issue into the hands of the ill-equipped Munich Police, who had little to no antiterrorist training. Even the alleged sharpshooters seen late in the film had no experience as snipers, used inadequate rifles, worked without the aid of radios, and were chosen from officers that merely competed at a local firing range on weekends.

The movie also treads lightly in its criticism of the Olympic Committee's incredible decision to continue the Games during the hostage crisis before public outrage forced a brief (36-hour) suspension. The film argues with some persuasiveness that had the Games been suspended at the height of the negotiation phase more athletes, spectators, and press would have descended upon the Olympic Village and only created more logistical problems. In light of the IOC's recent determination to hold the Tokyo Olympics in the middle of deadly global pandemic, these scenes of IOC greed-driven insensitivity now play rather prescient.

Though one might have preferred German actors playing Germans, etc., the use of Hollywood stars, as well as Italian actor Franco as "Issa," all come off well, particularly the almost always reliable Holden. Director William A. Graham, known primarily for his work in television, later directed Guyana Tragedy: The Story of Jim Jones (1980), for which he was nominated for an Emmy.

Produced by Filmways and licensed from MGM, Kino's Blu-ray of 21 Days at Munich offers the film in both its 4:3 TV format, and in 1.78:1 widescreen, the latter format preferable overall. The image is strong throughout, sharp with accurate color. The DTS-HD Master Audio (mono) is acceptable and optional English subtitles are provided on this Region "A" encoded disc.

Supplements include a new audio commentary by film historian and screenwriter Gary Gerani. A spoiler-filled trailer for the theatrical version, like poster art for the film, sell it as a cheap exploitation thriller, which the movie itself is anything but.

Not a great film per se, but completely engrossing and fascinating on its own terms, 21 Hours in Munich is Highly Recommended.