The 3-D Film Archive strikes again with Revenge of the Shogun Women (1977), made by the same people responsible for that other delirious martial arts extravaganza also restored in 3-D, Dynasty. As with that earlier title, the indefatigable folks at 3-D Film Archive had their work cut out for them; the surviving film elements were in terrible shape, and that was on top of misalignment and other issues inherent in the original 3-D photography. The end result is unavoidably eye-straining at times, but the 3-D is a near-constant barrage of in-your-face effects, and the movie is escapist grindhouse fun. Supplements include three incredibly rare, nearly-lost-forever 3-D shorts.

It's yet another example of the exceptional restoration and value-added work 3-D Film Archive reliably does despite tight budgets; rights holders of 3-D titles really should be outsourcing and/or licensing more library titles their way. 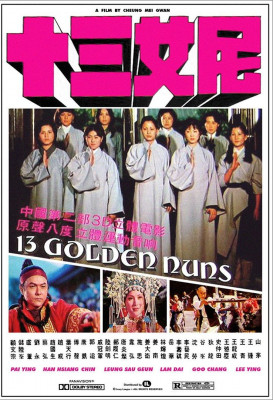 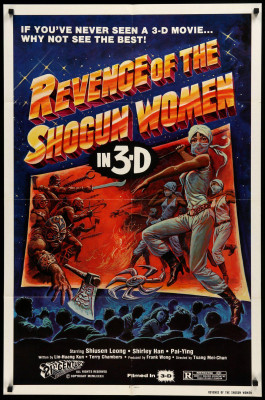 A Taiwanese-Hong Kong co-production originally released as Shi shin nu ni and alternatively known in English as 13 Nuns, Shogun Women, and Revenge of the 13, like Dynasty the action is near-constant, the plot is almost nonexistent, and the characters are genre clichés, but it's also undeniably lively and jam-packed with incident, and the 3-D effects are mostly very good.

The movie opens with a nighttime raid by marauding bandits who kill with impunity and rape all the women in sight. The rape victims, no longer virgins, have their heads shaved (for real, in a montage recalling the prelude to Full Metal Jacket) and shipped off to a Buddhist convent where they're trained by the "head shogun nun" in the martial arts, apparently to protect themselves or others from future assaults, though given what happens later this makes no more sense than the rest of the story.

Meanwhile, lovely Wu Chin (Shirley Han, aka Han Tsiang-Chin) falls ill, her family sending for handsome doctor, Choa (Chiusen Leong), who prescribes a controversial treatment: acupuncture on her -- gasp! -- naked breast. To get around this, her father arranges Choa to marry his daughter first, for which neither bride nor groom object. However, local painter Chu (Kim Yung Koo), in unrequited love with Wu Chin, conspires with the leader of the bandits (Pai Ying) on a future raid in hopes of winning her by force.

During the raid, the desperate villagers seek sanctuary and assistance from the shogun women, but the recently appointed head nun is reluctant to fight the bandits owing to their Buddhist faith, causing a rift among them. Eventually villagers are allowed onto the convent grounds, but it's only a matter of time until the bandit chieftain violates its sacredness.

As with Dynasty, what plot there is matters not in the slightest. Where the film delivers is in its non-stop action set pieces, some of which is fairly epic for an independently produced martial arts movie from Taiwan/Hong Kong. Lots of extras running around fighting one another spectacularly amid large period sets. The convent at first to me seemed like a real and very extravagant Buddhist temple, but it's half-destroyed by the end in a blaze of explosions and other mayhem, likewise the presumably expansive backlot streets seen in the picture. And like Dynasty the stunt work at times borders on balletic, flying jumps and acrobatics that anticipate later acclaimed films like Crouching Tiger, Hidden Dragon, with editing and camera framing of an above-average martial arts film, while simultaneously maximizing the 3-D. Yes, spears, arrows, and the like are thrust into the camera lenses non-stop, but generally the staging is more in the style of ‘50s 3-D Westerns and the like, rather than the later, ‘80s revival titles.

The 3-D Film Archive version of Revenge of the Shogun Women begs numerous questions. It appears to originate from a 1981-82 U.S. release significantly altered from its original Asian version. It features a rather bland synthesizer score; many martial arts movies of this period blatantly stole western-world film music (by John Barry, Ennio Morricone, etc.) so perhaps its U.S. distributors were looking to avoid a lawsuit. The English dubbing is typically terrible but possibly done in the U.S. as well, given the absence of thick Australian accents and the like that often turn up in these dubbed-and-daffy releases.

And need I mention "shogun" is a term particular to Japan?

Like Dynasty, Revenge of the Shogun Women was filmed in a process called Super-Touch 3-D (later called Optimax III), an "over-and-under" single camera process similar but inferior to the more familiar Space-Vision yet compatible with a much wider range of 35mm cameras. The downside was that it was almost perversely complex in design, and ultimately used on just six feature films to date. The restoration of the 2.35:1 ‘scope image offers better-aligned 3-D which, 99% of the time, looks great, though disclaimers warn some problems were "burned in" to the original camera- and print-work that no amount of computer color correction could fix. Undoubtedly aware of the many genre fans without a 3-D Blu-ray set-up, they've included an anaglyphic version as well, along with one pair of red-cyan glasses (more can be ordered). That process works great with 3-D comic books but is terrible with color movies, though it's a nice accommodation for those folks. The audio is, unlike Dynasty, in DTS-HD Master Audio mono (Dynasty offered impressive stereo surround). The film is presented in its English-dubbed version only. Region "A" encoded.

Beyond the anaglyphic version of the feature and the pair of red-cyan glasses, the main supplement is a collection of three 3-D shorts. The first and best is College Capers (1953), a two-reel comedy produced by Poverty Row company Lippert, though directed by acclaimed film editor (and later producer) Elmo Williams. Featuring a no-name cast of "co-eds" -- the men all look like they're in their 40s -- the story concerns an old-fashioned panty-raid, an excuse for a lot of lame slapstick but terrific 3-D effects: soap bubbles, a pillow fight (with feathers lingering in mid-air), etc., and Williams's staging is often very clever. Dolores Fuller, director Ed Wood's actress-girlfriend at the time, is easy to spot as one of the sorority sisters. Persian Slave Market (1953), a one-reel short, is one of those titles I'm grateful the 3-D Film Archived rescued from oblivion, but it's of very little interest to the viewer, consisting of burlesque-type strippers plying their wares before a stationary camera shooting too far away from an uninteresting angle to even have much 3-D impact. The final short, Two Guys from Tick Ridge (1973), is a real oddity. It opens flat (2-D) as two men enter a screening room in Los Angeles, one trying to impress the other with his home movie-like 3-D photography. When it switches to 3-D some of the images are very impressive (disembodied head, more soap bubbles) and, at first, I thought this might be some kind of demo film to sell a 3-D process/camera gear to industry insiders. But then, peculiarly, the character dragged into the screening begins complaining about the lack of story, and even some of the 3-D! Odd.

For various reasons a half-point less impressive than the earlier release of Dynasty, Revenge of the Shogun Women is still enormous fun for both 3-D enthusiasts and martial arts fans and is Highly Recommended.