Critics and audiences seem to agree that Heaven Can Wait (1978) is an interesting failure or maybe a modest success but that, ultimately, it's a movie one feels almost guilty for feeling underwhelmed having watched it. It was nominated for scads of awards, including nine Oscar nominations, in all the major categories, but its stock has dropped considerably in recent decades.

It's not a remake of Ernst Lubitsch's Heaven Can Wait (1943) but rather Alexander Hall's equally wonderful movie called Here Comes Mr. Jordan (1941). The remake, starring and co-directed by Warren Beatty (with co-writer/co-star Buck Henry, who adapted it with Elaine May), follows the plot and spirit of the original pretty closely, and the casting of the remake is nigh perfect: Beatty, Julie Christie, James Mason, and Jack Warden are all excellent in parts originally played by, respectively, Robert Montgomery, Evelyn Keyes, Claude Rains, and James Gleason. Beatty tried luring Cary Grant out of retirement to play Claude Rains's old part, but Mason is a much better fit, and Jack Warden is even better than James Gleason, remarkable considering how good Gleason was in the original. 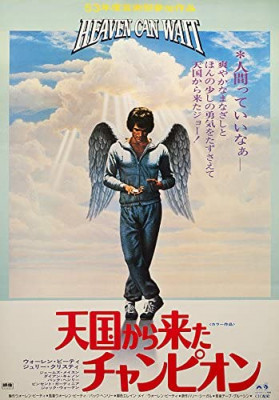 In the remake, Beatty plays Joe Pendleton, an aging yet, contradictorily, up-and-coming backup quarterback for the Los Angeles Rams, the team Super Bowl bound. The coach is considering Joe to start next week's big game, but then Joe, training on his ten-speed, is seemingly killed in a head-on collision in traffic. At a way station en route to heaven, Joe discovers that his inexperienced Escort (Buck Henry) plucked him up too early: Joe was not destined to die until 2025.

This unprecedented heavenly accident is conveyed to the Escort's enigmatic superior, Mr. Jordan (James Mason), who orders Joe's soul put back, but by now Joe's body has already been cremated, forcing the afterlife agents into a compromise: put Joe into the body of another man about to die. Joe temporarily agrees to inhabit the body of Leo Farnsworth, a Los Angeles-based billionaire, Joe agreeing mainly because he's smitten with Betty Logan (Julie Christie), a schoolteacher chosen to represent her English seaside village in opposing Farnsworth's plans to build an environmentally destructive refinery there.

Complicating matters (as if matters weren't complicated enough), the original Farnsworth was murdered, poisoned in his bath, by his wife, Julie (Dyan Cannon) and her lover, Tony Abbott (Charles Grodin), Farnsworth's personal secretary. When Farnsworth/Joe emerges none worse for the wear, they become frantic about killing him before he reports their nefarious activities to the police.

Joe, meanwhile, falls in love with Betty and hires his best friend and trainer, Max Corkle (Jack Warden), Joe eventually convincing Max that he's actually his old friend but in a different body. Joe buys the Rams and convinces Max to get him into shape so that he can quarterback in the upcoming Super Bowl, a seemingly impossible task.

The most obvious difference between the original and the remake is that in Here Comes Mr. Jordan Joe is a boxer and in the remake he's a quarterback. This was done to accommodate Beatty, who lacked boxing skills but had been a star player in high school. (Reportedly, Beatty was offered no less than 10 football scholarships but turned them all down to study acting.) While Beatty is reasonably convincing as a quarterback, it does change the dynamics a little. Boxing is a sport of individual achievement while, in theory at least, a quarterback is supposed to be one component of a larger team. In the remake, Joe wanting both a chance to play and win the Super Bowl single-handedly strains credibility.

I haven't seen Here Comes Mr. Jordan since the laserdisc era, but what sticks in that memory are its sweet romance, and, especially, the scenes with Robert Montgomery and James Gleason, and those with Montgomery, Claude Rains, and Edward Everett Horton, who plays the Buck Henry part. The murder plot in Here Comes Mr. Jordan is, if memory serves, a minor part of the story and their characters played by lesser actors (Rita Johnson and John Emery). One problem with Heaven Can Wait is that the Charles Grodin and Dyan Cannon characters are given more time onscreen and more funny things to do.

There's some good material here, but their screentime subtracts from other character interactions that all feel like they need one more good scene apiece: Joe and Betty, and Joe and Max. The Joe and Betty scenes have real charm (Beatty later said Julie Christie's performance saved the picture) but their mutual attraction feels awfully rushed. Likewise, Joe and Max's close relationship is given one short scene at the beginning to establish itself. The payoff of Max recognizing Joe-in-Farnsworth would pay off better if their close relationship was better established at the beginning. A board meeting/press conference in the middle of the film seems out of place, a chance to satirize evil conglomerates (and billionaires) that loses sight of the original film's heart. Late in the film, when a police lieutenant (Vincent Gardenia) turns up, the climax really gets rushed and muddled. Oddly, remove the opening and end credits of the remake and the two films have almost identical running times.

Part of the appeal of the original is that Robert Montgomery's Joe is uneducated and very working class, his lack of pretension combined with a basic decency and common-sense Mr. Jordan finds appealing. (Curiously, the remake deletes the great final line of the movie, spoken by Mr. Jordan.) Beatty, to his credit, finds a nice middle ground with the same character, playing him more subtly while retaining all of these qualities.

Paramount's Blu-ray of Heaven Can Wait (which includes a digital copy) presents William A. Fraker's 1.85:1 soft widescreen cinematography (reconfigured here for 1.78:1) in the best possible light. (Fraker favored soft & fuzzy compositions during this period.) Colors and sharpness are strong, and the video transfer even retains about one minute of exit music after the end credits. The Dolby TrueHD 2.0 mono is likewise strong for what it is. Dolby Digital mono tracks in French, Spanish, and German are also offered, along with subtitle options in all those languages plus Japanese. The disc is region-free, but there are no Extra Features at all.