Unjustly forgotten, Number One (1969) had been a virtually lost Charlton Heston movie, a football drama and character study, a pet project the iconic actor obsessed over for several years, made near the height of his fame. In the end, like his later Antony and Cleopatra (1972), he essentially produced it himself (through his agent, Walter Seltzer), for release through United Artists. Though released decades ago on VHS, there was never a laserdisc version and no official DVD release until late 2015.

Heston, of course, was one of the biggest stars of the 1950s and ‘60s, first playing larger than life biblical and historical figures in The Ten Commandments (1956), Ben-Hur (1959), El Cid (1961), and The Agony and the Ecstasy (1965), etc., then later headlining cynical science fiction and disaster films such as Planet of the Apes (1968), Soylent Green (1973), Earthquake, and Airport 1975 (both 1974). The obscurity of Number One is all the more puzzling considering that it was directed by Tom Gries, who also helmed Heston's excellent, likewise underrated Western Will Penny (1968), as well as other high-profile films starring Burt Reynolds and Charles Bronson, along with the mini-series Helter Skelter (1976) before his untimely death in 1977.

If Heston fans thought he had it rough on the Planet of the Apes they should see this searing portrait of an aging NFL quarterback at the end of his career. The picture wasn't a financial success, no doubt partly because Heston's role, Ron "Cat" Catlan, is an unlikeable, self-loathing lout, one of his darkest-ever characters. 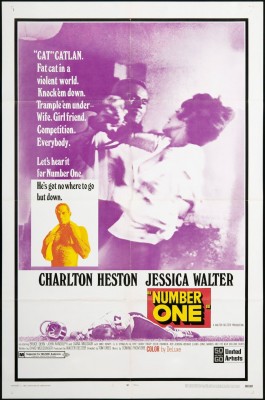 You know your picture's in trouble when the distributor won't spring for full-color ad art, and particularly ugly ad art at that.

Once one of the greatest quarterbacks the game of football had ever seen, Ron "Cat" Catlan (Heston) is, at the age of 40, washed up, at least based on his performance during the New Orleans Saints' pre-season match-ups. Rumors spread in the press and the locker room that Cat is about to retire, something he's reluctant to even consider.

He's childless and unhappily married to Julie (Jessica Walter), who loves him but can't reconcile his stubbornness, misanthropy, and selfish behavior. Instead, she fuels her energy running a modest fashion label. Catlan, in turn, has an affair with tennis goods store owner Ann (Diana Muldaur), whom he meets at a party hosted by Richie Fowler (Bruce Dern), a former teammate from Catlan's glory days. The much younger Richie retired at 34 to start a successful car-leasing empire that trades on his fame and Richie himself seems content, but for Catlan playing football utterly defines his existence.

Catlan mulls a sincerely made management-spokesperson offer from Harvey Hess (Bobby Troup, surprisingly good) at a high-tech computer company, but Catlan is noncommittal. Hess cautions him, "There are a lot of kids coming out of college, Cat, and they're smart kids. It's frightening. A year from now, I might not be able to offer you a job driving the company truck." In the Saints parking lot Catlan bumps into another retired player, Roy Nelson (Roy Jenson), a former lineman, who's bad off financially and, almost with tears in his eyes, talks about still missing the game, further unnerving Catlan. (Criminally, Jenson's fine performance goes unbilled.)

The clock ticking down to the start of the regular season, the pressure is on for Catlan to either retire gracefully or, as Saints coach Southerd (John Randolph) suggests, aim for a few more "good seasons" before Catlan's body gives out entirely.

Number One is more an internalized character study than a conventional sports movie, getting inside the head of this unhappy, self-destructive NFL star. The movie frequently shifts around in time; Catlan's mind often wanders in the middle of conversations, triggering flashbacks, and the movie audience likewise experiences his dreams.

As football defines Catlan's identity and self-worth (he doesn't care about the fame or the money particularly), he's naturally bitter about the sport's mercilessness when it comes to aging players, manipulative owners (who always have the upper-hand in negotiations) and the fickleness of its fans. In one of the film's best scenes, Catlan and Ann are pulled over by a motorcycle cop for speeding ("Ditch the beer!" cries Catlan, tossing an open beer can from Ann's convertible). "You look like a man who enjoys football," Catlan unsubtly tells the officer, who recognizes him immediately. The quarterback bribes the cop with a couple of 50-yard-line tickets and he lets them off. Catlan, intriguingly, is disgusted that the cop could be bought so effortlessly but not, perhaps, by his own, equally unethical behavior. Indeed, throughout the story he insists others follow a code of behavior that does not apply to him, even on the football field.

He's been playing the game nearly all his life and not ready to give it up but it's ready to give up on him. For years he's ignored his wife, pointedly complaining that she never comes to his games anymore, and she's understandably moved on to other interests. Clearly Heston, who conceived the entire project based on a famous photograph of Y.A. Tittle taken moments after a play that signaled the end of his career, could identify with the aging footballer.

Forty-five years old at the time, Heston already had, career-wise, outlasted most of his contemporaries in a business as heartless and unforgiving as the NFL. As Catlan he's emotionally aloof (also like the real Heston sometimes was), introspective, self-involved, and extremely unhappy. Especially in projects where he could influence the writing of his characters, Heston seemed to avoid playing parts showing emotional vulnerability and weakness, preferring cocky, pig-headed types like Michelangelo or Astronaut Taylor. He could express awkwardness when blindsided by feeling but helplessness and emotional negotiating were not part of his acting vocabulary.

This may account for why Catlan comes off like a jerk (and a square) throughout Number One. For the movie audience, Catlan is an interesting but thoroughly unlikeable character with almost no redeeming qualities, and that in turn hurt the movie's commercial prospects even further. Had Catlan reached out to wife for emotional support, of if he'd been able to honestly express his worst fears to anyone, it might have made an even more powerful picture, but it's easy to imagine Heston vetoing such ideas.

Some argue the actor was too old and physically inapt to make a convincing quarterback, but the game was very different in 1969, when the average player made just $25,000/year (today's star quarterbacks earn $10-35 million). As for Heston's age, George Blanda played a championship game at age 43, and continued in the NFL until he was 48. Heston was tall (6'3") and, for the film, a lean 200 lbs. or so. His hair, cut short, made him appear a few years younger, and though athletic - he was an avid tennis player - in the movie there's maybe a single shot showing him actually completing a pass.

United Artists had little faith in the film, allotting it a budget of just $1.1 million, making Heston's last film of the 1960s also by far his cheapest. The budget is just enough to make the picture work, though it clearly skimps here and there, such as the casting of primarily TV talent. The lighting is often unsubtle and too harsh, and the camerawork is dodgy, with lots of handheld shots and other TV-like cost-cutting.

Walter played a not-dissimilar role in John Frankenheimer's Grand Prix (1966), and like that film Gries uses a lot of split-screen techniques the earlier picture all but invented, as well as a similar use of flashbacks, flash-forwards, and other narrative interrupters, but never does it approach Grand Prix's slick effectiveness. The acting is fine all around, particularly Randolph's coach, so integrated with the film's mix of actors playing footballers and real footballers playing themselves one can imagine the movie audience mistaking Randolph for a real coach trying his hand at acting, rather than the other way around. Dern, still barely getting by as an actor at this point, also comes off well, his relaxed, youthful gregariousness a striking contrast to Heston's humorless pro.

A Scorpion release through Kino, Number One utilizes an older transfer that improves markedly upon the 2015 DVD. The 1.85:1 widescreen image has a fair amount of inherent grain but is sharp with accurate color. The DTS-HD Master Audio (mono) is acceptable. Region "A" encoded. The lone Extra Feature is a trailer.

The movie is in some ways more dated than Heston's famous movies. Watching Bobby Troup explain how his computer system works is almost quaint, and a couple of scenes with Walter's gay assistant (Steve Franken) are rather embarrassing ("You disgust me!" growls Catlan.) But Heston's performance as a nationally famous but unhappy, disagreeable football star is one of his most underrated, and the film is really worthwhile. Highly Recommended.