If someone held a gun to my head and forced me to pick the greatest film comedy of all-time, that film would likely be W.C. Fields's hilarious It's a Gift (1934).

Uniquely funny, Fields had not one but two distinct personae, though with some overlap: playing a third-rate grifter, as in You Can't Cheat an Honest Man (1939) and My Little Chickadee; and as a henpecked family man, trying to make good in a hostile home environment, usually in a small, working-class town populated by unpleasant, gossipy and judgmental types when they're not self-centered nitwits. In most people's minds, the former screen character came to dominate public consciousness of Fields, especially after renewed interest in Fields's comedies from the late-1960s into the ‘70s and when an iconic image of Fields (from My Little Chickadee) turned up in posters that teenagers hung in their bedrooms, TV variety shows offered skits with entertainers impersonating him, and when even a cartoon version of Fields turned up in a series of TV commercials hawking Fritos corn chips.

But it's really as the henpecked husband where Fields struck comedy gold. His cynical take on family and small-town life was uniquely funny and even taboo-breaking. In a Hollywood populated by Shirley Temple-esque good-doers, children, especially toddlers, in Fields comedies were obnoxious brats, their mothers irresponsible child-rearers, and even blind men were cranky creatures of destruction. Just 68 minutes long, It's a Gift is stripped of nothing but comic high points. 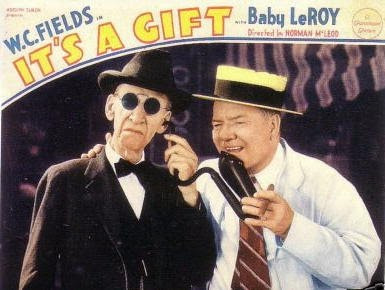 Eventually the family makes the long journey cross-country in their delipidated sedan, eventually reaching the emaciated, desert-like plot of land. But lo, a friendly neighbor informs Harold that a developer needs Harold's worthless property to build the grandstand for a race track track, the friendly neighbor urging Harold to "hold out for any price."

Thin as its plot is, It's a Gift exquisitely weaves into it one side-splitting comic set piece after another: Harold's grocery store struggles with Mr. Muckle (Charles Sellon), the cranky, cane-wielding blind man, as well as mischievous Baby Dunk (Baby LeRoy), who unleashes a keg full of molasses all over the floor, and irate Jasper Fitchmueller, whose increasingly exasperated order for ten pounds of kumquats goes unheeded; the superlative, expertly-paced "porch scene," with an exhausted Harold endlessly thwarted in his attempts to sleep on a back patio, menaced again by Baby Dunk, a wayward cocoanut, noisy neighbors, and an indefatigable insurance salesman (T. Roy Barnes) looking for a Carl LaFong ("That's LaFong! Capital "L," small "a," capital "F," small "o," small "n," small "g." LaFong! Carl LaFong!"); and a hysterical sequence when the family mistake the grounds of a rich man's estate with a public park, where they proceed to trash everything in sight. (Striking a statue of the Venus de Milo with his car, Harold replies, "She ran right out in front of me!")

Best of all is the truthfulness of Fields's comedy, venturing where few dare to tread. This is exemplified in the moments just prior to the porch scene when, at 4:30 A.M., Harold tries to sleep as his wife drones on endlessly about her many hardships, all Harold's fault. A ringing telephone interrupts this, a wrong number by a caller trying to reach the maternity hospital.

The beauty of this sequence is the way Fields perfectly captures, hilariously, the kind of complete breakdown of communication and understanding between married couples. Later, when poor Harold is all but assaulted by the aggressive insurance salesman who refuses to take Harold's direct "No!" for an answer, an annoyed Amelia wanders out, complaining, "Harold, if you and your friend wish to exchange ribald stories..."

The entire picture offers this kind of humor, almost non-existent in other ‘30s comedies and only very rarely since. (Oddly enough, Albert Brooks, in his best films, is a practitioner.) There are passive-aggressive neighbors, completely inept employees, etc. And yet, It's a Gift has moments when Harold can get away from the family long enough to actually enjoy life, such as his genuinely sweet encounter with friendly fellow campers. I give Fields's best Paramount films a slight edge over his later starring vehicles for Universal because of moments like these, and because, rather than slapstick chase climax model of the Universals, the best Paramounts end with Fields serenely triumphant, his characters finally rich and successful, the family sent off on some shopping expedition so that, tall glass of gin in hand, Fields can at long last enjoy a bit of uninterrupted solitude.

Unlike Kino's simultaneously release of The Old Fashioned Way, their Blu-ray of It's a Gift looks just about perfect, the 1.37:1 standard, black-and-white image looking almost brand-new. The DTS-HD Master Audio mono is also excellent, and supported by optional English subtitles on this Region "A" encoded disc.

Supplements include a trailer and new, well-researched audio commentary track by James L. Neibaur, author of The W.C. Fields Films.

One of the all-time great classic comedies, It's a Gift is a DVD Talk Collectors Series title.