I'd seen Mass Appeal (1984), the movie version of Bill C. Davis's "two-hander" Broadway play on cable in the mid-‘80s but not since. Watching Code Red's new Blu-ray, what mainly struck me was how this kind of sincere, mid-level, studio-financed prestige picture is all but extinct now. Movies of this type, formerly a staple of major studio output, are now produced by indie companies fighting for what crumbs are left distribution-wise. Back in 1984, a picture like Mass Appeal would play mainstream movie theaters across the country. Not anymore.

The movie is pretty much as I had remembered it: pleasant but unmemorable, well-made but not outstanding, featuring a couple of good performances let down slightly by casting that doesn't entirely work and a script that, while pretty ambitious, especially for its time, is unfocused and never quite achieves maximum impact. 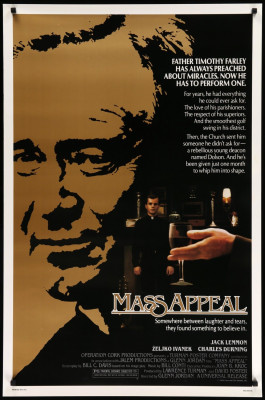 The play, directed by Geraldine Fitzgerald, starred Milo O'Shea as Father Tim Farley and Eric Roberts (later Michael O'Keefe) as incendiary seminary deacon Mark Dolson. Later, in London, it was restaged with Gordon Jackson and Rupert Everett. The movie stars Jack Lemmon as Father Tim, popular with his large, upper middle-class parish in suburban Connecticut. As the movie opens, seminarian Mark Dolson (Željko Ivanek) disrupts the service questioning the Church's position on the ordination of women. Some of the women in the parish (including Gloria Stuart) are impressed by Dolson, but most find him merely annoying.

Later, Farley becomes ensnared in a move by Monsignor Thomas Burke (Charles Durning) to oust two seminarians suspected of engaging in a homosexual relationship. When Dolson bursts into the monsignor's office to defend the two young men, the monsignor assigns Dolson to Farley's parish in hope that his ingratiating approach will dull Dolson's abrasive qualities. However, Dolson doesn't care for Farley's "song and dance" style of preaching, either, resisting all of Farley's efforts to teach him. The monsignor, meanwhile, quietly plans to expel Dolson as well, by accusing him of being a homosexual. And, as luck would have it, the monsignor is partly correct: Dolson did engage in bisexual affairs in his past, but is also committed to the church and to a life of celibacy. But can he survive the monsignor's accusations and Farley's attempts to teach him?

Mass Appeal commendably addresses issues such as homosexuality in the Catholic church, shocking subject matter in 1984 more than now, but does so in such a mild, almost wishy-washy way that it doesn't make much impact. The obvious main intentions of Mass Appeal are that, on one hand you have a firebrand seminarian Farley gradually recognizes as, potentially, a truly great priest if he can only learn to control his self-destructive qualities; Farley, on the other hand, for all his local celebrity, slowly realizes that in his pathological need to be loved by his parish he's doing them no favors entertaining but never really teaching God's gospel out of fear of offending them.

In the movie both characters don't quite work. Dolson is too emphatically radical. Late in the story Farley finally gets Dolson to calm down long enough to understand that the young man genuinely and unconditionally loves the people of the parish in a way that only a great priest can; he just doesn't know how to channel that passion into receptive preaching. The character of Farley, meanwhile, is both helped and hurt by Jack Lemmon's performance, he playing a very Jack Lemmony character that's hard to dislike. When it dawns on the movie audience that Mass Appeal is as much about Farley as Dolson it comes as something of a surprise because Farley's great failings over the past 10 years are filtered through Lemmon's breezy persona. It's much easier to imagine Milo O'Shea pulling off this combination of charm and also fear-driven emotional distancing. One can see O'Shea as Farley coaching Dolson about delivering a service with a kind of Barry Fitzgeraldian Irish charm while also having a darker side discernable throughout the story. Lemmon plays Farley like he's a veteran Hollywood actor giving lessons to a Brando-esque method actor.

Maybe some of the meat of Davis's play was lost when opened-up his two-man play for the screen. None of the supporting players add much, certainly not Durning's obvious antagonist monsignor.

Licensed from Universal, Mass Appeal is presented in 1.85:1 widescreen, the image sharp with accurate color. The audio, DTS-HD Master Audio mono, and supported by optional English subtitles, is more than acceptable. Region "A" encoded.

A trailer is the lone supplement.

Again, not particularly good but not bad, either. Not a waste of time but not a film you'll want to revisit anytime soon. Maybe in another 35 years or so, as I did. Recommended.