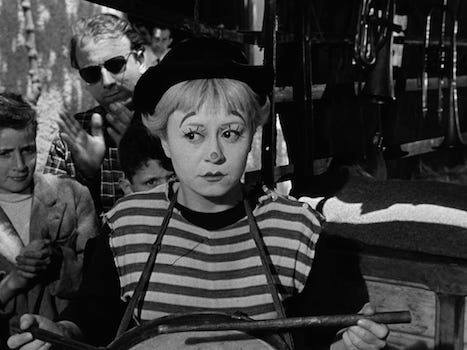 After the international splash made by I Vitelloni in 1953, Federico Fellini came back with a film seemingly designed to burnish his worldwide reputation without smoothing over his rough edges. That film, La Strada (The Road), is arguably his first masterpiece. The achievement is helped in no small part by the uniquely tragicomic lead performance by Fellini's then-wife Giulietta Masina.

Masina plays Gelsomina, a slow-witted girl who is sold by her poor mother to traveling sideshow strongman Zampanò (Anthony Quinn) as an assistant. Zampanò had previously taken on Gelsomina's older sister as his assistant, but she died -- a portentous set-up for Gelsomina's journey ahead. For her part, Gelsomina is sad to leave her family but she is excited to see the world.

Zampanò proves to be a brutal boss, literally swatting Gelsomina's legs to get the simple girl to enact his low-rent theatrics. Zampanò's act involves hooking a chain around his chest, then expanding his chest to bust the hook. It's not the most impressive feat the first time around, and we see it many times throughout the film. But it's enough of a show that Zampanò makes money to live on and push his rickety motorcycle-driven wagon to the next town.

Zampanò also isn't much of a friend to Gelsomina. He abandons her to shack up with any willing female within spitting distance. Despite this, Gelsomina's attachment to and affection for Zampanò remains a consistent undercurrent of their relationship. When outsiders encourage Gelsomina to abandon the lout, she worries about how he would make it without her.

During a brief stint working for a circus, Zampanò runs into an old nemesis, an acrobat known as The Fool (Fixed Bayonets!'s Richard Basehart). Gelsomina becomes enamored of The Fool's high-wire act -- and the man too, even though he teases her almost as much as he teases Zampanò. Zampanò becomes jealous, even though he isn't able to admit he has an emotional investment in Gelsomina. It's like the Fool is trespassing on his private property.

The inevitable tragedies that the film sets up come to pass, but Fellini folds in a few delicate grace notes that suggest artistic and spiritual redemption for his characters (even if they remain otherwise doomed on Earth). In his supplemental interview, Martin Scorsese talks about how he is frequently making films about his own "Zampanò"s, with Jake LaMotta in Raging Bull as the most obvious example. In a way, Scorsese's often more brutal depictions of arrested, toxic men are a little easier to take than La Strada because his men are placed at the center of the film to be held up for scrutiny and examination. La Strada instead gives us Zampanò mostly through Gelsomina's eyes. We feel all of his actions through through her hurt and trauma.

It's tricky. Giulietta Masina's performance is both why this viewer is drawn in and repelled by La Strada with equal strength. Masina's open, expressive face and off-kilter beauty has drawn comparisons to the silent-movie pathos of Charlie Chaplin yet I can't help but see the childlike impishness of Harpo Marx. Gelsomina is a total innocent, while Harpo is a con man, but the sweetness is much the same. We want good things for Gelsomina, but she is no match for the unforgiving world into which she has been placed. Every hurt almost destroys her -- and, by extension, us.

Anthony Quinn and Richard Basehart were cast to provide some Hollywood star power, but they fit into the down-and-dirty world of La Strada easily. Both deliver much more guarded performances than Masina, but they know where to let their masks slip, so to speak.

As far as personal tastes go, I prefer the fantastical Fellini to the street-level version of him. Because of that, La Strada is a film I respect and admire far more than I love. It's arguably a flawless film, but I'd rather see Marcello Mastroianni float into the atmosphere before crashing to earth in 8 1/2. 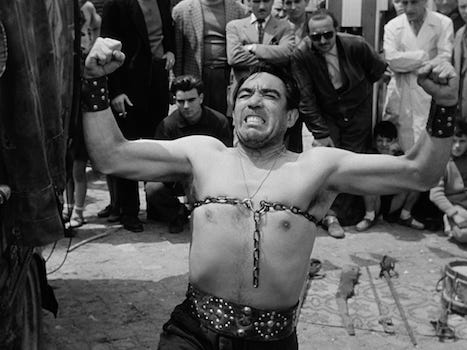 The Blu-ray
La Strada is packaged with a fold-out featuring an essay by Christina Newland.

The Video:
Sourced from a 4K restoration, this AVC-encoded 1080p 1.37:1 transfer is stunning in its depth and clarity. There are a few short stretches with film density issues, but there are no noticeable digital encode problems. Dirt and scratches are negligible, and the film grain is well-resolved.

The Audio:
The Italian LPCM mono audio option (with optional English subtitles) is the certainly the preferred version. Although Quinn and Basehart are not speaking in their own voices, the track itself has much more depth and nuance than the lossy English Dolby mono audio option. (That one does feature Quinn and Basehart recording their own dialogue, though.) Nino Rota's musical score is brilliant and appropriately heartbreaking.

- Like the Scorsese piece and Federico Fellini's Autobiography below, this is carried over from Criterion's original DVD and was featured on the Blu-ray included in the Essential Fellini box set from last year. Bodanella looks at the film's place within the careers of the people who made as well as within Italian cinema history.


Final Thoughts:
La Strada has its place in history as the first film to win the then-newly christened Best Foreign Language Film Academy Award. It made Federico Fellini and Giulietta Masina both international stars. The film is a remarkable achievement in film storytelling that packs a serious emotional wallop. My personal prejudice is for Fellini's later work, but this one is a must-see nonetheless. The supplemental docs on Fellini and Masina are both worth a watch too. The whole package comes Highly Recommended. 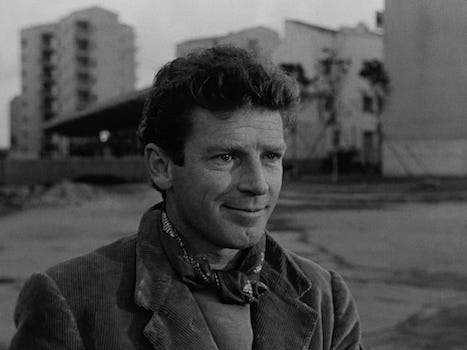