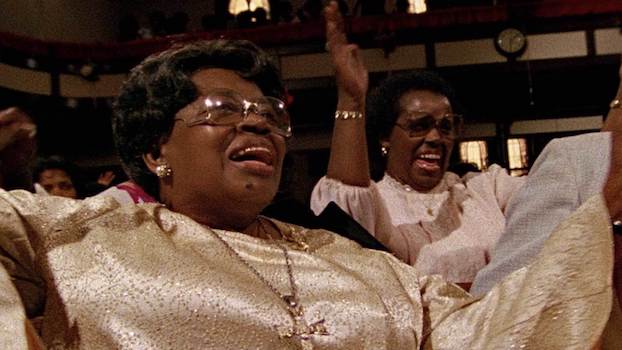 As a secular person who has never flirted with Christianity as a lifestyle choice, it might seem surprising that gospel music plays heavily into two of my favorite recent movie experiences. The decades-delayed Aretha Franklin gospel concert film Amazing Grace gave me chills all three times that I saw it in a movie theater -- and the handful of times I've seen it on video since. This past year, the most electrifying moment depicted onscreen came in Questlove's documentary about the 1969 Harlem Cultural Festival, Summer of Soul, when gospel legend Mahalia Jackson shared the microphone with a young Mavis Staples for a gloriously grandiose version of "Take My Hand, Precious Lord." The song was known to be Martin Luther King, Jr.'s favorite. With the black community still reeling from his 1968 assassination, this Harlem performance came loaded with extra meaning and emotion. Recounting the sequence now in relative silence, I can still hear their voices -- my eyes have gotten wet and a lump is growing in my throat.

I may not subscribe to a formal religious doctrine at the moment, but music has long been my religion. It's the transcendent stuff that cuts through intellectual understanding and gets to the pain and ecstasy of human life. So while I may not always know what gospel music is talking about -- I know what it's saying.

What a joy and necessity, then, to discover the newly restored 1982 documentary Say Amen, Somebody by director George T. Nierenberg. It's a portrait of the gospel music scene that focuses heavily on two of the movement's early figures, Thomas A. Dorsey and Willie Mae Ford Smith.

Dorsey, shown in his early 80s in the film, is the writer of over 3000 songs, including the previously mentioned "Take My Hand, Precious Lord." Though he is slowed by age, Dorsey's evangelical spirit continues undimmed as he recounts his life and as he continues to preach to rapt (largely elderly) audiences. He describes for Nierenberg's camera the devastating loss of his wife in childbirth and of his baby son days thereafter. The insurmountable anger and grief from these events fueled him to write and sing "Take My Hand, Precious Lord."

Late in the film, we visit a national convention for gospel choirs where Dorsey leads hundreds of singers through a rendition of "Precious Lord" that is rousing and cathartic. In this performance, we see so many of Dorsey's facets on display: his showmanship, his artistry, his authority as a spiritual leader, and his disarming eccentricity and humor.

The fact that the film is able to top this performance with a roof-raising rendition of "Canaan" for its finale speaks to the performing prowess of our other central subject, Willie Mae Ford Smith. Mother Smith, as she is called, is a gospel music lifer. She overflows with stories and advice from decades of preaching and singing, fighting against gatekeepers who opposed the "bluesy" music she sang and fighting against men who underestimated her as a woman.

Say Amen, Somebody is loosely structured around a St. Louis concert celebrating Mother Smith's sixty years in gospel music. It includes performances by Zella Jackson Price, The Barrett Sisters, and The O'Neal Twins with their Interfaith Choir.

Nierenberg includes vignettes with the performers to place them in the context of the music scene, and the two most striking of these echo Mother Smith's own battles with sexism. Zella Jackson Price asks for advice from Mother Smith in balancing the needs of her ascendant career with those of a skeptical family who feel like they are being abandoned. This same theme carries over to a breakfast scene where Delois Barrett Campbell must wrestle with her husband's concerns that she is neglecting him and their congregation to spend two weeks touring Europe with the Barrett Sisters. The tensions between fulfilling a spiritual calling and the actual job of being a musician are brilliantly encapsulated in these moments.

The second half of Say Amen, Somebody becomes more of a concert film dominated by highlights from the 60th anniversary celebration of Mother Smith. The O'Neal Twins' "Jesus Dropped the Charges" is given such a raucous and joyful reading that disbelievers might be tempted to convert.

While there is no doubt a Ken-Burns-miniseries-worth of stories to be told about the history of gospel music, Say Amen, Somebody covers a lot of a ground with its relatively modest scope. Its succinct and eloquent character portraits blend beautifully with the musical sequences, making this is a must-see for music and doc fans alike. 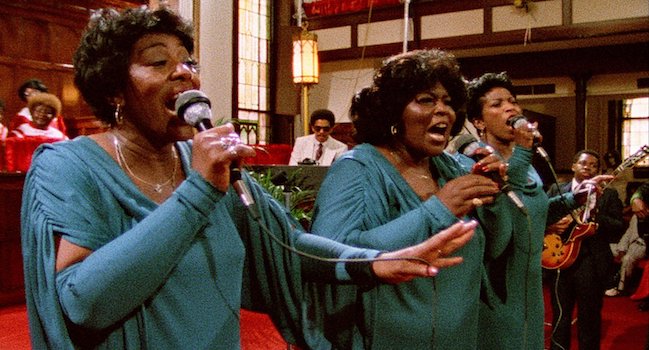 The Video:
Newly restored in 4K, this AVC-encoded 1080p 1.78:1 presentation looks outstanding. Taken from 16mm sources and reframed for HD, the restoration has the expected graininess of the format but doesn't look weirdly cropped at any moments (potentially the cinematographers were framing for 35mm 1.85 blow-up anyway). Colors are rich and lifelike and the image is generally well-detailed.

The Audio:
The soundtrack is presented in both DTS-HD MA 2.0 and DTS-HD MA 5.1 mixes. The music sequences are the ones that really get a boost from the surround mix. Nierenberg recorded the main concert with a 24-track mobile truck, as well as outfitting each camera with its own sound recorder, so the material was there to utilize. In general, the dialogue is well-recorded and mixed. The older subjects can get a little mumbly, so it's nice to have an English subtitles option. Sadly, unlike Milestone's Portrait of Jason disc, which I praised for its shockingly detailed subtitle transcription, there are a lot of glaring errors in this track. For instance, when Thomas A. Dorsey talks about working as a sideman for Ma Rainey, her name is written in the subtitles as "Maureen." What!?!

- Nierenberg's comments are often a bit broad and impressionistic, talking about the overall filmmaking experience without often delving into specific moments. He does frequently credit legendary director of photography Ed Lachman with grabbing certain shots he considers particularly expressive throughout the film.


Final Thoughts:
A capital-G Great music doc. It's nice to have it newly restored with a generous batch of extras. Perfect for a Sunday "music festival" at home, along with Amazing Grace and Summer of Soul. DVD Talk Collector Series. 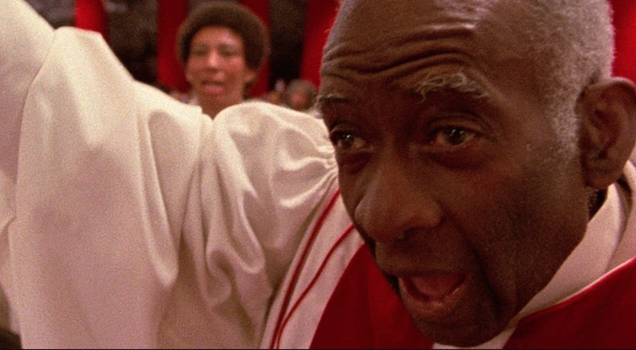