Director Ernst Lubitsch is, of course, best remembered for his many great comedies, but he also occasionally dabbled in straight drama. His comedies often had deadly serious underpinnings, as in To Be or Not To Be (1942), and Broken Lullaby, a very serious drama, has moments of grim, ironic humor. The picture is something of a revelation: it's a superb yet largely forgotten film about the human cost of war, grief, guilt, bitterness and, ultimately, forgiveness.

It's the kind of film best experienced with a suspension of modern standards of drama. The style of acting is very early-talkie, i.e., heavily influenced by the style of stage acting that existed at the dawn of sound, and the picture is sentimental in the good sense, full of the kind of uninhibited emotion modern movies are, to their loss, so emphatically averse. Viewed as 1932 audiences did, Broken Lullaby is profoundly moving. 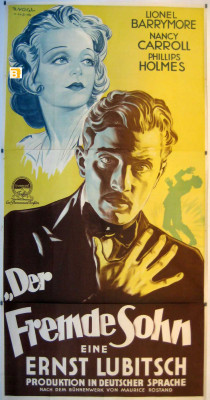 In Paris on the first anniversary of the end of World War I, the city is in a celebratory mood, but Lubitsch views this through a series of ingeniously ironic touches: the parade is glimpsed through a gap in the crowd, the space where a veteran's leg is no more, while at a veteran's hospital along the parade route, cannon fire triggers flashbacks among the shell-shocked patients that sends them screaming in their beds.

One veteran, Paul Renard (Phillips Holmes), is a former violinist who can no longer play, haunted to the point of madness at having killed at close range a German soldier, Walter Holderlin, whom Paul watched die, only to learn by going through his personal effects later that Walter, too was a musician that had studied in Paris. In desperation, Paul confesses his "murder" to a priest (Frank Sheridan) who offers him absolution, but can only advise Paul to forget it, that he was "doing his duty." Paul, incredulous, asks the priest is that all the church can offer him? (Such a statement would have been unthinkable in a Hollywood movie once the Production Code was enforced after mid-1934.)

Paul decides to travel to Germany, to confess to Walter's family that it was he who killed their son. Stopping first to place flowers on Walter's grave, an act witnessed by Walter's fiancée, Elsa (Nancy Carroll), Paul attempts to confess to Walter's physician father, Dr. Holderlin (Lionel Barrymore), bitter and vehemently anti-French since the war. However, upon learning from Elsa of Paul's visit to their son's grave, Dr. Holderlin and his wife, (Louise Carter) do a complete turnabout, welcoming Paul after more than a year of unrelieved mourning. Paul, taken aback, lies and claims to have been friends with Walter in Paris before the war.

The Holderlin family immediately embrace Paul, he filling the irreplaceable void left by Walter's death, his parents insisting he stay with them and even encouraging Paul to court Elsa. And, indeed, they do fall in love, but Paul is understandably uncomfortable with living this great lie. Adding to the tension, gossipy villagers condemn the Holderlins for welcoming a Frenchman into their home, effectively taking Paul's place, especially Walter Schultz (Lucien Littlefield), who covets Elsa and Walter's position within the community.

I was surprised by modern reviews of Broken Lullaby, most of which damn the film with faint praise. They acknowledge Lubitsch's directorial skill but are put off by its emotion (Pauline Kael called it "drab, sentimental hokum") and especially the performances of Holmes (overwrought) and Carroll (miscast). None of this bothered me at all. Holmes is certainly intense but given the extremities of his wartime experience, the burden of guilt he carries, and the deception upon which he builds his relationships with Elsa and Walter's parents, this intensity would seem entirely reasonable. Mostly his acting is spot-on.

The grief and guilt felt in Broken Lullaby runs deep -- and why wouldn't it? The elderly Holderlins have lost their only son, and Paul's unexpected appearance almost instantly fills this cavernous void. Lionel Barrymore is very good but Louise Carter has one of those great movie faces that expresses so much: the toll the loss of her son has taken and the solace Paul offers is right there in her eyes. (It's hard to believe she's the same actress who played W.C. Fields's shrewish wife in You're Telling Me! just two years later.) The movie has been described as "antiwar," but at its core is this idea that if living a lie can, in some small way, set the universe right again, at least for four desperately unhappy people, then maybe deception is a viable solution, a real-world problem-solver that all the religious faith in the world isn't going to fix.

The film has a remarkable payoff at the end, with Elsa pleading with Paul not to scurry back to Paris, his tail between his legs, before the truth comes out about his true relationship with Walter. Reluctantly he stays, Dr. Holderlin presenting Paul with Walter's prized violin for him to play. Oh-oh, thinks Elsa, now the ruse will be discovered, she not realizing that the one truth Paul told amidst all the lies is that he really is an accomplished violinist. When he starts playing, the elderly Holderlins firmly cement their bond with Paul, while Elsa, in love with him despite everything is astonished. The Lubitsch touch, indeed.

A Paramount production licensed from Universal, Broken Lullaby is presented in its original black-and-white, standard 1.37:1 screen shape. The image, derived from a new 2K restoration, is very good, though not quite great, presumably sourced from something other than an original nitrate camera negative. The DTS-HD Master Audio mono, supported by optional English subtitles, is more than acceptable. Region "A" encoded.

The lone supplement is an exceptionally insightful audio commentary track by Joseph McBride, author of How Did Lubitsch Do It?. McBride's tracks are among the very best being offered these days, and this one is definitely enlightening and interesting throughout.