You win some, you lose some. When Kino simultaneously released two wannabe classic Universal Horror films, The Secret of the Blue Room (1933) and The Mystery of Edwin Drood (1935) I watched and reviewed the former first, delighted to discover this modest thriller, the lowest-budgeted feature on Universal's slate that year, was in fact pretty nifty, a cracklin' good mystery film with very slight horror elements, buttressed by an excellent cast.

The Mystery of Edwin Drood, on the other hand, was quite expensive ($215,000) for the then-undernourished Universal. (By way of comparison, The Raven, made that same year, cost half that amount, even with Karloff and Lugosi headlining the cast.) Universal and director Stuart Walker were coming off another Charles Dickens adaptation, Great Expectations (1934), which like Drood, also flopped. Both films seem to have been made to cash in on the publicity surrounding MGM's all-star David Copperfield, released after Universal's Great Expectations but before Drood. That film had big money behind it, just over $1 million, which made Universal's Drood look cheap by comparison, even though the company augmented its backlot (near its Notre Dame set) just for this production.

Quite unlike Mystery of the Blue Room, The Mystery of Edwin Drood is not entertaining. Indeed, it's a real slog getting through it. Almost embarrassingly vying for respectability, it tries too hard to look classy, instead coming off stiff and forced. The period flavor it strives for seems archly artificial, and the acting is all over the map: English actors speaking with English accents, American actors mostly speaking with American accents with a few godawful attempts at cockney and other, indescribable accents. 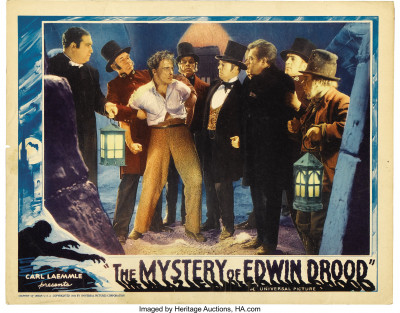 The film adapts Charles Dickens's unfinished novel. As he had done before, it was originally published in multiple installments over many months. Dickens had planned 12 installments for Drood, but he died in June 1870 after finishing only the first six. The story partly revolves around Drood's disappearance and possible murder, resulting in much speculation through the decades about the identity of his assailant, though it is widely assumed, based on solid evidence, that Dickens from the beginning had intended a leading character named Jasper to be Drood's killer.

Into this mix arrive yet more orphans: part Ceylonese twins Neville (Douglass Montgomery) and Helena Landless (Valerie Hobson). Neville is immediately smitten with Rosa as well, and she with him, which is fine with both her and Edwin as they recognize they're more like brother and sister than husband and wife, calling off their impending wedding. Jasper, however, takes an immediate dislike to Neville, and since he's unaware that Edwin and Rosa have recently called it quits, plots to get rid of both men.

The Mystery of Edwin Drood is completely lacking the flavor of the best Dickens adaptations, even the Hollywood-ized MGM David Copperfield. This is perhaps best exemplified by the Rev. Mister Crisparkle, played by fat British character actor Francis L. Sullivan. He played Mr. Jaggers, the lawyer overseeing young Pip's mysterious but bountiful allowance in Walker's earlier Great Expectations. I've not seen that film version, but Sullivan again played Jaggers in David Lean's 1945 version, one of the greatest films of all-time. Sullivan in that film, like a dozen or more other characters, is unforgettably realized, a marvelously droll characterization. In Drood, Sullivan has one almost good scene with Neville following a quarrel with Drood, but otherwise Crisparkle is merely fat and properly moral, a two-dimensional character.

Karloff, as one might have suspected, was the first actor approached to play Jasper; given Karloff's desire to expand his repertoire, it's surprising he didn't accept. Instead the part went to Claude Rains, to complete a two-picture deal with Universal. Best playing cool-under-pressure sinister or morally ambiguous types, his lovesick choirmaster isn't exactly outside his range, but the character's rash, emotions-driven behavior isn't a good fit, especially with the sometimes-horrible dialogue given him. Declaring his passion for Rosa, held in check for many years, he bursts out with "I love you! I love you! I love you!" an unintentionally hilarious moment uncannily similar to one in Singin' in the Rain parodying early talkie melodrama.

Heather Angel is surprisingly good as Rosa, though David Manners, in his last film role, is monotonous as Drood. Douglass Montgomery, who resembles Hurd Hatfield in this, is okay as Neville, though the audience is asked to believe, later in the story, that the accused murderer on the run could convincingly disguise himself as an old man wearing professional-grade old man makeup probably applied by an uncredited Jack Pierce, a master of the art.

Predictably, Universal played up the unfinished literary source aspects, keeping their ending Top Secret (amid scads of publicity that it was a secret). Not that it mattered. The film won faint praise for Universal, the respectability of the source material and comparatively lavish production winning plaudits but not many ticket buyers. The film was later part of Screen Gems original "Shock" package of syndicated movies, headlined by true Universal horrors like Dracula and Frankenstein but also featuring pretenders like Edwin Drood and Secret of the Blue Room. Some of these, like Blue Room, are ripe for rediscovery, but The Mystery of Edwin Drood is but a fizzle.

Licensed from Universal, The Mystery of Edwin Drood looks good, not great, on Blu-ray, the black-and-white, 1.37:1 standard screen image a notch or so below other Universal Blu-ray releases from their first cycle (1931-36) of horror movies, with close-ups coming off better than wide angle shots. The audio, DTS-HD Master Audio mono and supported by optional English subtitles, is more than acceptable. Region "A" encoded.

Of interest more to Dickens fans than classic horror movie buffs, The Mystery of Edwin Drood is unquestionably a sincere effort, by I found it plodding and flavorless. Rent It.