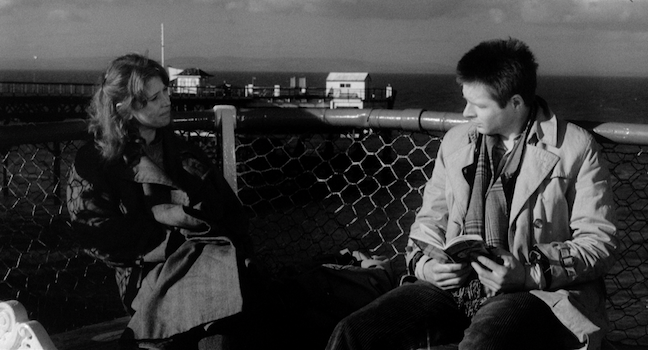 Christopher Petit's debut feature from 1979, Radio On, is a unique arthouse entity. It's an English road movie that takes its inspiration from the existential blankness of Monte Hellman's Two-Lane Blacktop and the desolate physical and emotional landscapes of Wim Wenders's road movies. (Wenders co-produced Radio On and provided some of his long-time crew members to make it.) The titular radio propels this journey with a mixture of bummed-out David Bowie tunes, chilly Kraftwerk compositions, and a smattering of spiky new wave from the cult Stiff Records label (Wreckless Eric, Ian Dury, Lene Lovich, Devo's "Satisfaction" cover).

The film's plotting is sparse and almost entirely beside the point. David Beames plays Robert, a late-night DJ on an internal radio station for a chain of snack factories that actually existed. He's hipper than the gig, which potentially explains why he is pretty depressed and aimless. He learns his brother has died, so he travels from London to Bristol to see if he can find out why. Unsurprisingly, great revelations and deeper meaning elude him. Robert's journey consists of random encounters with other alienated people and long stretches of road, scored by a few cassette tapes and the chatter of various radio presenters.

The pervasive post-industrial ennui is the star here, typified by Martin Schäfer's crisp and gloomy black-and-white cinematography. Landscapes fly past the car windows or slowly settle into grotesque compositions of "nature" and "progress" in subtle disharmony. The effect unsurprisingly resembles a photo-collage album cover -- Kraftwerk's Autobahn maybe? -- brought to life.

However, that's not to suggest that Petit neglects the humans who occupy his and Schäfer's frames. Andrew Byatt plays a Scottish hitchhiker who has decided to desert from the army after the trauma of two tours on the streets of Belfast. Byatt's deserter puts his driver -- and the viewer -- on a mini roller coaster ride in his single sequence, garnering sympathy before turning offputtingly angry and violent. Robert's later opportunities for connection are similarly doomed. Lisa Kreuzer (a regular in Wim Wenders's '70s movies and his former spouse) plays Ingrid, a woman who has come to Bristol from Germany in the hopes of regaining custody of her young daughter from her ex. (The detail that the daughter is named Alice is presumably just a tip of the cap to Kreuzer's role in Wenders's Alice in the Cities and not a suggestion that this is a spin-off in the Road Movie Cinematic Universe.) Ingrid's sadness seems like a natural foil to Robert's, but neither she nor the film offer mutual solace for the pair.

The closest Robert comes to making a connection is with a gas station attendant played by Sting. The pair bond over Eddie Cochran, who died in a car crash on the A4 after playing the Bristol Hippodrome. They sing a few lines together as the attendant strums a guitar. But even this encounter is rendered hopeless. As Robert pumps his own gas, the attendant sits in his car and pops in one of his tapes: a Kraftwerk album gifted by Robert's late brother. The attendant quickly pops it out again; Sting offers no obvious reaction but this reflexive response to the arty, potentially "posh" music is clear. As he leaves, Robert calls, "See you around, Eddie." The attendant's reply is witheringly blunt: "No, you won't."

Radio On is a film whose depressed attitude would be a real drag if it weren't so strange and beautiful. Petit has fashioned a quest film where the quest is constantly marginalized, and it works largely because of the hypnotic power of the images and music he chooses to marry. This is not an overblown music video either, as the atmosphere is defined by long stretches of eerie quiet as often as by the needle drops and radio banter. Radio On isn't quite a narrative, but it's not fully a minimalist art film either. The tension created, as these two approaches inform and subvert each other, makes for one hell of a unique viewing experience. 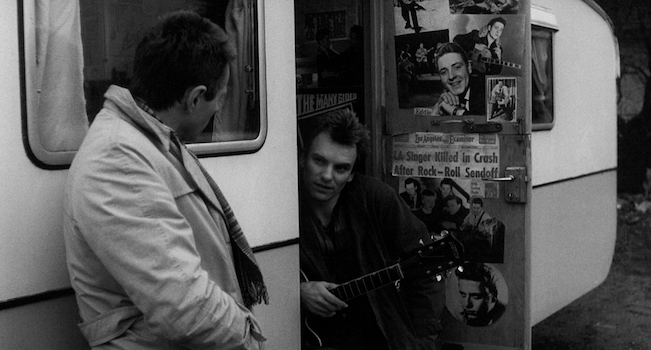 The Blu-ray
Radio On comes with two-sided cover art and a generous booklet featuring writing by Jason Wood, Ian Penman, Two-Lane Blacktop screenwriter Rudy Wurlitzer, director Chris Petit, and Glenn Kenny. Like all Fun City Editions titles so far, the initial run is offered with a limited edition slipcover on the Vinegar Syndrome site. This slipcover is particularly cool and essential, as it makes the Blu-ray look like an oversized cassette tape.

The Video:
Just gorgeous. A new 4K restoration from the original camera negative is the basis of this AVC-encoded 1080p 1.85:1 presentation, and it looks pristine. Rich blacks and crisp details. There are moments of stark light-and-dark contrast and others of hazy grayness, with plenty of subtle nuance in the shadow detail.

The Audio:
The soundtrack, which is mostly in English with certain passages in German, is offered in a DTS-HD MA 2.0 mono mix that shows meticulous sound design to evoke the loneliness of the road and to fold in the many music cues and radio clips that often reflect different diegetic circumstances. Dialogue is not always front and center, but it's usually easy to parse. Even so, there is one subtitle option: English SDH, which also includes a complete transcription of the untranslated German dialogue too. Nicely done.

- House of Psychotic Women author Janisse is a great commentator here. A smart fan and critic. She talks about all aspects of the film -- and the music -- in a way that's approachable and thorough.


Final Thoughts:
The hypnotic Radio On is thick with Thatcher-era desperation and general ennui, scored by a hip stew of '70s synthpop and new wave songs. Fun City Editions' great looking and great sounding disc burnishes this beautiful bummer of a movie. Gloom is the new glam. Highly Recommended. 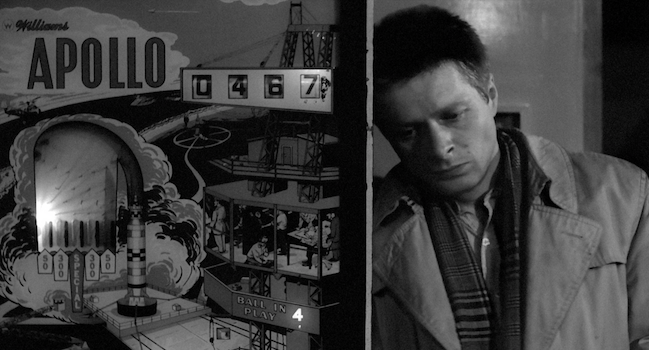