Mill of the Stone Women

I confess to not warming up to Mill of the Stone Women to the same degree as its most fervent advocates, including Glenn Erickson (aka Cinesavant) but I am certainly equally intrigued by its unusualness. The film liberally draws inspiration from earlier, sometimes much earlier horror films and yet has its own unique look. It certainly doesn't resemble other Italian or Euro-horror films from that period, nor does it much resemble Hammer's early gothics, such as Brides of Dracula, also 1960. Watching Arrow Video's outstanding and extras-packed new Blu-ray, again and again I was struck by how much the film resembled early two-color Technicolor films, especially Mystery of the Wax Museum. The plots are similar, but more significantly the use of color often has that same, not-quite-right two-color look, though I doubt very much that was a conscious emulation. 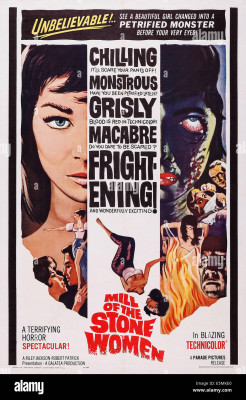 Apparently set in early 20th century Holland, Pierre Brice, soon internationally famous playing Apache Indian Winnetou in a long-running series of West German Westerns, stars as writer Hans van Arnhim, on assignment to research the Mill of the Stone Women, stone and/or wax figures on an elaborate indoor carousel powered by a windmill, on the occasion of its centennial. A descendent of the original designer, art professor and sculptor Gregorious Wahl (Herbert A.E. Böhme), welcomes Hans to the mill, providing him a private room in the attic to assemble his research. Also at the mill is Gregorious's beautiful but mysterious and seriously ill daughter, Elfie (Scilla Gabel), and live-in physician Dr. Loren Bohlem (Wolfgang Preiss), hired by Gregorious to look after Elfie's precarious health.

Hans is already dating Liselotte (Dany Carrel), a pretty art student of Gregorious's, but Hans quickly falls under Elfie's spell, she becoming so jealous upon learning of Han's concurrent relationship with Liselotte that she threatens to kill him. Gregorious, for his part, warns Hans to stay away from his daughter due to her life-threatening condition, but during a later meeting with Elfie she apparently dies in Hans's arms. That, however, is just the beginning of the story.

(Spoilers) The second half of Mill of the Stone Women is more conventional and derivative, narrative-wise, basically a variation of Mystery of the Wax Museum and its more famous (and 3-D) remake with Vincent Price, House of Wax (1953), though curiously this seems far more inspired by the older film, with nothing in it I noticed particular to the remake. The picture draws plot elements, characters, and other elements from many films: Theodor Dryer's Vampyr, both Wax Museum and, from the same studio, Doctor X; visually, Gregorious resembles both Rotwang the inventor in Fritz Lang's Metropolis as well as Dr. Mabuse. And, of course, the entire plot of a mad scientist trying to rejuvenate/bring back to life a beloved wife or daughter had driven the plots of myriad Bela Lugosi cheapies and revived with sci-fi twists a decade later in movies like She Demons (1958).

Yet, somehow, Mill of the Stone Women manages to stir all these familiar ingredients into something that doesn't quite resemble anything else. The unusual Holland locations are part of the reason, but apparently all the interiors were shot in Rome, on soundstage sets more elaborate than the Euro-horror films to come. The strong emphasis of bright, expressionistic use of primary greens with yellows, browns, and reds but almost no blues for much of the lighting has, almost exactly, the look of two-color Technicolor, which couldn't produce solid blues (they came out more like silver) and so they went to town with greens, reds, yellows, and browns. Could this have been intentional? I doubt it, but that's what it kept reminding me of.

The film had a decent budget of 180 million lire (about USD $250,000) and a generous six-week shooting schedule, and apparently did even better at the box office than Bava's more seminal Black Sunday.

Arrow's two-disc limited edition goes all-out, with four different versions of the film, derived primarily from a 2K restoration of the original camera negative: the original Italian and French versions (containing exclusive footage), both supported by English subtitles; the original English-language export cut, and the somewhat different U.S. release version, with different dubbing and altered/rearranged scenes and added visual effects, with running times varying between 90-96 minutes. The 1.66:1 widescreen presentation is excellent, as good as the best video transfers of Hammer horrors from the same period. The lossless mono audio is also excellent, as are the English subtitles on these region "A" discs.

The discs include an excellent new audio commentary by Tim Lucas, a visual essay by Kat Ellinger; archival interviews with Liana Orfei and film historian Fabio Melelli, and another with Wolfgang Preiss (this one I particularly enjoyed); alternate opening titles for U.K. and German release versions, trailers and an image gallery.

While I find Mill of the Stone Women more intriguing than artful, Arrow's presentation can't be faulted, nor their exhaustive extras, featuring the participation of writers and commentators that do their research and know their stuff. All told, a DVD Talk Collectors Series title.


Stuart Galbraith IV is the Kyoto-based film historian reviewing DVDs and Blu-ray discs while he restores a 212-year-old Japanese farmhouse.rn