Seduction of Joe Tynan, The

Alan Alda was hot stuff in the late 1970s, arguably the biggest male star on American television at the time. He was not only starring on M*A*S*H (1972-83), a Top Ten show in the ratings for all but two of its eleven seasons, he was winning Emmys writing and directing episodes, as well as starring in them. Though he'd been kicking around since the 1950s (appearing in an episode of Sgt. Bilko, for instance), and in films from 1963, Alda leveraged his popularity and acclaim to segue back into feature films while M*A*S*H was still on the air. He'd eventually write, direct, and star in four movies, but before those starred and wrote but did not direct The Seduction of Joe Tynan (1979), presumably shot during the hiatus between the sixth and seventh seasons of the TV show.

Inexpensively produced ($5 million) it was a modest commercial success ($20 million) and greeted with mostly favorable reviews. Alda reportedly spent three years writing the script, and, if anything, it's too ambitious, with enough material for three distinct movies. Directed by Jerry Schatzberg (The Panic in Needle Park, Honeysuckle Rose), the movie is intelligent and adult, exhibiting much the same promise Alda had shown as a frequent writer on M*A*S*H. 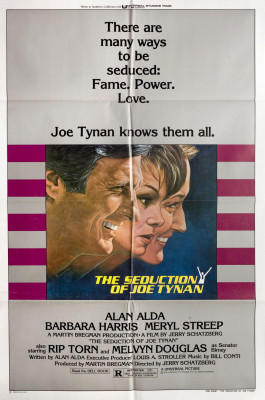 Tynan is approached by elderly Senator Birney (Melvyn Douglas) -- he seems to be the Senate Majority Leader, though it's not specified -- pressing Tynan not to lead an opposition against the President's controversial nominee for Supreme Court Justice, Edward Anderson, a moderate who long ago advocated segregation. Birney anticipates Tynan might break away from the party and use a vocal opposition to not only kill the nominee but launch a presidential campaign.

NAACP types pressure Tynan to come out publicly against Anderson, hiring politically savvy labor attorney Karen Traynor (Meryl Streep) to persuade him. Tynan insists on evidence, and she convinces him to travel to Louisiana where a young, black female politician, concerned for her own political career, has buried a damning kinescope of Anderson at a rally stating that he will always favor segregation. During their time together, Tynan and Traynor have an affair.

Coming out against Anderson, Tynan's handlers, especially Francis (Charles Kimbrough) seize upon Tynan's newfound national exposure, lobbying successfully for Tynan to deliver the big nominating speech at the upcoming Democratic National Convention, but Ellie, sensing Tynan's infidelity and troubled by her husband's inattention to their children, threatens to bring everything down in flames.

Alda's script has three balls in the air in The Seduction of Joe Tynan which he juggles with reasonable success. There's the political fight and jockeying about the Supreme Court nominee; Tynan's affair with Traynor, in which political power becomes an unexpected aphrodisiac; and the portrait of Tynan's family, they all suffering greatly because of his endless commitments and often selfish ambitions. In this, the best of Alda's feature film screenplays, all these elements are intelligently done.

Regarding the stress Tynan's career places on his marriage and family, it's pretty obvious Alda was channeling his own life as the star (and sometimes writer-director) of a weekly television show. Nowadays almost all TV comedy-drama is ensemble-driven, and the number of episodes produced in a typical season greatly reduced. But from the 1950s through at the least the ‘80s carrying a show on one's shoulders as Alda did seemed to all but guarantee divorce and other family problems. Maybe because over time M*A*S*H evolved into a quasi-ensemble series itself, Alda's marriage survived. (He's been married to wife Arlene nearly 65 years), but one imagines Alda still putting in 80-hour weeks during most of the 1970s.

Tynan's singlemindedness about his career and political passion becoming a sexual turn-on is surprisingly believable here. In bed with Ellie he can't stop talking about politics even when they make love, yet she barely puts up with it, while Joe and Karen are very much on the same wavelength sexually. The political side of the film is quite realistic, and Alda, again drawing from experience, handles his public figure status with admirers on the street and in engaging with reporters with a believability rare in American film.

Alda also lucked out with a great supporting cast. The great Barbara Harris was sadly fading as a major ‘70s actress this was her last leading role in a feature film while Meryl Streep was on the rise, appearing in this and The Deer Hunter and Kramer vs. Kramer all in the same year. Melvyn Douglas, suddenly prolific in films just before his death, is in fine form here, his character showing the weird effects of a stroke, and Rip Torn is well cast as a salacious southern senator.

Supplements are limited to an audio commentary track by journalist and writer Bryan Reesman, a trailer and radio spots. Too bad they couldn't get Alda for this; I don't recall him offering commentaries for any of his feature films, a shame.

Not great but solidly good, The Seduction of Joe Tynan is one of those semi-forgotten late-‘70s films worthy of reexamination. Recommended.