Abbott and Costello Show - Season 1, The

During the early 1950s, the comedy team of Bud Abbott and Lou Costello was just about inescapable. Although their long-running radio series had ended in 1949, they were still cranking out movies: two in 1951 and three more in 1952. Moreover, during 1950-53 no less than nine of their earlier glories were theatrically reissued. If you lived in a large American city, chances were that an Abbott & Costello movie was playing somewhere nearby.

But, in the movies, the team had grown stale. The freshness they exhibited in their earliest films, such as Buck Privates and Hold That Ghost, was long gone. In their more recent work, pictures like Comin' Round the Mountain (1951) and Lost in Alaska (1952), they seemed tired and dispirited and their studio, Universal-International by this time, almost seemed embarrassed by their continuing popularity. The tragic death of Lou's infant son in a 1943 drowning accident subtly altered his screen personality into something of a sad clown, a characterization much more childlike than he'd been before. The demographics of their ticket buyers had also changed; their early movies appealed to general audiences of all ages, but by the 1950s their primary audience were the children that never abandoned them. But ticket prices for kids were a fraction of what they were for adults, so while attendance of these later films remained impressive, revenues for the movies went into steady decline.

But then came television. The Colgate Comedy Hour was a variety series airing on NBC and broadcast live with a studio audience. Different comedians hosted the series on a rotation basis, including Eddie Cantor and (Dean) Martin & (Jerry) Lewis. Abbott & Costello, joining this quasi-"wheel" show, were a sensation. Feeding off the live, in-studio audience, the series presented the team at their ad-libbing best and suddenly they were reaching a much wider, more general audience once again.

Emboldened by this renewed interest in the team, The Abbott and Costello Show was born. It was photographed in 35mm, and showcased their talents far better than their recent films. Unencumbered by the trite romantic subplots and musical interludes of their studio-made features, each episode was 30 minutes of pure comedy. Produced by Lou's company, the series was a family affair: brother Pat was executive producer while Lou's brother-in-law Joe Kirk (married to Lou's sister) played Bud & Lou's neighbor, fruit vendor Mr. Bacciagalupe. Many of the team's old Burlesque cronies appeared, notably writer-performer Sid Fields. In this cozy environment Abbott & Costello, like their Colgate Comedy Hour appearances, are in top form.

The folks at 3-D Film Archive have done yet another remarkable job of restoration. I grew up watching the show on WGPR-TV, Channel 62 in Detroit. This least-watched of UHF channels ran battered 16mm syndication prints transmitted at a notoriously weak (800,000) wattage. Subsequent home video releases through the decades weren't much better, but this new Blu-ray release, drawn almost entirely from original camera negatives and high-quality audio elements, looks and sounds great, and features lots of extra features. 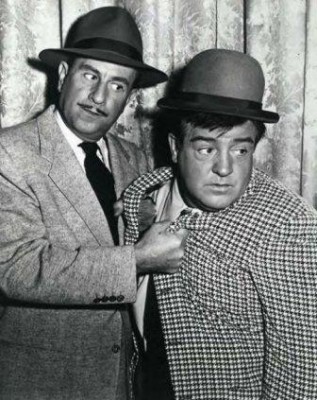 What makes The Abbott & Costello Show refreshing even 70 years after its debut is that episodes don't adhere to formula sitcom plots with stock sitcom characters. Indeed, they don't even pretend to tell much in the way of a linear story, to be realistic or even all that coherent. Pure comedy - that was the name of the game. Nearly 40 years before Seinfeld, these were truly shows about nothing.

Many episodes are practically stripped-bare remakes of their older films "Army," for instance, plays like a Buck Privates highlight reel, complete with their classic "Drill Routine" and "Dice Game" bits plus "7 x 13 = 28" thrown in for good measure. Watch "Dentist" then take a look at the trailer for their movie The Noose Hangs High (1948), included on one of the discs; the same routines and sight gags turn up in both.

Unencumbered by routine plot machinations, some shows are outright surreal. "Peace and Quiet" is a terrific episode that uniquely preserves a classic Burlesque routine, "Crazy House," all but ruined when it was attempted (and severely cut for) the movie Ride 'Em Cowboy (1942). Similarly, the team's signature bit, "Who's on First?" is done far better here (in "Actor's Home") than in the two movies in which it earlier appears (One Night in the Tropics and The Naughty Nineties).

However, for this reviewer the greatest pleasure watching these shows is its supporting cast, especially Sidney Fields, Hillary Brooke, and Joe Besser. Fields was a true unsung genius of comedy. A writer and performer, Fields (who conceived most of the series' scripts) seems to have hooked up with the team around the time of Little Giant (1946), in both films and radio. Fields in Little Giant was that picture's few bright spots, and indeed he's positively hilarious as an irate customer at Lou's filling station. On The Abbott and Costello Show Fields played apoplectic Mr. Sidney Fields, Bud & Lou's grumpy landlord, as well as myriad other characters, all supposedly Fields's various relatives.

Throughout it all Fields is just outstanding. For instance, he does a variation of his Little Giant routine in "Lou's Birthday Party," taking umbrage at every effort by Lou to be kind and considerate; he's as funny as Lou's reactions. Bud Abbott is widely and quite properly regarded as the best straight man in the business, but Fields may come in a close second, unheralded though he is. (Jerry Stiller's Frank Costanza on Seinfeld seems at least partly inspired by Fields's characterization.)

Hillary Brooke (as Hillary Brooke) is another welcome presence. Something of an icy, cultured (though not British, as many assume) femme fatale in '40s mysteries, she's another beguiling, incongruous character here. A neighbor of Bud & Lou - she always addresses the latter as "Louis" - she's unfazed by their antics, especially Lou's childishness. And then there's Stinky, a bizarre 40-something man-child dressed like Little Lord Fauntleroy, memorably played by Joe Besser. Even more infantile than Lou (who constantly shoots off his cap pistol for no reason) Stinky is something straight out of Wackyland. It was a variation of the comedian's signature persona and while limited to a few catch-phrases and gestures ("Not so haaaaarrrd!" and "You crazy, youuuuu!") Besser is utterly, mesmerizingly funny whenever he's on-screen. Lou somehow manages to keep a straight face, but even he can't hide a kind of awestruck admiration for Besser's specialty.

Also fine are Gordon Jones as dim-witted Mike the Cop, who seems to have been cast because of his resemblance and delivery style to Nat Pendleton, the team's memorable foil in several early films; and Joe Kirk as busy Italian immigrant Bacciagalupe, whose accent is as phony as Chico Marx's.

Classic Flix's release of The Abbott & Costello Show - Season 1 presents all 26 first season episodes on three Blu-ray discs. The black-and-white photography, thanks to 3-D Film Archive's restorations, is astoundingly crisp and clean. Except for CBS/Paramount's Blu-rays of I Love Lucy, nothing else TV-wise from this era comes even close, and the mono audio is equally impressive. Liner notes offer correct episode titles and descriptions. Region "A" encoded.

Supplements include "Saving the Negatives," with the 3-D Film Archive's Bob Furmanek (an amusing portrait of frequent A&C bit player Bobby Barber behind him) discussing just how close the original camera negatives and sound elements came to be junked and lost forever, and how lucky he was in locating nearly everything. (This, of course, begs the question: How many 1950s TV titles are in similar states of precarious existence? How many will be lost forever?)

One thing about the show even its fans don't like is its laugh track, which one scholar aptly described as sounding like it was recorded in a roller-rink. This new release offers two complete and six partial episodes without them, but I confess the remastered audio is now so good the laugh tracks don't seem nearly as intrusive as they once did.

This is a major restoration of a landmark television comedy series that deserves to be reappraised and seen by more than just Abbott & Costello fans. Yet another major save from the 3-D Film Archive, The Abbott & Costello Show - Season 1 is a DVD Talk Collectors Series title.