Sidney Lumet's film of 12 Angry Men (1957) is about as perfect as movies get, but William Friedkin's 1997 television remake is also admirable. It doesn't really improve upon the original film, but writer Reginald Rose offers a few new wrinkles and updates to his material (while curiously not changing one characterization sorely in need of change) and the cast is mostly excellent, nearly all offering subtly different interpretations from the peerless original ensemble. 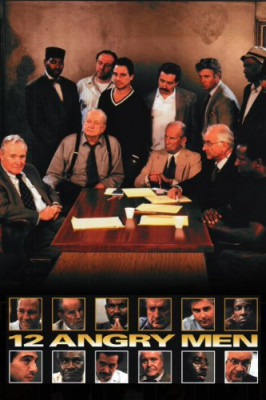 Except for brief opening and closing scenes, the entire story is set in a claustrophobic jury room in the dog days of summer, where 12 jurors deliberate the fate of a teenage Hispanic boy accused of stabbing to death his father. At first, all but one juror is convinced of the boy's guilt, but over the course of contentious and sometimes volatile deliberations other jurors gradually find reasonable doubt and change their votes to "not guilty." But is a unanimous verdict either way even possible?

The story originated as a live, one-hour episode of Westinghouse Studio One that aired in 1954. Directed by future filmmaker Franklin Schaffner, it starred Robert Cummings, Franchot Tone, and Edward Arnold. Lumet's 1957 film starred Henry Fonda, Lee J. Cobb, and Ed Begley in those parts, respectively, while these same roles are played by Jack Lemmon, George C. Scott, and Mykelti Williamson in Friedkin's film.

The most obvious and interesting difference between Lumet' version and Friedkin's is that the unrepentant racist juror, a white man in the 1957 film, here is an African-American, a former Nation of Islam member who, like Ed Begley's bigot in Lumet's film, regards all Hispanics as sub-human. This was a pretty daring move, even as late as 1997. The characters played in Lumet's film by Martin Balsam, John Fielder, and Jack Klugman have also been changed from white to black, played by Courtney B. Vance, Ossie Davis, and Dorian Harewood. Particularly interesting is how Ossie Davis, cast against type, recalls Fiedler's familiar, timid screen persona from the first movie while making it entirely his own. German actor Armin Mueller-Stahl takes over the part played in the film by E.G. Marshall.

Another pleasure watching this version: I'd seen it when it first aired but not since. Looking at it again I was surprised to see a pre-Sopranos James Gandolfini and a pre-CSI (though post To Live and Die in L.A.) William Petersen, in roles played in the first movie by Edward Binns and Robert Webber, respectively. At the time, I had no idea who these actors were.

Rose's updated script has curious aspects. Sports references made during the deliberations are brought up to date, one example being a reference to the 1996 Mike Tyson-Evander Holyfield bout. Conversely, Petersen's character, an advertising executive, has the same, by-this-time very dated dialog that probably wasn't authentic even in 1957, let alone 40 years later, with the character saying things like "Let me run this one up the flagpole" and other ad men clichés. However, all of the other dialogue spoken by the remaining 11 jurors holds up remarkably well.

The crux of 12 Angry Men's story is that the lone holdout at the beginning (here played by Jack Lemmon) acknowledges that he doesn't know whether the accused boy is guilty or not, but insists the others not rush to condemn him to a lifelong prison sentence or even the death penalty without careful consideration. Most jurors believe him guilty based on the case for the prosecution while disregarding the ineptitude of the boy's public defender and subtle flaws in the specifics of the case. Others, however, are convinced of his guilt for other reasons. Juror No. 12 (Petersen) is a resolute conformist, siding with the majority; Juror No 10 (Williamson) is a racist who hates all Hispanics; Juror No. 7 (Tony Danza, in Jack Warden's part), selfishly wants deliberations to end quickly so he can attend a Yankees ballgame that evening; and Juror No. 3 is unconsciously channeling resentment toward his own, long-estranged adult son in this case about a boy accused of murdering his father.

What's interesting looking at this 12 Angry Men now is how Lemmon's pragmatic juror gradually wins most of the others to his side by systematically questioning each flaw in what at first appears to be a slam-dunk case. The boy's guilt or innocence is never definitively proven, but Lemmon's juror chips away at each damning piece of evidence, using logic and the facts of the case to cast doubt on its reliability. That nine of the others could be persuaded to change their votes today seems much less likely than it did even in 1997, in an environment where, for so many people today, facts don't matter. 12 Angry Men's jurors cling to their certainty of the boy's guilt for various reasons, but mostly it's ego. They resent having their judgement questioned. Today, it seems more likely that, for some jurors, this certainty would take on evangelical extremes; the more Lemmon uses persuasive logic, the more unshakable their certainty.

Oh, to have been a fly on the wall during filming! Imagine being on the set watching veterans like Lemmon and Scott rehearsing with newer talent like Gandolfini and Williamson, both excellent. Indeed, there's not a bad performance in the lot, with supporting players Ossie Davis, Gandolfini, Hume Cronyn (as Juror No. 9, an observant old man), Edward James Olmos (as Juror No. 11, an immigrant watchmaker) standing out.

Kino had earlier released the subsequent Lemmon-Scott remake of Inherit the Wind, also good but, just two years later, Lemmon and especially Scott were considerably frailer. (It was Scott's last film.) Here both are in better form, though as with Inherit the Wind Lemmon is good but Scott is excellent. The frequently violent, alcoholic Scott had mellowed somewhat in his old age but still was plagued by demons, and in the show's climatic scene may have drawn from his own troubled family history; he displays emotions and vulnerabilities he rarely allowed even in his best performances.

Kino's new Blu-ray of 12 Angry Men, licensed from MGM, offers the film in two versions, 1.33:1 standard and 1.78:1 widescreen. I watched the latter version, obviously shot for both compositions (presumably for possible theatrical release overseas). The image quality is excellent throughout. The DTS-HD Master Audio (2.0 mono) is likewise strong. Optional English subtitles are provided on this Region "A" disc.

The lone supplement is a trailer.

Sidney Lumet's 1957 film is still the Gold Standard but director William Friedkin's remake is quite good in its own way. The material still holds up just fine and the performances here are excellent. Highly Recommended.