Cinematographer-turned-director Mario Bava (1914-1980) was a great artist yet virtually unknown in Italy even in the decades following his death, when his work was rediscovered and reappraised by writers such as Tim Lucas, whose huge, exhaustive biography is only slightly smaller than a Toyota Land Cruiser. However, Bava's films were big hits in many parts of the world, particularly the U.S., the U.K., and Japan. American International Pictures' Sam Arkoff admired Bava's ability to make super-cheap films looks far more expensive than they were and co-financed some of his best films.

More important, though, was that Bava was a true innovator. His Black Sunday (1960) inaugurated a new type of European-style horror film, while The Girl Who Knew Too Much (1963) effectively became Italy's first giallo. Planet of the Vampires (1965) was hugely influential on Ridley Scott's Alien (1979) and that sub-genre of sci-fi horror that quickly followed, while Bava's A Bay of Blood (1971) virtually invented the "slasher" film.

However, most of Bava's movies barely registered at the box office in his home country, and by the mid-1970s even foreign distributors were hard to come by. His strange, fascinating Lisa and the Devil (1972) was butchered for release in the U.S. three years later, reworked into a rip-off of The Exorcist. His superb giallo-meets-Tarantino Rabid Dogs (1974) stalled near the end of production and not released until 2007, long after Bava was dead and buried.

Son Lamberto got Mario one final job with another Exorcist-flavored horror, Shock (1977), the last Bava film released during his lifetime. Sadly, it's no last hurrah. Bava had always been several steps ahead of the curve, so it's jarring to see him vainly following trends instead of establishing new ones. Bava's style was so distinctive and instantly recognizable it's almost jarring watching Shock, a minor horror film almost any hack could've made. Precious little of it even remotely reflects his unique visual flair, and the screenplay (credited to Lamberto Bava and three others) is quite poor. 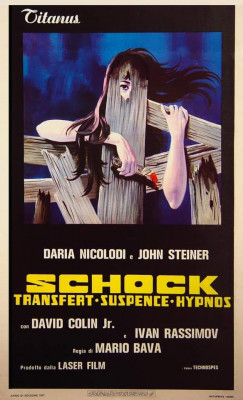 The movie opens with Dora Baldini (Daria Nicolodi), her commercial airline pilot husband Bruno (John Steiner), and Dora's seven-year-old son from her first marriage, Carlo (Nicola Salerno), moving into her former home, the house she shared with Carlo's father, an abusive heroin addict that apparently committed suicide while at sea.

The premise of the story is that the ghost of the deceased husband torments Dora with all manner of supernatural stuff, but primarily by possessing the body of Carlo, leading to several squirmily awkward, Oedipal encounters, but mostly by turning him into a dangerous brat. Naturally, Bruno and all her friends think Dora is imagining things; after all, following her husband's death, she'd spent time in a mental institution and received electroshock treatments. (This particular genre trope, the protagonist accused of imagining things almost always tries the movie audience's patience. They know she's not seeing things, so why can't they, except to pad the running time?)

Bava's direction isn't the problem, though even he can't overcome of the repetitive, uninvolving screenplay. Dora is tormented by such a steady stream of unpleasant and potentially fatal encounters with the supernatural there's no time for Nicolodi to establish an interesting, fleshed-out character. Bruno is away for long stretches on his international flights, convenient for the writers of the movie but annoyingly absent as far as Dora's troubles are concerned. And the possession angle starts so early in the film there's no time to establish little Carlo as a likeable, ordinary kid whose fate the audience can concern itself with. The film is essentially one unmemorable set-piece after another, a few moderately spooky but as many just silly, such as one vignette with Dora haunted by a Slinky "walking" down a flight of steps. Horrors!

Toward the end, I found myself caring not at all for any of the characters and their fates while admiring what a trouper Daria Nicolodi was, bloodied (frequently) and screaming and terrorized for nearly all of the film's 95 minutes. She must have been exhausted by the end of shooting.

Shock may be feeble but Arrow Video puts the title in the best possible light. The 2K 1.85:1 widescreen transfer is culled from the original camera negative and offered in both Italian and English-language versions. (I watched it in Italian, but it was almost certainly shot silent and dubbed in post-production. Watching bits of the English-language version, it appears most of the cast said their lines in English rather than Italian, a common practice then.) The DTS-HD Master Audio mono audio mixes were mastered from the original sound negatives. Region "A" encoded.

The bountiful supplements include a very informative audio commentary by Bava expert Tim Lucas and nearly two hours-worth of original featurettes: "A Ghost in the House," an interview with Lamberto Bava; "Via Dell'Orologio 33," an interview with writer Dardano Sacchetti; "The Devil Pulls the Strings," a visual essay by Alexandra Heller-Nicholas; and "Shock! Horror! The Stylistic Divesity of Mario Bava," a nearly hour-long overview by Stephen Thrower. Also included is a brief audio interview with critic Alberto Farina. Myriad trailers and image galleries supplement an insert booklet.

Arrow's usual thoroughness with both the presentation of the film and with its extra features make even this very minor film attractive, at least for Bava enthusiasts, and for them, despite the humdrum quality of the movie, makes this Recommended.