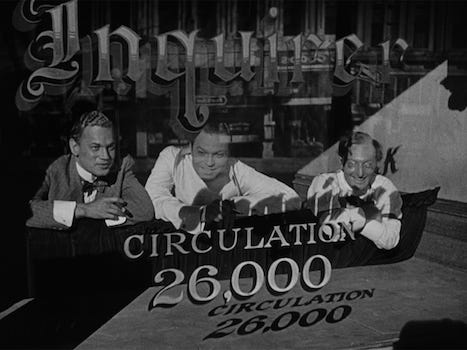 Long ballyhooed as one of the greatest movies of all time -- and maybe the greatest -- Orson Welles's debut feature Citizen Kane has inspired filmmakers and puzzled civilians for decades. (THIS is the greatest movie ever made?! My kid could make something more entertaining with their iPhone!) It both made Orson Welles's film career and cast an impossibly long shadow that he never managed to get out from under -- despite an impressive filmography that includes later masterpieces like Touch of Evil and Chimes at Midnight.

Buoyed by his status as a wunderkind whose Mercury Theatre was a hit on stage and radio, the 25-year-old Welles was given full creative control over his debut as a film director, producer, and star. Working from a script credited to him and Herman J. Mankiewicz, Welles fashioned a stylish and mysteriously elliptical rise-and-fall portrait of a newspaper magnate, clearly modeled after William Randolph Hearst.

The film is framed as a mystery that William Alland's newsreel reporter has to solve: what is the meaning of Charles Foster Kane's dying word, "Rosebud"? Of course, folks who know the Kane lore know that "Rosebud" was purportedly Hearst's real-life pet name for the "flower" which resided in his girlfriend Marion Davies's lap. If true, you have to hand it to Welles for making his film's central mystery a bold thumb in the eye to Hearst while making his film's solution to that mystery far more emotionally and thematically powerful than its raunchy alleged origin.

But of course that solution only comes after Alland talks to a number of folks in Kane's life, including his disillusioned ex-friend Jed Leland (Joseph Cotten), his beleaguered business manager Bernstein (Everett Sloane), and his alcoholic second wife Susan (Dorothy Comingore). (The first wife -- played to prim perfection by Ruth Warrick -- dies tragically young.) Each of them has different jigsaw puzzle pieces that might conceivably form a portrait of Kane, but we never seem to get that full picture. The scenes where we see Susan working on jigsaw puzzles can be read as a comment on this fruitless task (in addition to referencing a noted hobby of Marion Davies).

One can easily argue that the quality of the performances here contributes enormously to the lasting appeal of Kane eighty-plus years later. Welles shamelessly shows off in the lead role, giving us Kane as an old, blustering husk of a man, then as a headstrong young punk, then as countless permutations in between. The niftiest trick, of course, is that only rarely do we see through the old age make-up to the young Welles underneath; his physical and vocal attitudes are usually impeccably calibrated for the different stages of Kane's rise and fall. Cotten and Sloane get less screen time, but they neatly match Welles in aging their characters so that we feel the weight of the years on their shared relationships. (Cotten seems to have particular fun playing the irascible-old-coot version of his character.) Welles stocks the rest of the cast with many of his Mercury Theatre colleagues, like Agnes Moorehead, Erskine Sanford, George Coulouris, Ray Collins, and Paul Stewart.

The lasting appeal of Kane is also tied, of course, to its numerous experimentations and innovations -- in terms of blocking, camera movement, cinematography, story structure, and editing. Gregg Toland's expressionist lighting, deep-focus compositions, and unconventional camera placement are still impressive, even decades after being integrated into the standard visual lexicon -- the work's maverick spirit still separates it from the droves of imitators. The editing by Robert Wise (later an Oscar winner for directing West Side Story and The Sound of Music) is the perfect blend of invisible Hollywood-style cutting and bold, rhythmic edits. (The jump-cuts and scratches of the memorable News on the March sequence -- the latter effect famously achieved by Wise and his assistants personally damaging the film -- represent the first and last time that staged newsreel footage was so convincingly manipulated that it could be mistaken for the real deal.)

Legendary composer Bernard Herrmann got his start in film here as well. There's no arguing with his talent and lingering influence but, while showing Kane to newcomers during my re-watch for this review, they swayed me that the placement of his cues many times felt oddly over-the-top and Looney Tunes-ish. (Of course, Looney Tunes composer Carl Stalling is a genius too, so it's not such a slight to say this.) 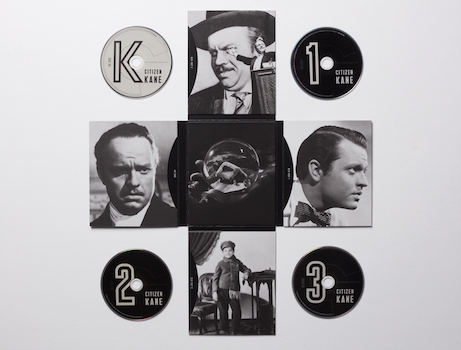 The Blu-ray
Criterion's packaging for the Blu-ray edition of Citizen Kane is pretty much identical to their UHD design (pictured above). Four flaps -- spelling K-A-N-E on their respective outsides -- fold out to reveal different images of the main character on the inside and each hold a disc (well, 3 out of 4 for this BD-only edition). The folks who flipped their lid about the simple "K" cover design really need to see the whole package; it's actually really fun when seen in toto. In the center is a small book featuring a lengthy essay by Bilge Ebiri. The feature and audio commentaries are included on disc one, while bonus features are divided thematically onto two additional Blu-ray discs -- the first concerning Citizen Kane and the second more broadly looking at Welles and the Mercury Theatre.

The Video:
Criterion has corrected the widely reported issue in which the brightness and contrast looked miscalibrated after the first 30 minutes or so. This AVC-encoded 1080p 1.37:1 presentation looks excellent. I don't remember having any qualms with Warner Bros.' 4K-sourced 2011 Blu-ray, so this new transfer only has so much room to improve. Still, the clarity, contrast, and texture are all beautifully rendered here.

The Audio:
The LPCM mono soundtrack naturally has some age-based limitations, but the audio elements have clearly been well-cared-for and meticulously restored over the years. One subtitles option: English SDH.

(HD upscale, 1:35:16) - A feature-length BBC doc about the making of the film from the early 1990s. It includes anecdotes about Welles's early career, the film's production, and the controversy over who wrote what in Kane's script.

(HD, 42:37) - A charming and energetic compilation of moments from Welles's appearances on talk shows over the years, including his final appearance on TV.


Final Thoughts:
Criterion's presentation is so lavish that, even if you own previous Blu-rays and are not looking for a 4K UHD upgrade, this new release is a must-own. DVD Talk Collector Series. 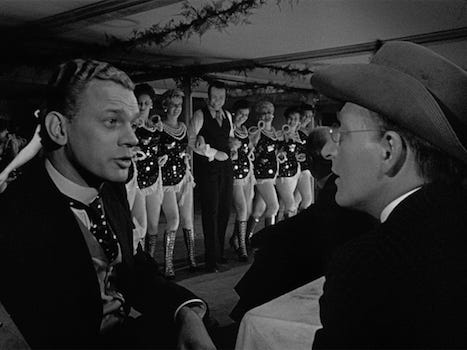