Village of the Giants

Bert I. Gordon, "Mr. B.I.G.," and still with us at age 99, is a filmmaker best known for his preoccupation with matters of size. Seven of his first eight features, including The Amazing Colossal Man (1957) and Earth vs. The Spider (1958), feature oversized monsters, while Attack of the Puppet People (1958), made in response to The Incredible Shrinking Man (1957), is structured around tiny teenagers. Though he dabbled in other kinds of movies, he returned to this well again and again: in 1965 he made Village of the Giants, supposedly based on H.G. Wells' The Food of the Gods, and a dozen years later directed two more Wells "adaptations": The Food of the Gods (1976) and Empire of the Ants (1977), both loosely based on Wells novels.

None of his films are good and many are quite terrible, but the best ones are peculiarly likeable, like a smelly but beloved old dog. His 1950s films, mostly released through American International Pictures, were quite profitable, and so in the early ‘60s Gordon tried expanding into a higher caliber of family fare with The Boy and the Pirates (1960) and The Magic Sword (1962), both for United Artists. Apparently, these were not as successful, forcing Gordon back into familiar territory for Village of the Giants (1965), the first of two pictures he made for Joseph E. Levine's Embassy Pictures.

Despite a better-than-usual cast and moderately slicker production values than his ‘50s titles, Village of the Giants is among Gordon's worst movies. The main culprit is the aimless script, which has about 20 minutes of story stretched to 80 agonizing minutes, including repeated footage and a lot of slow-motion shots, ruining the pacing even further. At times it's like watching a movie underwater. Colorful English actor-professional soldier-hunter-novelist Alan Caillou is credited with the screenplay, possibly made to order around Gordon's spfx set pieces. 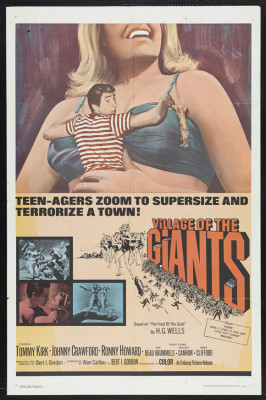 During a rainstorm, a group of teenagers crash their car when the road three miles from Hainesville, California, is washed away. (Improbably, eight teenagers emerge from the two-door coupe. The script called for two cars but Gordon would only spring for one.) They are Fred (Beau Bridges), Pete (Tim Rooney), Rick (Bob Random), Harry (Kevin O'Neal) and their girlfriends Merrie (Joy Harmon), Elsa (Gail Gilmore), Georgette (Vicki London), and Jean (Tisha Sterling). After rollicking in the mud for a time, they hike into town to stir up trouble.

Meanwhile, with their parents away, Mike (Tommy Kirk) hopes to make out with girlfriend, Nancy (Charla Doherty), while his kid brother, "Genius" (Ronny Howard) is experimenting in his elaborate basement laboratory (which includes some of Kenneth Strickfaden's famous electrical gizmos). Genius accidentally creates a strange substance (called "goo" throughout the story). First a cat, some ducks, and eventually the family dog eat the stuff, causing all to grow to gigantic proportions.

The ducks wander over to the local teen hangout (apparently the real Whisky a Go-Go for some interior shots), where the birds awkwardly "dance" to the sounds of the Beau Brummels. The troublesome teens show up, and like Mike recognizing the huge commercial value of the goo, later break into Genius's lab to steal a jar. Hiding out in a local theater, on a dare they instead decide to ingest the stuff, growing abruptly to a height of around 25 feet, and decide to terrorize the town's adults and fellow teenagers alike.

It would be easy to call Gordon the poor man's Ray Harryhausen, but he was more like the poor man's Jack Rabin / Irving Block / Louis DeWitt, men usually in partnership who cranked out better visual effects for cheap films, sometimes with budgets even lower than Gordon's movies. Gordon's go-to effect was the stationary matte, an optical composite of two images, often used in movies and TV shows when one actor is playing two roles within the same shot. Gordon typically placed his normal-sized actors on one side of the frame, and in close shot some magnified animal or actor on the other. This can be effective when used sparingly and combined with clever staging and other visual effects, but Gordon was a one-trick pony in this regard. I can't think of Gordon ever once using a traveling matte, a more complicated optical, in which line dividing the images moves. In Gordon's stationary mattes, the lines of walls, tables, etc., always make the dividing line obvious, and the normal and oversized threats rarely do more than gape and growl at one another.

Indeed, the only times in Village of the Giants where large and small come into direct contact involve a couple of oversized props: a pair of scrawny, hairy but immobile legs representing Bridges's character, and the bountiful bosom of Joy Harmon's, she later immortalized as the car washing flirt in Cool Hand Luke. Johnny Crawford, curiously saddled with a minor role, clings from her makeshift bikini straps in both the movie and its advertising.

The film's tone is, to say the least, peculiar. The Crawford scene and the moment when the women literally burst out of their clothes as they grow to gigantic proportions is clearly meant to titillate; it would have been interesting to hear Gordon's direction of Crawford. Gordon insisted on seeing the women's breasts during the auditions, which upset two of the actresses, apparently.

At other times, especially all the footage with Tommy Kirk and Ronny Howard, Village of the Giants has the genial tone of a Disney comedy like The Misadventures of Merlin Jones (which starred Kirk, 1964) and the later "Dexter Riley" series with Kurt Russell. Kirk had been recently dropped from Disney when they became aware of his homosexuality, and soon after he was arrested on drug possession charges. Those charges were later dropped, but it was downhill from there for Tommy Kirk. First stop: Village of the Giants!

Nevertheless, Kirk and especially Howard come off reasonably well, not the case at all with Beau Bridges, who to his credit took his part seriously, only too much so. Others in the cast, like Bridges and Howard, were the children of established actors. Tim Rooney was a lookalike son of Mickey, while Tisha Sterling was the daughter of actors Robert Sterling and Ann Sothern.

My vague memory of past home video versions of Village of the Giants was that the video transfers were always awful, but Kino's new 4K 1.85:1 widescreen restoration is nigh-perfect, with a sharp, flawless image with excellent, bright primary colors. This takes a lot of the sting off the poor quality of the movie; at least now it looks great. The DTS-HD Master Audio mono is also good and optional English subtitles are provided. Region "A" encoded.

A trailer is included, but the big supplement here is a new audio commentary by Tim Lucas, an unusual assignment for the writer. Nevertheless, it's up to his usual high standards and definitely worth a listen.

The movie is terrible but kind of irresistible at the same time. The gorgeous transfer and Tim Lucas's commentary track make this a highly desirable title for classic sci-fi/horror fans, even if Village of the Giants is far from a classic itself. Highly Recommended.