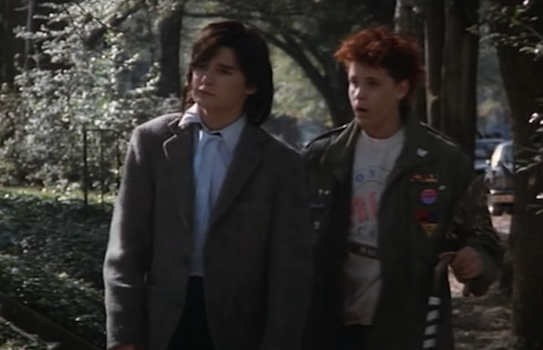 The 1989 metaphysical comedy-drama Dream a Little Dream marks the end of two brief eras in Hollywood: the body-switch boom (Vice Versa, 18 Again, etc.) and the reign of the Two Coreys (Haim and Feldman) as box-office up-and-comers.

Bobby (Corey Feldman) and Lainie (Meredith Salenger, from The Journey of Natty Gann) collide into each other in a backyard and get knocked out at the same moment that an old couple, Coleman (Jason Robards) and Gena (Piper Laurie), are experimenting with some vaguely defined, new age-y consciousness-transferral ritual. The end result is that Coleman ends up in Bobby's body and Gena ends up somewhat buried in Lainie's. Coleman can communicate with Bobby in his dreams, but Gena seems to be trapped in a limbo where she's neither in the real world nor accessible in the dream world. Coleman/Bobby has to somehow get the piece of Gena lurking in Lainie to realize where she is and re-do the experiment. It's a sweaty premise that makes the hokey mysticism shtick that kicks off Vice Versa and Like Father, Like Son look like elegant Billy Wilder plotting in comparison.

The cast of Dream a Little Dream -- which also includes Harry Dean Stanton as Coleman's best friend -- deserves so much better than this not-really-funny, not-really-dramatic teen flick. Feldman has obvious chemistry with Haim, who plays his limping sidekick Dinger, but director Marc Rocco can't seem to elevate most of their scenes from natural, amusing banter to actual humor and laughs. Meredith Salenger shines when she gets the chance to do anything, but she barely speaks throughout the film's first half-hour and only makes an impression as someone who, as one character notes, "looks great in a leotard."

Feldman holds his own in scenes with the legendary Robards and Stanton, but he also has started self-consciously aping Michael Jackson in his movement and dress (a phase he kept up for... well... he still does it, I believe). At one point, his character "impresses" Lainie with his half-assed moonwalk/poplock moves -- something that theoretically Coleman should have no idea how to do.

There are enough little character moments and enjoyable source music cues (from Otis Redding to Timbuk 3) that you almost want to stick with Dream a Little Dream, but director Rocco has such a tenuous grasp on the tone of his film (which climaxes with an out-of-nowhere gang squabble better suited to something like Rumble Fish) that the end result is a two-hour schizophrenic slog. 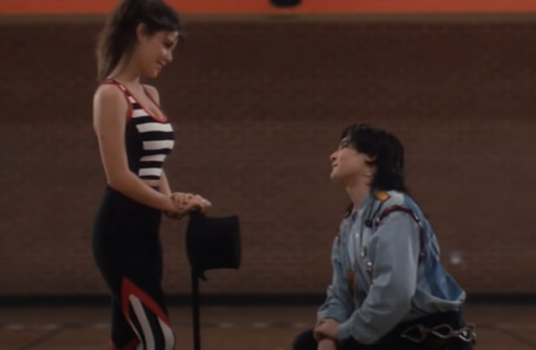 The Video:
The AVC-encoded 1080p 1.78:1 presentation is credited on the packaging as "digitally restored," but it's pretty underwhelming. No dirt or damage, but colors feel relatively weak and the image is oddly soft throughout.

The Audio:
The DTS-HD MA 2.0 stereo is a bit quiet (much like Vestron's The Wraith presentation), but it's a satisfactory mix. Great needle drops. Subtitle options: English, English SDH, Spanish.

- Gahan offers a smooth and info-packed discussion of the film, which he dubs a "classic" early on.

Final Thoughts:
Dream a Little Dream was designed to be Corey Feldman's leading-man breakthrough, with pal Corey Haim switching to the sidekick role. But sadly, the flick is just too slow and scattershot. Vestron has once again done a great job of cooking up new supplements for this "Collector's Series" release, but only established fans should pull the trigger on a purchase. Skip It. 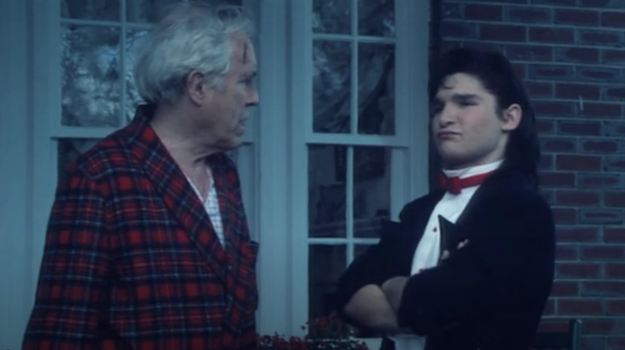