There's an old adage in Hollywood that goes like this: everyone wants to be first to be second. With three-strip Technicolor, it was more like everyone wanting to be first to be seventh or eighth. Color movies are as old as the medium itself, with hand-colored one-reel shorts dating back to the earliest days of motion pictures in the 1890s. Technicolor's first big innovation, its two-color process, dates all the way back to 1916, and turned up in shorts, as color sequences in otherwise black-and-white films, and even as all-color features into the early 1930s. So color in 1935 was definitely a novelty but hardly new. Three-strip Technicolor, debuting with the Disney cartoon short Flowers and Trees in 1932 (and widely adopted in animation soon after), was a definite improvement, but selling the process was a bit like trying to sell 4K televisions to a public mostly content with their standard high-definition monitors. Sure, 4K is noticeably better, but is it really worth all that trouble and expense?

Walt Disney recognized the value of three-strip Technicolor, applying it to his very risky debut feature film, Snow White and the Seven Dwarfs, but that took a long time to produce. In the meantime, it took other independents to introduce this perfected Technicolor in live-action features. Investor John Hay Whitney formed Pioneer Pictures with veteran Hollywood producer Merian C. Cooper to produce Technicolor films that would be released through Cooper's former company, RKO. Their first all-Technicolor feature was Becky Sharp (1935), followed by Dancing Pirate (1936).

The first feature musical made in the new process, Dancing Pirate is of great historical interest but, as a movie, not much more than watchable. It's not the grueling viewing experience Becky Sharp is when seen today; it flows better, has a few good musical numbers, the photography is subtler, and there's really nothing terribly wrong with it. However, other than it being just the third feature film in 3-strip Technicolor, it's pretty darn ordinary. 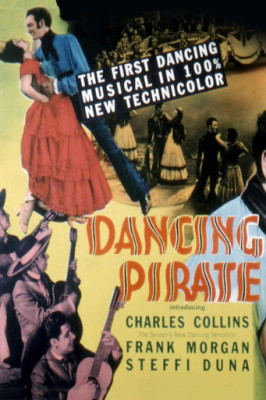 The plot of Dancing Pirate is as substantive as marzipan. In 1820s Boston, handsome dancing master Jonathan Pride (Broadway star Charles Collins) is shanghaied by pirates, but easily able to escape when a provisioning party land off the coast of Spanish Empire California. The pirates quickly depart but local villagers clumsily capture Jonathan, planning to hang him, despite his repeatedly insisting that he's not a pirate but a dance teacher.

At the gallows, Jonathan is finally able to persuade alcaide Don Emilio (Frank Morgan) and his daughter, Serefina (Steffi Duna), among others, to prove his mettle as a dancer. The men aren't terribly convinced but the women long to learn how to dance the waltz, so Don Emilio orders a stay in the execution. However, as the waltz entails the man actually touching his female partner around the waist, this social taboo sends hapless Jonathan back to the slammer.

The producers had hoped to land Fred Astaire (then under contract at RKO) for the lead, but had to settle for Charles Collins, a ‘30s Broadway name but who ultimately starred in just two films: this one and Swing Hostess (1944), an ultra-low-budget PRC musical. (Collins did turn up here and there as late as a 1984 TV appearance, dying in 1999 at age 95.) Reviewers then and now generally point their disapproving fingers at Collins for Dancing Pirate's failings, but in fact there's really nothing wrong about his performance other than a general lack of charisma. He's more handsome than Fred Astaire was in 1936, a decent enough actor and a good dancer; his only crime is an absence of star-quality.

Rather, the real problem with Dancing Pirate is its featherweight plot and cardboard characters, reminiscent of Gilbert & Sullivan operettas like The Pirates of Penance but minus the great music and clever lyrics. (The two Rodgers-Hart songs featured here are unmemorable.) Collins's dancing master glides through the story threatened by cutthroat pirates, repeatedly jailed and nearly hanged, and later forced into a confrontation with unsavory Spanish military renegades led by Don Balthazar (Victor Varconi) -- yet never once really seems to be in any danger. The villagers, while not exactly Latin stereotypes, are so simpleminded and naïve they're like innocent children. Frank Morgan, in a kind of warm-up to his later Professor Marvel/Wizard role in The Wizard of Oz, plays a similarly halting, indecisive, befuddled character that's very amusing in the early scenes but long before the film's over you're thoroughly sick of him: Morgan pulls every actorly trick in his book to breathe life into the character, but goes overboard. This frothy but too-lightweight work may have been the inspiration for the overwrought "The Dancing Cavalier" in Singin' in the Rain.

The movie was shot entirely on soundstages, but the cinematography is much better than Becky Sharp. Much of Dancing Pirate takes place at night, and the lighting is subtler, the colors allowed to be subdued much the time, with brilliant primary colors reserved for the big dance numbers and their accompanying colorful period costumes. Indeed, unlike even the better Technicolor features soon to follow (e.g., Adventures of Robin Hood), the actors' faces don't seem overly made-up. Both Collins and co-star Steffi Duna look, well, normal. Their faces not caked-over with makeup, other than the wigs they wear, they appear very modern and natural.

Dancing Pirate flopped so badly it was one of the very first movies to be shown on early television, debuting in February 1944. That presentation, of course, was in black-and-white, as were most available versions of the film until now. Only incomplete negatives survived, along with 16mm two-color Cinecolor prints. But in 2015 a complete original 35mm nitrate Technicolor print was discovered, and apparently that's what's sourced here. The image is startlingly good, considering: the matrixes line up perfectly throughout, with no multiple image "bleeding" of color. Despite missing frames here and there, expertly minimized in the sound mix, the presentation is commendable. I do wonder to what extent the colors may have been tweaked digitally; it lacks the frequent harshness of Becky Sharp and the overemphatic use of later Technicolor soon after, here looking unexpectedly restrained. The DTS-HD Master Audio (mono) is also above average. Closed captioning is provided and the disc is Region-Free.

The generous supplements include an audio commentary track and insert booklet essay by writer Jennifer Churchill; and a good primer on Technicolor in the nicely illustrated featurette "Glorious Pioneers," narrated by historian David Pierce. A truly odd extra is "Ambushed by Mediocrity," apparently a telephone interview with historian Michael Schlesinger somewhat haphazardly supported by still photos and film clips. It's a curious supplement in that Schlesinger honestly and diplomatically criticizes everything wrong with the movie most Blu-ray buyers will have just invested 83 minutes of their time. There's been some criticism about this on social media, but I found it rather refreshing, acknowledging the elephant in the room. Not every Blu-ray release has to be a lost classic.

Dancing Pirate is Highly Recommended for those interested in Hollywood history and its technological innovations, and for those fans of movie musicals more tolerant and forgiving than more general audiences.