The best film of Japanese director Yasuzo Masumura, at least among the dozen or so top contenders I've seen, Red Angel (Akai tenshi, 1966) is a kind of female-centric Human Condition, director Masaki Kobayashi's massive three-film epic from Junpei Gomikawa's novel. Both are bleak, uncompromising war movies set on the Japan-colonized Manchuria. In The Human Condition the protagonist was a leftist labor camp supervisor while in Red Angel the heroine is a nurse at frontline military hospitals. In The Human Conidtion much of the focus was in the dehumanization of the Chinese by the racist captors, and later of the soldiers themselves, by their own comrades in arms. In Red Angel the focus shifts to the soldiers' brutality of women, both "comfort women" and, surprisingly, even the Japanese nurses, who are routinely raped. And, where in The Human Condition the war and questions of morality become philosophical issues pondered in the protagonist's frequent narration, in Red Angel there more focus on the mutilation of physical bodies. Like The Human Condition, Red Angel is not for the squeamish. 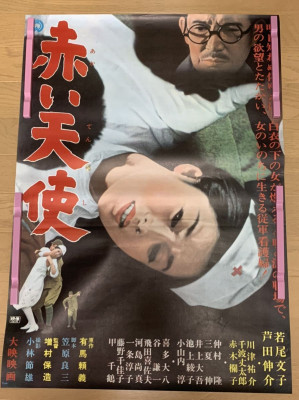 Masumura's frequent muse, actress Ayako Wakao, the star of 20 of his films, plays Sakura Nishi, a Tokyo-trained military nurse assigned to Manchuria. At a hospital where the mutilated and mentally ill are hidden from public scrutiny, she's almost immediately raped by several patients, a common enough occurrence according to the head nurse (1930s star Ranko Akagi), who never questions orders and encourages her nurses to treat the soldiers as weapons of destruction rather than men. Nevertheless, she becomes involved with a double-amputee, Pvt. Orihara (Yusuke Kawazu), who with the loss of his arms cannot even masturbate. (Masumura's direction impressively creates the illusion actor Kawazu was armless; he wasn't/isn't.)

Nishi is soon dispatched to a field hospital on the front lines, very much like a Japanese M*A*S*H unit minus the laughs. Supervised by Dr. Okabe (Shinsuke Ashida), the field hospital is overrun with wounded, to the point where Okabe is forced to choose who lives and who dies during chaotic triage; those chosen to live are routinely amputated with little or no anesthetic. (Transfusions, the audience learns, are reserved for high-ranking officers only.) Okabe, reminiscent of Nishi's long-dead father, is resigned to death, living only for the moment, but she falls in love with him anyway, despite his addiction to morphine.

The film's preoccupation with sex at first left this reviewer nonplussed. Surely, that's the last thing on the minds of Ukrainian soldiers and refugees now? However, Ryozo Kasahara's screenplay, from Yorichika Arima's novel, makes logical sense of this. (Arima, like Gomikawa, spent years at the Manchurian front, as had cinematographer Setsuo Kobayashi.) These soldiers know they are cannon fodder, that their chances of ever returning home alive are practically nil; even the severely wounded are hidden away in the darkness of patient wards lest they be shipped home and damage public morale. Having left their new brides behind, having never seen children born in their absence, or never having tasted lovemaking at all, no wonder they hunger for a fleeting brush with the sexual act before being blown to bits.

Sakura Nishi evolves over the course of the story from rape victim to a kind of empowered woman using her body, more precious than gold in this hellish environment, for fleeting moments of ecstasy. These scenes: allowing the armless Orihara to touch her vagina with his feet and later secretly taking him to a "love hotel" to bathe and caress his body is both uncomfortable to watch while impressing the viewer because of her selflessness.

Like The Human Condition, Red Angel is as relentlessly grim as it is impressive. Even by 2022 standards the film is disturbing: buckets of amputated limbs, bodies of cholera victims dumped into mass graves, soldiers screaming in agony while they're cut open with little to ease their pain. One patient is a communications officer disemboweled by the enemy when he swallowed a codebook.

As writer Irene Gonzalez-Lopez points out in her thoughtful booklet essay, this prestigious Daiei production, made when the studio was just about to enter financial free-fall, was not a great critical or commercial success in Japan, but instead acclaimed by international critics. (Likely Daiei made it on the basis of another Irima's novel, turned into the wildly successful Hoodlum Soldier the year before.)

Actress Wakao, one of Daiei Studios' biggest stars, got to stretch in Masumura's films and, watching Red Angel, it's no wonder she was attracted to his projects. Initially towing the military line, she begins questioning the cracks in Japanese militarism but always in terms of one-on-one treatment of her patients or in her relationship with the doctor. He believes in war one can only live for the moment, but she still believes love is possible, against all odds. They may die tomorrow but having experienced true love and passion is, at least so she thinks, is enough to die having lived.

Helpful supplements put Red Angel into context. They include a new audio commentary track by Japanese cinema scholar David Desser; a new introduction to the film by Tony Rayns; a visual essay on the film, "Not All Angels Have Wings" by critic Jonathan Rosenbaum; a trailer and image gallery. A booklet includes the aforementioned essay by Irene Gonzalez-Lopez, along with a Masumura filmography.