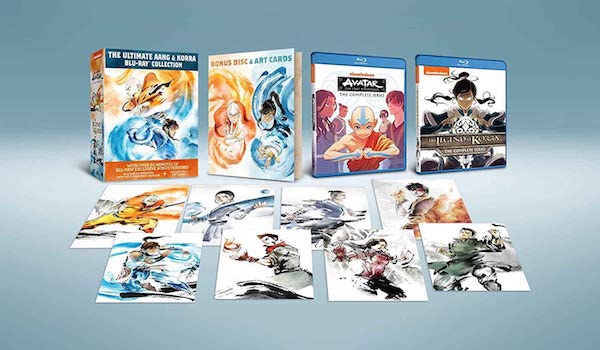 Paramount has released a new box set combining their previous complete-series Blu-ray sets for Avatar: The Last Airbender (2005-08) and its sequel, The Legend of Korra (2012-14). Presumably, this is to prime the marketplace for the live-action Avatar remake series that is filming now. The Ultimate Aang and Korra Blu-ray Collection is principally previously-released material, although a new folder has been slipped into the packaging that contains 8 collectible art cards and a new Blu-ray disc featuring two sizable featurettes looking back at the two series.

DVD Talk already has numerous reviews of Avatar: The Last Airbender and The Legend of Korra, breaking down the "Books," or seasons, of each show, as well as the complete series sets. There are some real gems in there, so I'll keep my comments on the shows themselves brief and then offer some thoughts on the new bonus disc in the sections down below.

Creators Michael Dante DiMartino and Bryan Konietzko created a fantasy world, whose elements borrow from Japanese anime and Chinese martial arts epics, as well as classic mythology and traditions from around the globe.

In this world, tribes have formed around the four Classical elements: Earth, Water, Air, Fire. The Fire tribe have exploited their ability to "bend" fire to wage war on the other nations, almost successfully wiping everybody out. The only person who can defeat them is a youth named Aang. Aang was frozen in an iceberg for a century, while the Fire Nation wreaked havoc. He is both the sole survivor of the decimated Air Nomads and the legendary once-in-a-generation Avatar, who can "bend" all four elements to help him in battle -- but only once he learns how.

Avatar is an energetic adventure saga with plenty of heart and more than a bit of humor. The sequel, The Legend of Korra, is set 70 years later and follows the next Avatar in a more modern, more technologically advanced world, and it features slightly more serious, grown-up storylines. Korra delves more deeply into political intrigue, spiritual quandaries, and the heavy responsibility that comes with being a leader.

Both series stand above run-of-the-mill animated shows with complex and nuanced storytelling, and increasingly more impressive animation as the shows go along. Whether this world will translate to live-action remains to be seen. (And the less said about M. Night Shyamalan's infamously misbegotten 2010 attempt... well...) 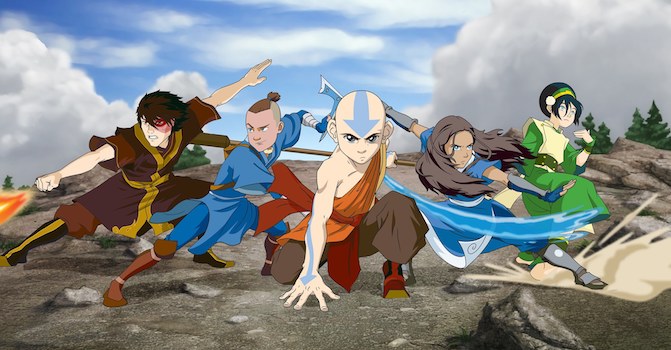 The Blu-ray
The Ultimate Aang and Korra Blu-ray Collection box contains two thick plastic keepcases containing the standard complete series editions of Avatar: The Last Airbender (9 BDs) and The Legend of Korra (8 BDs), with a slim folder slipped in between that holds 8 collectible art cards (shrinkwrapped as a pack) and a new bonus Blu-ray Disc (see Special Features below).

The Video:
Both shows are presented in AVC-encoded 1080p (mostly), although Avatar was finished in SD and is presented in a 1.33:1 upscale. It lacks the detail of true HD, but it looks pretty solid considering its origins. Colors are quite vibrant. Korra famously has had some confusing video treatment on Blu, with Book Two presented in 1080i, like the broadcast version, and Book Three presented in 1080p but with strange deinterlacing issues seemingly because of an inattentive conversion from the broadcast source. Books One and Four of the latter series look A-OK.

(HD, 38:55) - Co-creators Michael Dante DiMartino and Bryan Konietzko discuss the music of their shows over Zoom with composer Jeremy Zuckerman. Then, three members of the sound crew -- Benjamin Wynn, Aran Tanchum, and Vincent Guisetti -- discuss the sound design of the shows.

Final Thoughts:
Fans really don't need to double- or triple- or quadruple-dip here, because the new bonus features exclusive to this set are just okay. However, for first-time purchasers, this seems like a great way to get two great series in one place. It would have been nice if Paramount freshened up the video on some of these rather just offering a repackage of the existing discs, but what can ya do? Considering the relatively low asking price, this set comes Recommended. 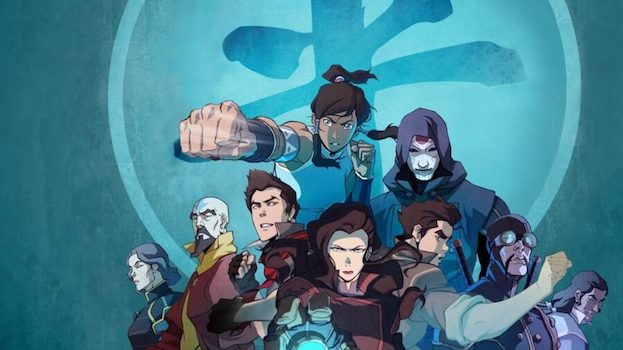