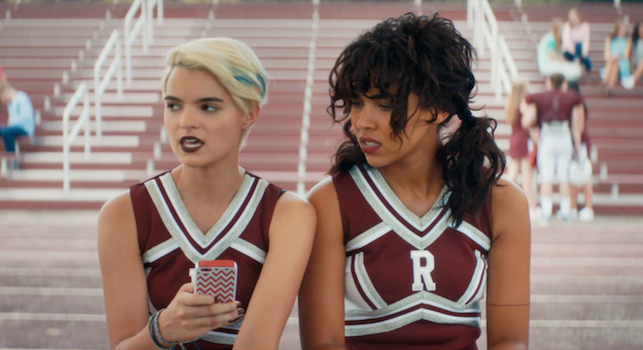 The 2017 slasher comedy Tragedy Girls originally hit Blu-ray back in 2018, but it was an MOD disc with limited bonuses. A few short years later, fans are now treated to a pressed disc with flashy packaging, plus Gunpowder & Sky have loaded up the disc with oodles of new extras.

The film is the kind of self-conscious scarefest that is made for fans who prefer to see the old familiar tropes flipped on their heads. On the self-aware horror-comedy continuum, Tragedy Girls falls closer to the snarky black humor of Freaky and Heathers than the odd sweetness of Tucker & Dale Vs. Evil.

The plot follows teen gals Sadie (Deadpool's Brianna Hildebrand) and McKayla (X-Men: Apocalypse's Alexandra Shipp) as they attempt to build a following for their Tragedy Girls social media brand. To do so, they hijack the murder spree of the Rosedale Ripper (Kevin Durand), a local serial killer. They kidnap the Ripper and start posting on all the platforms about his new brutal murders -- which are actually theirs. The film doesn't really satisfyingly explain how murder = new followers, but there are enough inventive and gory kill scenes (featuring funny guest stars like Josh Hutcherson and Craig Robinson) that viewers probably won't question it -- for a while.

About halfway through the film, you can feel the filmmakers straining for more complications to keep the movie going. So, just as the Tragedy Girls start to taste the glorious internet virality they crave, the Ripper escapes and becomes a killing free-agent they can't control. Also around this time, Jack Quaid (of the 2022 Scream flick), playing Sadie's clueless love interest, ends up coming between the two psychopathic friends and splitting up their double-act for a bit. Eventually, everyone comes back together at the prom -- because it's high school, duh -- but the film just starts wrapping up story threads without finding satisfying ways to do so. Even with a buttload of late-in-the-game exposition, the film fails to really justify its final 20 minutes.

On the other hand, Hildebrand and Shipp make an absolutely perfect team: smart, charming, and adept at serving up the flick's sick humor. The movie might not always deliver, but the two leads consistently do. Slasher fans should stick it out with Tragedy Girls, if only just for the delightfully wicked performances.

The Blu-ray
Tragedy Girls comes with two-sided cover art, plus a limited-edition embossed slipcover if you purchase from the Vinegar Syndrome website.

The Video:
This AVC-encoded 1080p 2.39:1 presentation is strong for a low-budget digitally-shot feature. Colors are rich and saturated. Dark scenes have good detail without looking overly brightened or overlit. No major encoding issues present either.

The Audio:
The DTS-HD MA 5.1 surround mix is slick without but not particularly immersive. The music and effects are well-supported and the dialogue is always understandable. One subtitle option: English SDH.


Final Thoughts:
Not perfect, but Tragedy Girls is plenty entertaining for folks who like their slashers smart, sassy, and self-aware. Recommended.