Man on the Moon

Though saddled with an inapt title, Milos Forman's Man on the Moon (1999), a biopic of controversial entertainer Andy Kaufman (he didn't consider himself a comedian), is very nearly a masterpiece. It falls just a bit shy of that for reasons I'll discuss below, but it's mostly remarkable, and star Jim Carrey, whose solo comedies I never much cared for, so impressively inhabits the Kaufman character one almost instantly forgets that it's Carrey, not Kaufman, onscreen. 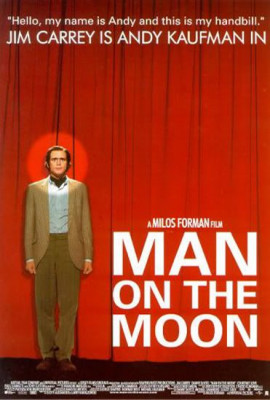 Kaufman's act was primarily constructed around thwarting audience expectations, to the point of making them feel confused, uncomfortable, and even outraged, unaware it was all an act. The movie also does this to some extent, beginning as it does with a big chunk of the end credits. Mostly, though, biopic specialists Scott Alexander and Larry Karaszewski (Ed Wood, etc.) build a basic story of Kaufman's life from roughly the mid-1970s until his untimely death around a series of anecdotes, Kaufman's greatest hits, as it were. These sequences will delight those already familiar with Kaufman's notoriety and thus in on the joke, as the recreations are meticulous, even uncanny at times, while those less familiar with Kaufman will find them as surprising as audiences did then.

The main part of the film opens with Kaufman on stage as his "foreign man" character, badly telling routine standup jokes and doing terrible imitations of celebrities. Until, that is, he reveals a rhinestone jacket and does a dead-on perfect imitation of Elvis Presley. Legendary talent agent George Shapiro (Danny DeVito) is impressed by the act, and startled to learn Kaufman isn't from some remote Eastern European backwater nation.

Shapiro lands Kaufman his star-making signature role, adapting that character into Latka Gravas on Taxi, but Kaufman hates sitcoms, and only agrees on the condition he be contracted to a series of TV specials, and that his associate, grotesque lounge singer Tony Clifton, also be allowed to make guest appearances on Taxi. Shapiro is appalled by Clifton's act, especially when he becomes abusive toward a member in the audience. But Clifton turns out to be Kaufman's alter-ego, and the abused customer Kaufman's creative partner, Bob Zmuda (Paul Giamatti).

Kaufman's fame rides hand-in-hand with alienating his own audience. At a one-man university appearance, he becomes so annoyed with the conventional crowd that he reads The Great Gatsby aloud, in its entirety, to a dwindling audience. Later, Kaufman, playing himself, becomes a misogynistic bore, a wrestler that'll only compete with women he baits with hateful taunts during these "Inter-Gender" matches. One outraged woman, Lynne Margulies (Courtney Love), challenges Kaufman only to learn later this, too, was all an act.

Whether Kaufman's stunts are innovative performance art or merely juvenile pranks (or perhaps some combination of both), is left to the audience to decide. Kaufman, in The Man on the Moon, seems drawn to outrageous ideas that amuse him (and Zmuda) without much regard for his audience. Indeed, the more upset his stunts generate, the more confused they are by them (such as the illusion that Tony Clifton is a real person, independent of Kaufman), the more delighted his is.

Jim Carrey's performance is so precise, and the recreations so accurate the film was mesmerizing even 23 years ago when the past it recreates was less distant, particularly scenes on the Taxi set, where nearly all of that show's regulars appear unchanged, more than 15 years after the last episode aired.

Where Man on the Moon falls short of greatness is that the screenplay presents scenes from Kaufman's life without ever digging far enough to any real suggestion of who the "real" Kaufman ultimately is, and what drives his groundbreaking but also self-destructive passion to generate chaos. One could argue Kaufman was like Peter Sellers, the great English comedian who hid behind the characters he created, to the point where he had no personality without them, an observation made by Sellers himself. But Sellers's case seemed driven by a combination of mental and physical health issues and fame-driven arrogance and insecurity. In Man on the Moon, Kaufman is depicted as someone truly living in a world of his own, a self-described "song and dance man" who's always on, even when playing to an audience of one. The movie suggests a "normal" Andy Kaufman that could completely come back down into reality, if only long enough to discuss contracts and the like, never existed. Even his relationship with Lynne is subservient to Kaufman's antics, including intimate moments.

The movie itself doesn't pretend to be presenting "reality"; a climatic Carnegie Hall concert shortly before Kaufman died actually happened years before, for instance. But the depiction of the superlative Taxi as a crummy, run-of-the-mill sitcom is odd, especially given the participation of so many of those involved. In Man on the Moon are we, the movie audience, seeing that show from his perspective? The screenplay and Forman's direction don't make this clear.

The real Bob Zmuda was one of the producers, and his desire for a playful approach that didn't always follow historical fact seems to have dominated, even hinting that, maybe-just-maybe, non-smoker Andy Kaufman didn't die of lung cancer at age 35 after all. Nearly 40 years on, we can still hope.

Filmed in Panavision, Man on the Moon looks great in a new 2K transfer supervised by the film's cinematographer. It really sparkles, as do the two audio mixes, DTS-HD Master Audio 5.1 and 2.0 mixes. Optional English subtitles are also provided on this Region "A" disc.

Lots of supplements here, though most repurposed from earlier releases. New is an audio commentary with screenwriters Alexander and Karaszewski, moderated by Howard S. Berger. Also included is a conversation between the late director Forman and the writers. Archival material includes a standard making-of featurette, about 12 minutes of deleted scenes, two R.E.M. music videos (all in standard-def) and a trailer (in high-def).

Man on the Moon is a fascinating, very entertaining film, whether you're a fan of Andy Kaufman's mischievous antics or totally unfamiliar with the man. Highly Recommended.