Flight of the Phoenix: The Criterion Collection, The

Pegged a "survival drama" over at Wikipedia, Robert Aldrich's The Flight of the Phoenix (1965) is a nearly perfect film of its type, with almost none of the directorial sloppiness that seems to plague even many of Aldrich's best films. (Even the music of Aldrich favorite Frank DeVol, whose film scores are usually inferior and distracting, is better than usual.) Following a diverse of group of air crash survivors stranded with limited water in the Libyan Sahara, the story is built around a clever idea and a downright ingenious plot twist. Other than top-billed James Stewart, the international ensemble (and almost-but-not-quite all-male) cast consists primarily of character actors that only occasionally played leads. 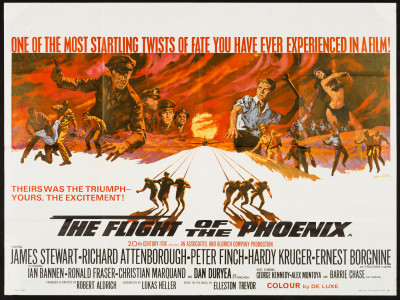 The routine flight is interrupted by a sudden sandstorm, which disables the engines and forces a crash landing more than a hundred miles off-course. Unexpectedly, the main titles play over the chaos as the plane goes down, a ballsy yet effective move by Aldrich.

Two passengers die in the crash (curiously played by Aldrich's son and son-in-law) and another is seriously injured with a crushed leg. However, most everyone anxiously assumes they'll be rescued within a few hours, certainly no later than the next morning.

Days pass, however, with no sign they'll be rescued. They have plenty of pressed dates to eat, but a limited supply of drinking water and it's 120-degrees in the shade, except there is no shade. Pretty soon they all have sun-scarred, peeling faces that look like a ceiling that hasn't been painted in 70 years.

The survivors try several ideas: Captain Harris proposes walking back to civilization, a fool's errand, but with no better plan Towns allows Harris to proceed. Later, Dorfmann proposes something even more outrageous: build a new airplane out of the salvageable parts of the old one. At first Lew thinks Dorfmann is joking but when Dorfmann, offended, insists that he's serious, that he's studied the aerodynamics of the proposed new aircraft, Towns is angrily dismissive, but finally agrees to the crazy scheme.

Stewart had rebranded his screen persona in the years following World War II toward brooding, obsessive types, most famously in director Anthony Mann's Westerns and in Alfred Hitchcock's Vertigo. Gradually, however, he deliberately began drifting away from such parts, in innocuous comedies like Mr. Hobbs Takes a Vacation (1962), Dear Brigitte (1964), and The Rare Breed (1966). He did, however, return to the more interesting, darker characters occasionally, mostly in Westerns like Shenandoah (1965) and Bandolero! (1968). In Phoenix, Stewart's Towns is wracked with guilt, blaming himself for the crash its steadily growing list of casualties, a genre cliché but which in turn makes him increasingly irascible, irrational, and pig-headed, particularly toward Dorfmann, an easy man to loathe as his computer-like precision and logic fall hand-in-hand with an almost psychopathic amoral pragmatism. A big part of the drama is this battle of wills between Dorfmann and Towns, the latter atypically helpless in events beyond his control, so self-absorbed with his guilt that he's unable to lead, fighting the tactless, arrogant German who, maddingly, always seems to be right in the end. For them, getting out of this alive becomes almost secondary.

All of the performances are no less than very good. I've not read Elleston Trevor's novel but Lucas Heller's screenplay impressively makes all the characters multidimensional while avoiding Irwin Allen-type disaster stereotypes. Attenborough stands out as the rummy navigator who has to mediate a settlement between Towns and Dorfmann before they all die of thirst; and Bannen, as the fatalist, cynical Scot (not Cockney!) with the blackest sense of humor. Ernest Borgnine is also fine as the good-natured Trucker, an uneducated, almost Lennie-like simpleton foreman who's lost his job after a mental breakdown. Though the character isn't essential to the story, Borgnine delivers an Oscar-caliber performance.

Without revealing it here, Flight of the Phoenix has one of the greatest plot twists in the history of movies. This, combined with its methodical pacing, means that it doesn't hold up to multiple viewings quite as well as other great films, though it's a terrific title to spring on those unprepared for its story. It's certainly far superior to its already forgotten 2004 remake starring Dennis Quaid.

The film is dedicated to legendary stunt flyer Paul Mantz, who died filming second unit aerial scenes. (Incredibly, footage of the horrific fatal air crash was widely exhibited at the time and can still be found on YouTube.) Mantz's colorful work includes several Cinerama films; he was also the pilot who flew Jim Backus's plane through a freeway billboard in It's a Mad Mad Mad Mad World.

Director Aldrich disliked ‘scope aspect ratios for some reason, shooting nearly all his films in 1.66:1-1.85:1 widescreen. The Flight of the Phoenix has never looked particularly great, but Criterion's new transfer is the best I've seen it, beating out slightly an earlier Masters of Cinema release. The mono audio is also noticeably improved. Optional English subtitles are provided on this Region "A" disc.

Just as Arrow Video seems determined to overwhelm its releases with extra features, Criterion seems to be scaling back noticeably. This release includes just two new supplements: a good discussion about the film between film historian Alain Silver and director Walter Hill; and a very good featurette with Stewart biographer Donald Dewey tying Flight of the Phoenix into Stewart's real-life history as a bomber pilot during World War II. A booklet essay by Gina Telaroli accompanies a clever insert better appreciated after seeing the picture.

Against all logic, surefire audience pleaser The Flight of the Phoenix flopped at the box office. For years it was a movie many, like this reviewer, discovered on commercial television, viewers drawn to Stewart's star power and bowled over by its absorbing story, so good even commercial interruptions couldn't dilute it. A strong disc of an excellent film, this is a DVD Talk Collector's Series title.