Written on the Wind (The Criterion Collection)

Douglas Sirk's great Southern Gothic melodrama Written on the Wind (1956) is one of the most over-analyzed movies in all of cinema. As with Sirk's other ‘50s melodramas, Magnificent Obsession, All That Heaven Allows, etc., critics and audiences feel obliged to justify its lasting appeal and critical success. Modern writers and audiences often seem mildly embarrassed that the movie's magic works so well, damning Sirk's films with faint praise, qualifying with terms like "high camp" and "glorious kitsch." A related approach is viewing these 1950s movies through a 21st century prism, sometimes reading far more subversiveness than is actually there, or retrospectively finding irony in Rock Hudson's manly and very heterosexual heroes. For gay audiences especially, the Sirk-Hudson films are howlers on the order of John Waters's wild satires.

Better, I think, is to put movies like Written on the Wind into context relative to all the other kinds of movies Hollywood was making at the time. Sirk's films are certainly more visually heightened (lots of primary colors and ultra-idealized art direction) and more intelligent than other genre films grappling with similar subject matters, but I think it's enough to appreciate movies like Written on the Wind on their own terms. Let it work its magic. There's no need to feel embarrassed for liking it. 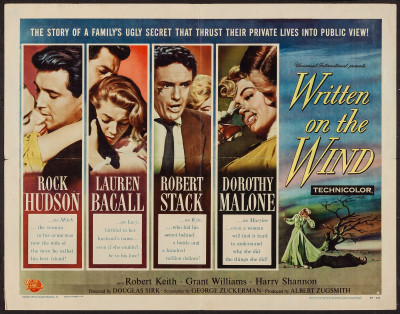 In a terrific main titles sequence, alcoholic playboy Kyle (Robert Stack) returns home to his Texas oil family's mansion in a rage, frightening Lucy (Lauren Bacall) and seemingly pleasing Kyle's sister, Marylee (Dorothy Malone), each observing his stormy arrival from their bedroom windows. Gunshots ring out, and a wounded figure stumbles out of the house.

Flashback to months before. Kyle and Marylee are the spoiled, indulged children of ailing oil baron and widower Jasper Hadley (Robert Keith, father of actor Brian Keith). With his own children hopelessly irresponsible, Jasper entrusts humble, reliable geologist Mitch Wayne (Rock Hudson), a working-class childhood friend of troublesome Kyle, with much of the company's daily operations, with one of his primary duties to try and keep Kyle out of trouble.

On a business trip to New York, they meet Hadley Company secretary Lucy Moore (Bacall). Though Lucy and Mitch are attracted to one another, it's Kyle who falls head over heels, at first trying to seduce her with his millions, but soon so determined to marry her that he swears off drinking. They do indeed marry, and to everyone's surprise, Kyle manages to stay sober.

(Spoilers) Mitch, however, still pines for Lucy, a woman he can't have, while Marylee, in love with Mitch herself, vents her frustrations by flirting her way into bed with any man she can get her hands on. Meanwhile, Kyle's sobriety is tested when his doctor informs him of a low-sperm count that likely makes him infertile (though impotence is clearly implied). Having longed for children of his own, Kyle goes on a volatile bender, made worse when he learns Lucy is pregnant and spiteful Marylee hints that Mitch is the father.

Like Sirk's best melodramas, Written on the Wind dazzles, striking just the right degree of heightened emotion and stylized visual design. It's not camp, by design or accidental; rather, it simply feels deeply, outwardly and expressively rather than internalized. This and through the fine acting the movie gets away with subject matters taboo under the 1950s Production Code: nymphomania, impotence, #me-too-like powerful men luring women with money and glamor, domestic violence and the downward spiral of alcoholism. It's an unusual movie, resolutely locked in 1950s Americana yet also still very relevant and modern.

As much as critics want to diminish or dismiss the film as soap opera, it really digs deep in its characterizations. Kyle desperately wants to please a father who gave up on him long ago. No matter how much Lucy assures her new father-in-law that her husband is a reformed man, he just can't believe it. Kyle loves Mitch and can't function without him cleaning up after his messes, yet resents the fatherly trust Jasper gives Mitch while denying Kyle. Marylee seems to enjoy her nightly sex romps and machinations in taunting poor, miserable Kyle, yet can't hide her own desperately unhappy existence. Lucy, like Mrs. Norman Maine in A Star Is Born, can see a childlike innocence buried deep inside Kyle and is determined to "save" a man probably long past saving.

Stack and Malone are outstanding, with Keith, Hudson, and Bacall all very good. It's probably Stack's best film performance, he using his wealth and conforming to male expectations like a 1950s Will Smith. Ironically, it's Rock Hudson who's stuck playing the least interesting character, a stable man guided by a moral compass in a town dominated by the outlandish escapades of Stack and Malone. Sirk greatly enhances what might been overwrought while contrastingly an ordinary-looking film, and one wonders to what degree, if any, he was given more latitude by sleazy producer Albert Zugsmith, who had a taste for unsavory material, versus Sirk's usual producer, Ross Hunter. The picture still falls firmly in line with Universal-International concept of A-picture entertainment, yet Sirk stretches those boundaries to their limit. Nevertheless, the picture was both a critical and commercial success. Malone's character seems to have had such an impact that her characterization may have directly led to women-in-heat movie types that actresses like Yvette Vickers would soon specialize.

Shot for 1.85:1 widescreen with original prints by Technicolor, Written on the Wind looks great on Blu-ray, a 2K restoration, the bright, primary colors "popping" like they did on original IB prints. The lossless mono audio is also an improvement over earlier home video releases. Optional English subtitles are provided on this Region "A" release.

Besides the usual booklet essay (here by Blair McClendon), there are just two supplements, but they're good ones. The first is a 2008 documentary culling material apparently shot in the early 1980s, featuring Sirk, Zugsmith, Hudson, Malone, and Stack. It's unusual to see interviews this old put together this way, but the results are fascinating, and credit to the actors who all recognized Sirk and the film's qualities long before its reappraisal years later. The second extra has film historian Patricia White exploring Sirk's relationship with the melodrama film genre.

Written on the Wind is one of the best Hollywood films of the 1950s, and holds up remarkably well even now. A DVD Talk Collectors Series title.