Devil Strikes at Night, The

I snapped up The Devil Strikes at Night (1957) from our screener pile expecting this manhunt for a serial killer would be something like an earlier, more serious Edgar Wallace movie, less campy than those West German productions that soon followed. The first surprise was that The Devil Strikes at Night was not set in contemporary West Germany, but rather Nazi Germany in 1944. The setting added unexpected interest, as the movie's depiction of everyday life in late-wartime Hamburg and Berlin is very different from what one usually sees in movies set in that time and place. What I was really unprepared for was that, about two-thirds into the picture, the focus shifts away from the search for the murderer and instead becomes a very intelligent, even unique political thriller.

Dresden-born director Robert Siodmak (1900-1972) began his career in Germany, then flourished in French cinema for a half-dozen years before fleeing to Hollywood in 1939. There he came to specialize in film noir before returning to West Germany in 1954 where he spent the remainder of his career, though he did direct a few U.S. co-productions made in Europe including the disappointing Custer of the West (1967). 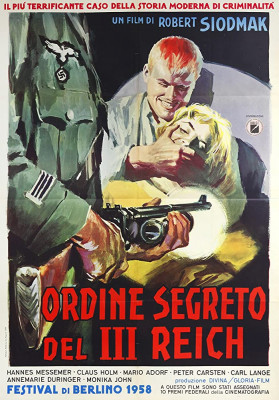 Axel Kersten (Claus Holm) has just returned from the Russian front with a leg injury, allowing him to return to his job as a homicide detective. He's attracted to Helga (Annemarie Duringer), a clerk at his office, and through his budding romance with her Kersten begins noticing connections among various unsolved murers across Germany over many years, strangulations in which the victims' neck bones are broken by the killer's powerful fingers -- including a recent one where a waitress (Monika John) was apparently strangled by her lover, a married, low-ranking Nazi public relations officer (ubiquitous Werner Peters) who insists he's innocent. However, the movie audience is already aware that the real killer is dim-witted casual laborer Bruno Ludke (Mario Adorf), a malevolent Lennie-type.

Kersten's investigation attracts the attention of SS Gruppenfuhrer Rossdorf (Hannes Messemer, later the more sympathetic P.O.W. camp commandant in The Great Escape). Agreeing with Kersten's theory that the killer has a low I.Q., Rossdorf hopes to use the case to justify Hitler's plans for the extermination of undesirables judged "mentally deficient."

The movie depiction of wartime Germany is unlike anything I've seen in movies both German and non-German in origin. The citizenry is subjected to Allied air raids and there are food shortages and the like, but mostly life goes on with surprising normalcy. They go to work, drink beer at pubs and, more or less, carry on as usual, at least to the extent possible. Many are cynical about Germany's chances and recognize the hypocrisy and cruelty of Nazism, speaking guardedly in public (intriguingly using conversational code words and phrasing when complaining around others) but, in the privacy of their own homes, are quite open in their displeasure of Hitler. One can't help but wonder if this German film about German life a mere 13 years before is mostly accurate or a kind of reimagining of a Germany in which few Germans were truly hardcore Nazis.

The films starts well and gets better and better as it goes along. Finding and arresting Bruno becomes only one facet of this ambitious film, which is just as interested in the politics of the day: Rossdorf wants to use the Ludke case to justify mass killings of undesirables, but later decides to bury the case lest the German people question the infallibility of the German police force, which allowed Bruno to kill and kill again for years, perhaps fifty or a hundred victims, including children. For the Gestapo, better that a low-ranking party member be executed for a crime he didn't commit than have the truth get out and the German people think its police are any less than perfect.

The Devil Strikes at Night continually surprises. There's jet-black humor scattered about: (spoilers) when Rossdorf enters the interrogation room, Bruno tries to "heil Hitler" except that he's handcuffed, making for an awkward salute. An entire scene is built around Bruno goaded by a girl he likes into returning a girl's wallet he "found," actually a souvenir from his most recent murder.

Siodmak's direction also has its share of surprises. Way ahead of its time is a scene with Bruno retracing his steps at one murder, swept up with adrenalin, the camera barely keeps pace with him as he runs through a forest, reliving the crime, his victim discreetly kept just "out" of the camera's frame.

Adorf, making his film debut, is a sensation, and still active into his nineties, his last movie role about five years ago.

Apparently restored in Germany, The Devil Strikes at Night looks almost brand-new, the 1.37:1 standard framing and crisp black-and-white cinematography looking great throughout. The English subtitles for the German dialogue is also well above average. A Region "A" release.

There's just one supplement but it's a good one: an excellent audio commentary track by Imogen Sara Smith that puts the film and its real-life origins into context.

A real surprise, The Devil Strikes at Night is one of the best Blu-ray finds so far this year, and most Highly Recommended.