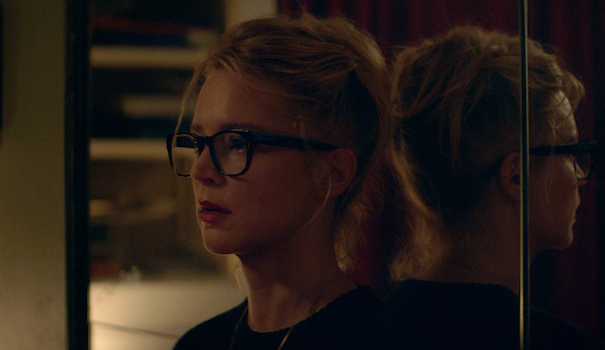 The film begins with writer-turned-therapist Sibyl's return to writing after ten years. She cuts most of her clients loose, but then discovers she has nothing to say as a writer. When a distraught young woman calls her for help, Sibyl initially resists. Soon, the woman's tear-soaked pleas are too persuasive to combat and Sibyl starts meeting with her. It turns out that the young woman, Margot (Blue is the Warmest Color's Adèle Exarchopoulos), is an actress who is newly pregnant by a big-name actor and she's unsure if she should keep the baby. The story potential of this situation is too much to resist, and Sibyl starts clandestinely recording their sessions to use as fodder for a new novel. Ethics be damned.

Triet shows Sibyl frequently living in the past. Memories of a tempestuous bygone relationship with the rugged Gabriel (Niels Schneider) interrupt Sibyl during sessions, while writing, or while interacting with her husband (Paul Hamy) and children. The spark that Sibyl gets from Margot's confessions is somehow mirrored by the passionate moments Sibyl conjures from her own past. Is she trying to recapture Gabriel by recapturing her writing career of a decade prior? Or is this just such a volatile process for recovering alcoholic Sibyl that it becomes a kind of emotional backslide even without touching a drink (yet)?

In the accompanying featurette on the Blu-ray, director Triet says she drew initial inspiration from Woody Allen's Another Woman, where Gena Rowlands is reinvigorated by eavesdropping on the therapy sessions of Mia Farrow. However, her film heads in a different direction, with visual and thematic echoes of Jean-Luc Godard's Contempt, as it details a disintegrating relationship during a film shoot in an island paradise. Margot manipulates Sibyl to follow her to the island of Stromboli, where she and her actor lover Igor (Moon Knight's Gaspard Ulliel) are filming. (It's also the site of the film where Ingrid Bergman and Roberto Rossellini began their relationship illicitly -- another reference?)

Igor -- when he's not impregnating his costars -- is in a relationship with the film's director Mika (Toni Erdmann's Sandra Hüller), making the neurotic Margot even more neurotic about the shoot. She forces Sibyl to be the go-between in her dealings with Igor, which snowballs into Sibyl becoming a stand-in during shooting and even directing a seduction scene when Mika walks off the set. Every character seems primed to take Sibyl into their confidence and Sibyl, presumably seeing the story potential, welcomes the over-sharing.

Hüller steals the film in this section. Her character's desire to finish shooting at all costs triggers amusingly passive-aggressive reactions to the behavior of her love-triangle-mates. "Keep the drama fictional, if you don't mind," Mika deadpans while directing Margot to slap Igor, an action which requires a few dozen takes.

At one point in the film, Sibyl's distraught sister asks her how she holds it all together so well. Her detached reply is, "I fake it." From that point on, it's just a waiting game until Sibyl comes undone. When she does, Efira looks like she's having fun letting Sibyl spiral, but the film feels more formulaic and less inspired.

Sibyl's flashback-filled structure is occasionally confusing -- my roommate and I had trouble parsing different timelines because the three main actors all have similar faces -- but the film has a boldness in the way that it plays with psychology, complimented by its precise performances, that makes Sibyl a prickly and pleasing experience.

The Blu-ray
Sibyl is available with a limited edition slipcover when ordered directly from the Vinegar Syndrome website.

The Video:
The AVC-encoded 1080p 2.35:1 presentation is sourced from a digitally shot image and seems to have lost little in translation. City sequences look a little desaturated compared to the vivid colors of the Stromboli-set sequences, but the contrast appears intentional. Solid fine detail and good shadow detail in dark nighttime moments.

The Audio:
The film is available in both French DTS-HD MA 5.1 surround and French DTS-HD MA 2.0 stereo mixes. They are not wildly different, although there is a greater ambient spread with the surround mix. The disc thankfully offers two subtitle options: English and English SDH, the latter including the English sections of the dialogue in its transcriptions.

- Frequent commentator Heller-Nicholas pointedly states that she is doing a "big picture" commentary rather than scene-by-scene analysis, although she does occasionally reference the action onscreen. As always, she offers a well-researched and cogent discussion that is well worth a listen.

Final Thoughts:
Sibyl got lost in the shuffle of pandemic-era arthouse releases in the U.S., but it deserves an audience. With a stacked cast and a slippery story, Sibyl comes Highly Recommended.