Although not made by Universal, the studio behind the Airport films, Starflight One (original title: Starflight: The Plane That Couldn't Land, 1983) very much has the flavor of that quasi-series, and was even helmed by Jerry Jameson, director of the third and arguably best one, Airport ‘77. Starflight One is a tad boring and highly illogical at times, but it's not all that terrible and certainly superior to the last of the Universal films and has better special effects besides, even though it was made on a TV-movie budget. 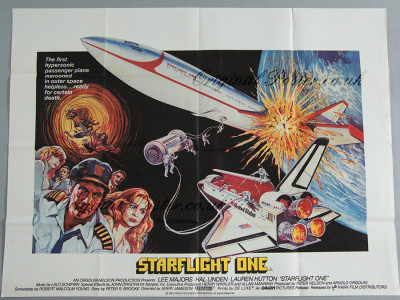 Even faster and more luxurious than the Concorde, Starflight, financed by brooding billionaire Q.T. Thornwell (Ray Milland) - with that name what else could he be? - is the first of an intended new line of hypersonic commercial jets, in this instance, flying from Los Angeles to Sydney, Australia in just two hours.

Despite concerns from Starflight designer Josh Gilliam (Hal Linden), the flight is remarkably routine if historic, pilot Cody Briggs (Lee Majors) climbing the aircraft to an altitude of 23 miles, aided by scramjet engines. However, media mogul Freddie Barrett, also onboard, insists that his latest communications satellite be launched simultaneously, NASA approval be damned. Of course, a near-collision results, and emergency evasive maneuvers by Starflight to avoid the uncleared launch send the plane out of the atmosphere completely and into orbit, unable to return.

Jerry Jameson's Airport ‘77 was exceptionally glossy and, for the most part, very well-made with an all-star cast. However, the next and last of the Universal films, The Concorde -- Airport ‘79, was obviously influenced by the success of Star Wars and attempted similar special effects that not only looked horrible, but apparently drew money away from the casting end of things. Instead of actors like Jack Lemmon, James Stewart, Darren McGavin, and Olivia de Havilland, audiences got Charro, Jimmy Walker, Avery Schreiber, and Martha Raye. Aesthetically, it resembled an extended episode of The Love Boat. Despite this, it cost $14 million, more than twice as much as Airport ‘77.

Starflight certainly cost far less; at a guess I'd imagine around $5 million, but the special effects are much better and it's much less ridiculous. Indeed, the approach is notably humorless. While I wouldn't suggest anything like the Airport series' low-point of Martha Raye's diarrhetic traveler trapped in the toilet and soaked when the Concorde flies upside-down, a little sardonic humor here and there would have helped. The Airport movies were aided enormously by George Kennedy's Joe Patroni, the only continuing character in those films, as well as Lloyd Nolan in the first one and Darren McGavin in the third, all fine character performances.

Starflight lacks any actor or character like those. Hal Linden's Gilliam might have worked better had the part been recast with a more colorful actor like Kennedy or, alternatively, if the filmmakers really wanted "intense, serious guy" they should have gone with someone who does that well, such as Robert Lansing. Linden, so good as Barney Miller, is out of his element and looks utterly lost throughout, a bit like watching Jason Robards attempting Brutus in Julius Caesar.

Linden's performance is just one reason the first-half of Starflight plays so dull. Another is the decision to have the airliner in a zero-gravity environment, scientifically accurate but unwise given the movie's tight budget. Instead of passengers and crew floating all over the aircraft, everyone grabs hold of things and moves very s-l-o-w-l-y and deliberately, making everything seem like it's taking place underwater.

But Starflight becomes more interesting as tension builds: they're running out of oxygen and how will they get back without heat shields they never expected to need? When it's determined, rather unbelievably, that Linden's character needs to be back on terra firma to figure all this out, they decide to transfer him to the space shuttle Columbia using a hermetically sealed coffin being used to transport a dead diplomat. The grim process of removing the body and Gilliam uneasily climbing inside it is inventive.

Another original idea that pays off comes in the form of a pudgy, middle-aged electrical engineer terrified of flying, Joe Pedowski, drafted into putting on a spacesuit and having to go outside the ship for a spacewalk repair job, anticipating some of the basic concepts of Gravity decades before that film. Playing him is actor Pat Corley, best remembered as the bar owner on Murphy Brown. He's terrific and the film needed more characters like his, instead of dreary melodrama involving pilot Cody's unhappy marriage to wife Janet (a typecast Tess Harper).

Anticipating a theatrical release in foreign markets, Starflight spent way more than average on its special effects, supervised by Star Wars effects director John Dykstra and his Apogee company. The movie still resorts to grainy NASA stock shots here and there, but Dykstra's careful lighting and good miniatures are far more believable than anything in The Concorde.

Shot for both 4:3 televisions and 1.66:1 theatrical screenings, Starflight One utilizes a new 2K master that's perfectly fine and unspectacular at once. The DTS-HD Master Audio (2.0 mono) is very early-‘80s TV but okay for what it is. Optional English subtitles accompany this region "A" release.

The one supplement, billed as a trailer, plays more like the kind of sales video used by production companies to sell their wares at international film markets. Better than nothing at all, I suppose.

If one catches it in the right frame of mind, Starflight One offers harmless, moderate fun. Overall, it's mediocre, but it does have a few interesting concepts amidst its many absurdities and generally slow-pace. Rent It.